Taking the Plunge in Pohnpei 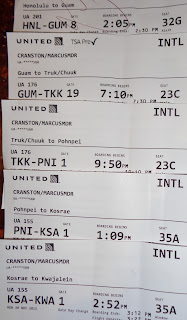 I'm always amused by the little ridiculous moments associated with travel. After saying good-bye to my family in Honolulu, I dropped off the rental car and went to check in. I was particularly proud of myself for finding a one-way frequent flyer ticket from Hawaii to Kwajalein, Marshall Islands with a 13-hour stopover that allowed me to visit Pohnpei in the Federated States of Micronesia. However, it wasn’t until I printed my boarding pass that I fully realized the extent of travel planned for the next couple days. When I clicked on "print", the boarding passes just kept coming…FIVE in total!
My first transit was in Guam and there I had one mission…find cookies. I was determined to get Chamorro chip cookies for the people from Guam that I work with and despite a short late-night stop, I was successful. The next stop was Chuuk (a little more exotic, or maybe rustic). It was a short 40-minute stop for the "island-hopper" and only two of us chose to deplane and join 3 others in the departure hall. When time to reboard, the airport agent proceeded with a very formal announcement, pausing and waiting after calling out each boarding zone - even though none of the five of us were disabled, traveling with children, military in uniform, business class or in zones 1, 2 or 3.


My time in Chuuk allowed me to complete customs and immigration forms. This was my 120th country to visit, but the Federated States of Micronesia version of these forms still presented me with a few unique challenges. The immigration form was straight-forward, but the customs form was a full 2-page, 8.5 x 11 inch paper form with some questions that puzzled me. The third question on the form asked how long I was staying, with two options for answers. I could list the number of days or check a box stating I was transiting for a “few hours". By checking the transit box, which was technical correct, I could “stop here”, even though the rest of the questions clearly applied to me. Once again my idea of a transit stop didn’t conform to the norms of travel. Next, identifying my residence didn’t involve entering my address (as in pretty much all other countries I’ve been to), but rather selecting from a limited list of countries, which I assume represent the most common countries that send tourists to FSM. If you select USA, you then have to choose a region: Pacific, Mountain, Midwest or Atlantic. Which one is Las Vegas in? And what would I have done if I still lived in Mississippi? And what if my wife and I had stop here for our honeymoon after getting married in Malaysia, back when she was still a Malaysian citizen?

I finally arrived in Pohnpei around 1:00 AM. I was very happy to see Robert, who gave me a ride to the hotel and let me know that he would be my guide the next day. I wasn’t so happy to hear we needed to leave at 6:30 AM, due to my limited time on the island. The next morning, when I asked Robert how long it would take to get to the ruins of Nan Madol, he said 1-2 hours - depending on “if you drive fast”. I was frightened by flashbacks to some of my other “drive fast” experiences, in places like Guatemala, Portugal and Georgia. I was even more alarmed when he spent the first 20 minutes following a car at 20 mph – thinking I would surely miss my flight that afternoon. However, when the lead car exited, I found out that “fast” was only around 30 mph. This turned out to be for the best considering the number of children, chickens and dogs on the road. In fact the only speed limit sign I saw was posted on the best stretch road and listed a max speed of 25 mph. Driving fast has a whole different meaning here and we ended up having plenty of time for sightseeing and swimming. 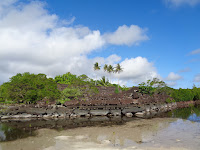 Nan Madol is an archaeological site with similarity to places I've been visited in the Americas, like Tikal, Machu Picchu or Chichen Itza. However, the unique isolated location on the water off a Micronesian island make this a place like no other. Without written references, not much is known about the history of Nan Madol. It is thought to have been built as far back as 900 years ago and was used for religious ceremonies and rulers' houses until the beginning of the 19th century. It wasn't until 1828 that Westerners discovered the site that had been abandoned relatively recently. Today you can reach the ruins by land and walk through many of the site's 92 artificial islets or at high tide, you can take a boat through the canals that have earned Nan Madol the nickname, "Venice of Micronesia". When I went I was the ONLY tourist there the whole morning. The only other people I saw where the desendents of the ruling class that collected 3 separate payments of $2-4 on the short hike to the site. There are not many places left in the world where you can have a world-class archaeological site all to yourself - a truly special experience. 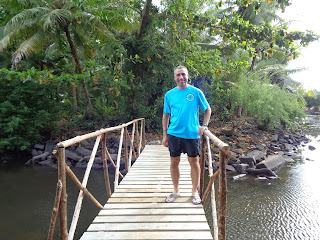 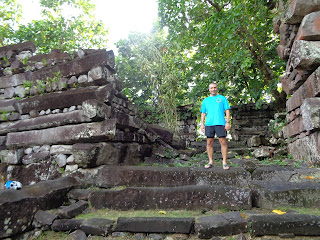 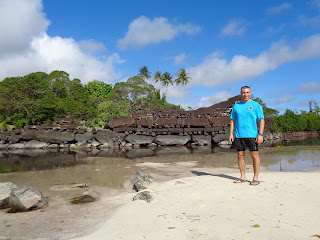 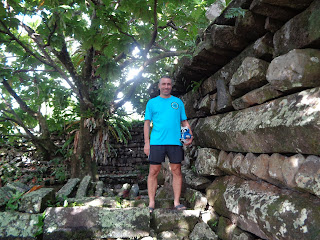 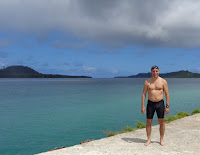 After Nan Madol and a quick stop at an amazing waterfall, I had just enough time to for a mile swim before going straight to the airport. Since Pohnpei is a volcanic island, there are not sandy beaches and activities like snorkeling and surfing are done at a significant distance off-shore. Therefore, we went to a pier where locals gather to swim on weekends and this turned out to be an ideal location for me. Warm, clear and calm water and as Robert put it, “none of the scary sharks."

Posted by Marcus Cranston at 12:17 PM