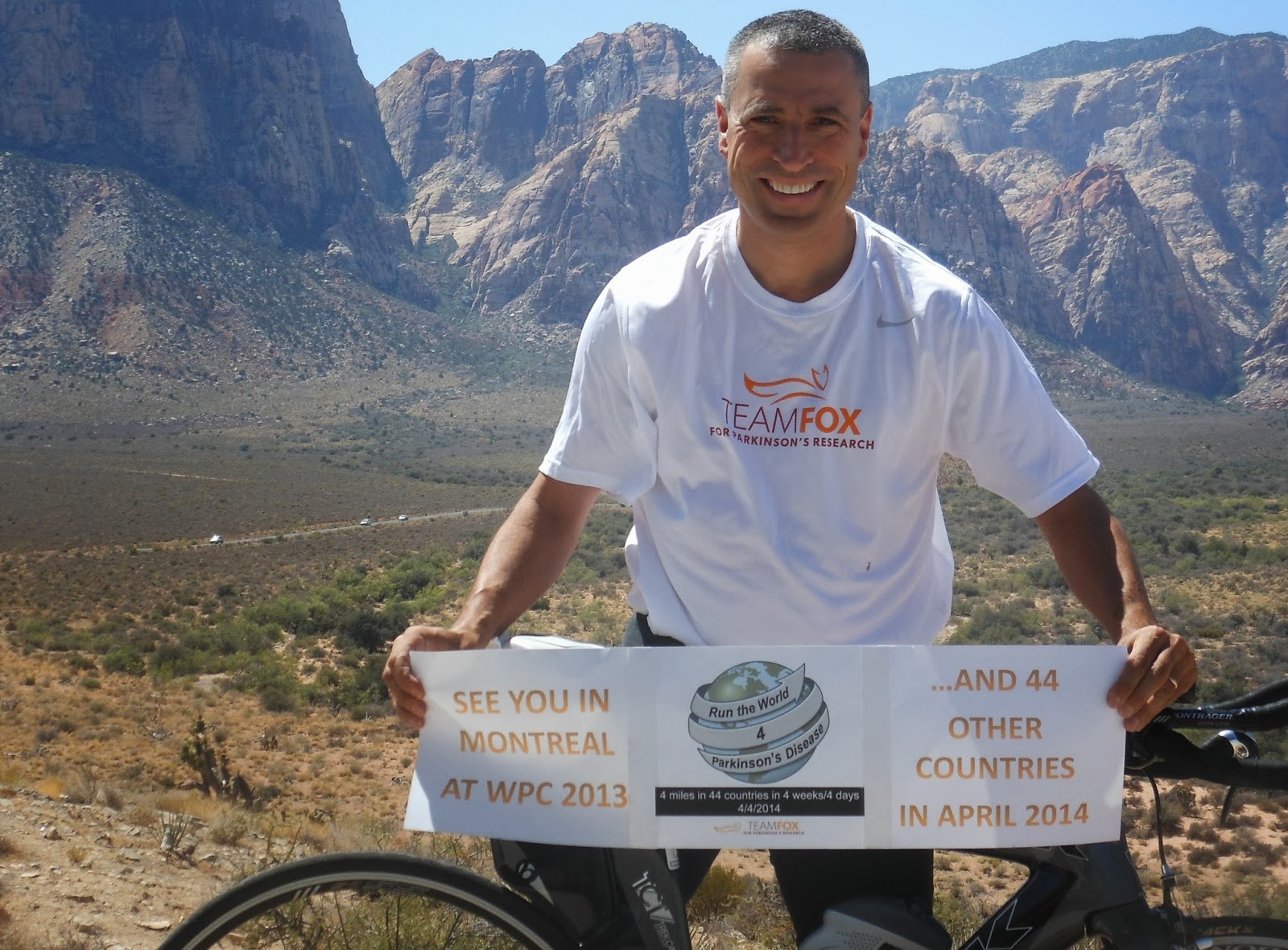 First I want to thank everyone for all the wonderful messages of support for myself, my family and Run-the-World 4 Parkinson’s Disease.  Lila and I were so happy to hear from all of you, including so many who have personal connections to Parkinson’s Disease.
To answer a few of your questions:
-          My idea for this project developed over about a 2 week period.  For the past few years I have been planning to take a trip that would circumnavigate the globe around the time that I retire from the Air Force.  My plan was to divide the trip into 3-4 segments and have different family members meet up with me for the different segments.  In addition, over the past year I have been trying to find a Team Fox event to participate in - originally thinking about doing one of the triathlons in which they are involved.  I am not sure how I merged these two ideas into one project, but once I did the basic frame work for Run-the-Word was put in place pretty quickly.
-          The 444 theme was Lila’s idea to give us a unique identity for this project and the foundation that we are in the process of establishing.  As she likes to tell me - she is full of good ideas!
-          Packing for the journey, will be light.  A small backpack that I can run with and essentials including, a few of my Run-the-World  t-shirts, extra running shoes, tablet, camera and just a few other items.  The heaviest item might be my passport, with all the extra pages for visas.
I am currently on my way to Montreal to attend the World Parkinson Congress.  I became aware of the conference a few months ago, shortly after I began considering this project and it seemed like a great meeting for me to attend for several reasons.  In addition to providing continuing medical education credits for medical licensing, the conference offers a look at the latest research activities, sessions designed for patients and hopefully will be a great opportunity to network and find opportunities to promote my project.  This will be the third time the meeting has been held, with previous conferences in Washington, D.C. and Glascow, Scotland.  You can see my photo in the meeting photo album and learn more about the meeting on the meeting website:

In addition to learning more about Parkinson’s Disease and promoting my project, I’m going to use this trip to test drive some of my travel blog plans.  In the coming months I hope to build a community with an interest in travel to help me plan Run-the-World – designing the run courses, selecting landmarks for my “official country photos”, recommending foods to eat, and generally planning an itinerary for the tourist that has 3 hrs to explore a city (I am pretty sure that guidebook does not exist).

I will be in Montreal Monday afternoon to Friday afternoon, but my time to explore the city will be limited by a full conference schedule.  I have 2 personal goals on my “to do” list in Montreal:  1) See Olympic Stadium, which hosted the 1976 Olympic opening ceremonies, and 2) see a  Montreal Canadiens hockey game  (their season opening game against their rival, the Toronto Maple Leafs, happens to be on Tuesday and I already have my ticket).  I’ll write more about my reasons to have these items on my personal travel checklist in my post from Montreal.  Beyond that I am looking for suggestions for sites to see, things to do, places to eat, etc.  If you have been to Montreal, know someone that has been to the city, read something about the city…please post a comment and give myself, and others that might visit the city in the future, some ideas.
Finally, I am planning to use surveys to select a landmark site for an “official photo” in each country during Run-the-Word and will try this for Montreal.  Here are the DK Guide thumbnails for each site on my Montreal poll:
-       Hotel de Ville:  the city hall was created in grand French Empire style in 1872-78, and restored to its glory in 1922.  The marble hall features a statue of the first mayor.
-       Basilique Notre-Dame-de-Montreal:  in the center of Place d’Armes sits the Basilica, Montreal’s oldest and grandest Catholic church. Originally built in the 17th century, a new building was commissioned in 1829.
-       Centre d’Histoire de Montreal:  this museum is housed in a handsome red-brick fire station, which has a gracefully gabled roof built in 1903.
-      Olympic Stadium:  finished in 1976, this magnificent hall does justice to the world stars and players who performed here.
Check out the poll in the margin and place your vote.  I’ll include a photo from the winning site in my post from Montreal later in the week.
As always thanks to all for your interest and support.
-Mark

Posted by Marcus Cranston at 7:24 AM