Albania, Montenegro and Bosnia & Herzegovina – A Glimpse at the Balkans

Years ago I read, or at least started to read, Robert Kaplan’s Balkan Ghosts.  I remember only pieces of the history and cultural background that defines this region.  It was good to experience the countries close-up, but with my brief stays I left with only small pieces of information – much like my faded memories from Balkan Ghosts. 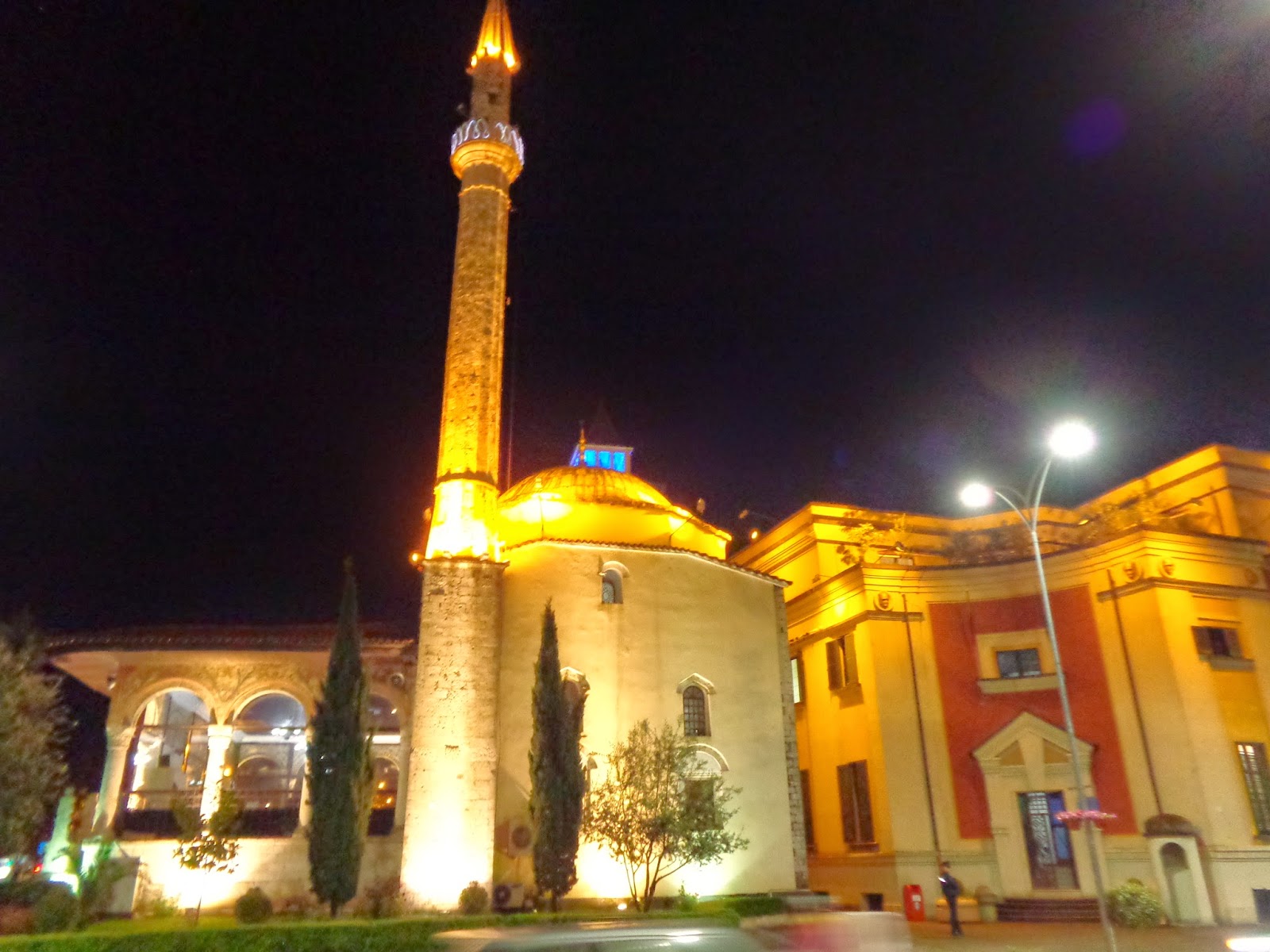 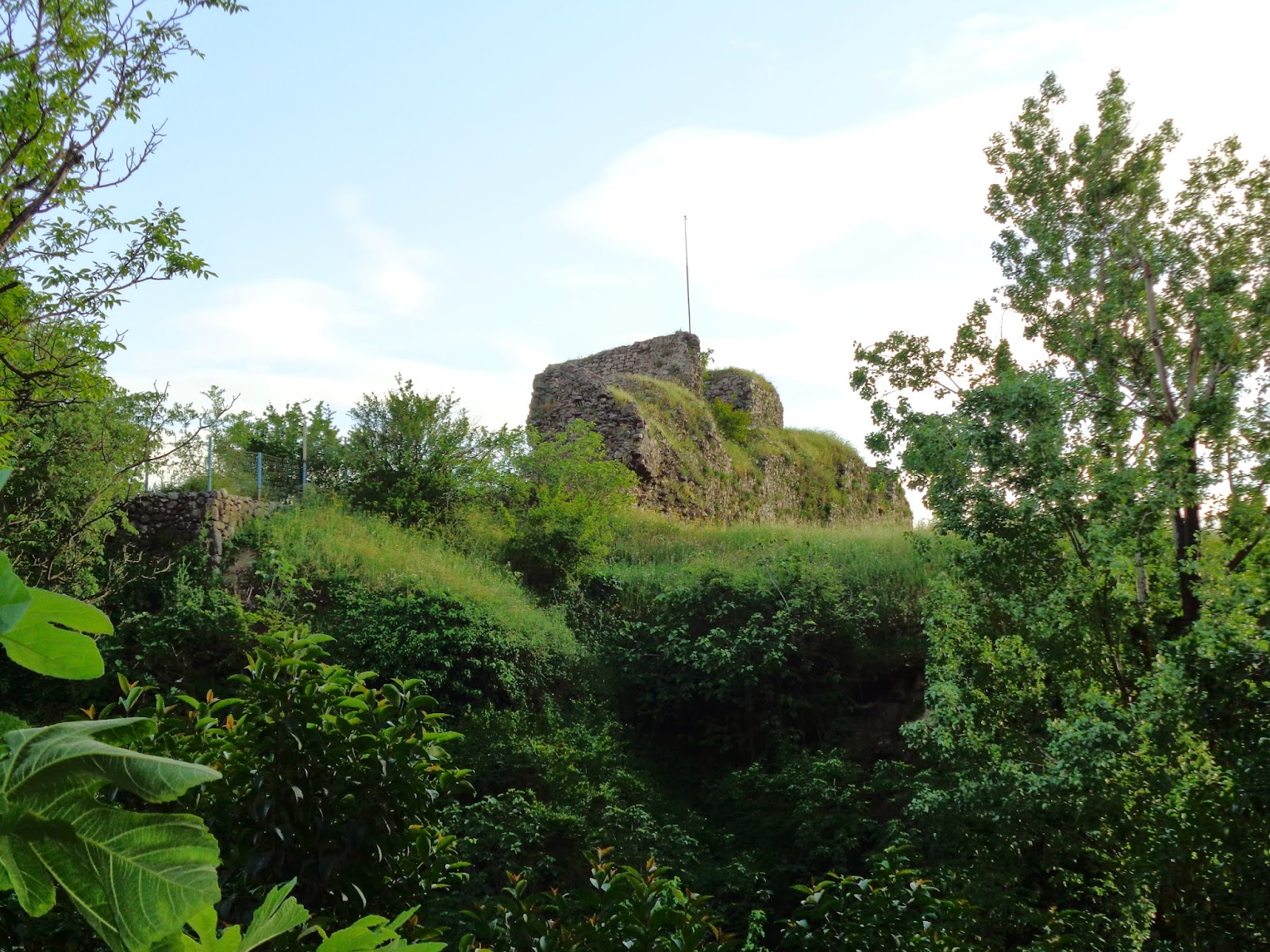 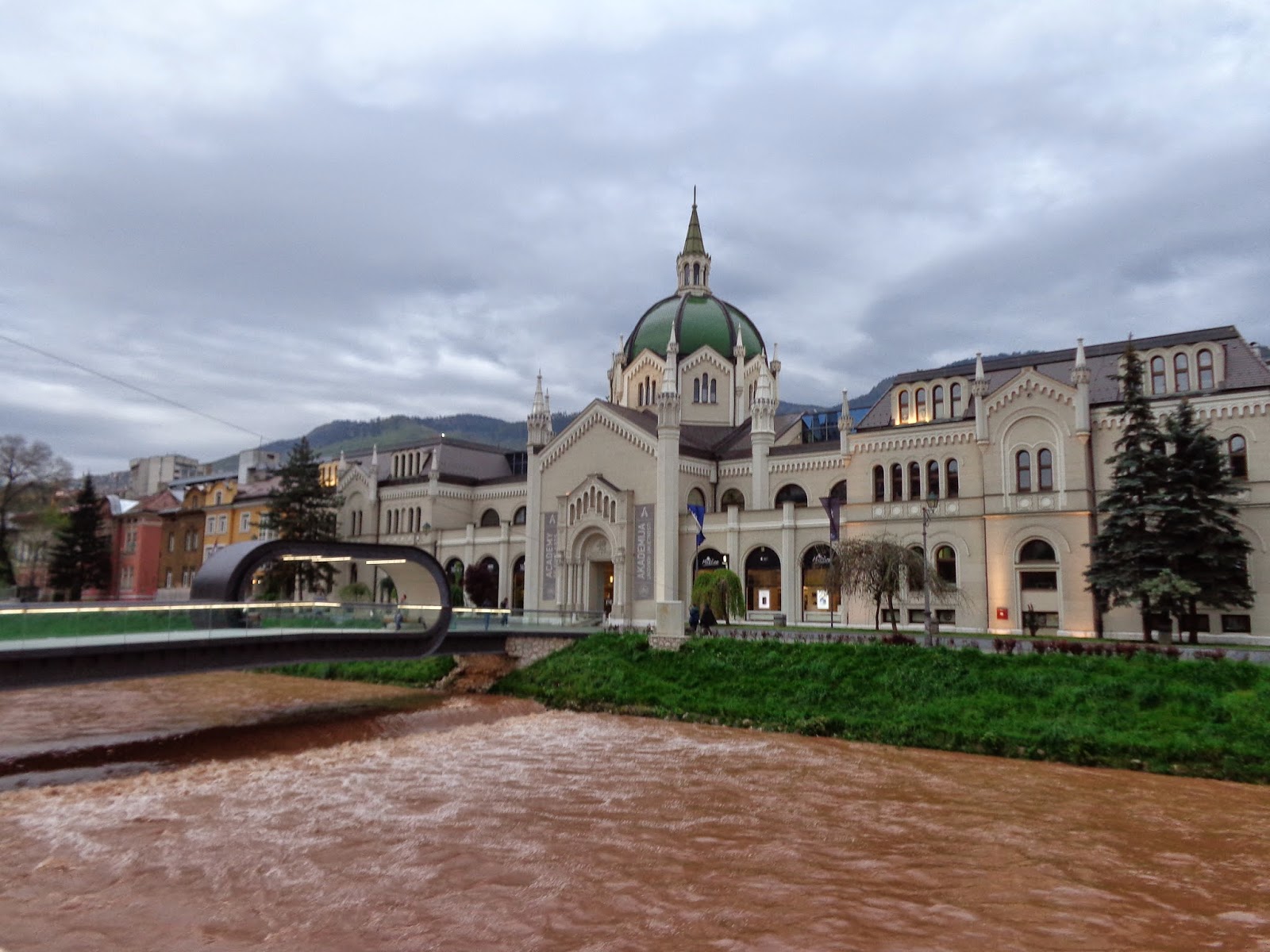 On my arrival in Tirana, Albania I was met at the airport by Rajmonda Spirolli and her husband.  Raymonda has Parkinson's and is a member of the support group in Tirana.  Our contact had been arranged by Dr. Mira Rakacolli, who ironically was in the United States for the American Academy of Neurology annual meeting, while I was in Albania.  However, my discussions with those with Parkinson’s and their families in Albania continually returned to activities of Dr.Rakacolli and it was clear that her patients adored here and the success of the patient support group in Albania was largely due to her involvement and dedicated leadership. 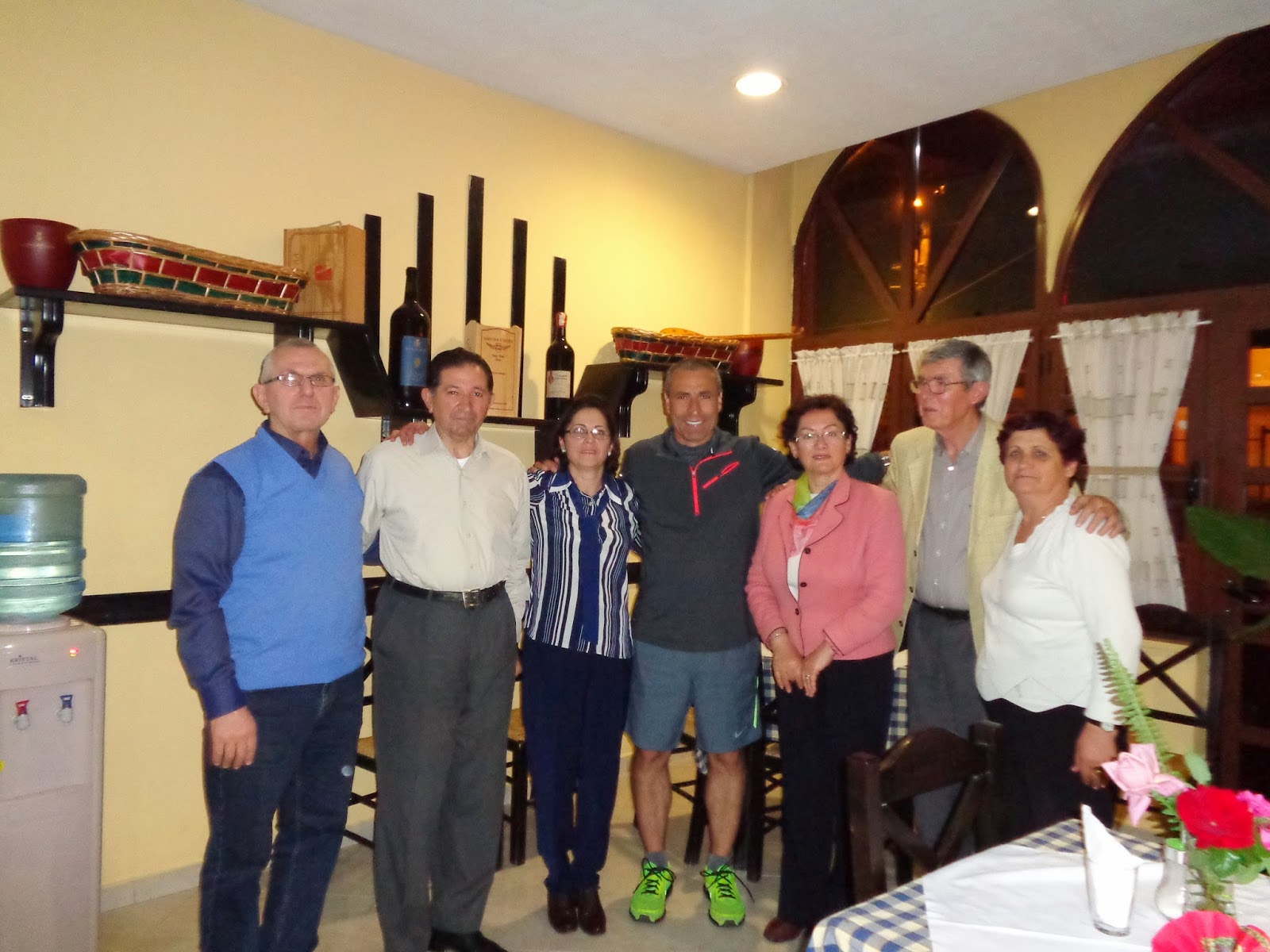 Although the 3 couples and I discussed a wide variety of topics, the one issue that our conversion seemed to to keep coming back to was the situation with medications in Albania.  The group had many concerns that I had heard in other countries…the government controlled listed of reimbursable medications, question regarding access to any new medication that might be more effective, and what medications did I take.  There were also other concerns about medications that I not heard or considered before.  For example, the quality of medications available through the government reimbursed payment or private purchase.  The group was well versed in the sources of medications - Turkey, Italy, India, etc.  One gentleman stated that he pays the equivalent of $150 of his $250 per month pension to purchase medication for his Parkinson’s.  The insight that I gained into this issue in Albania, highlights the experience I have had and the things I have learned by meeting with those with Parkinson’s in so many countries around the world. 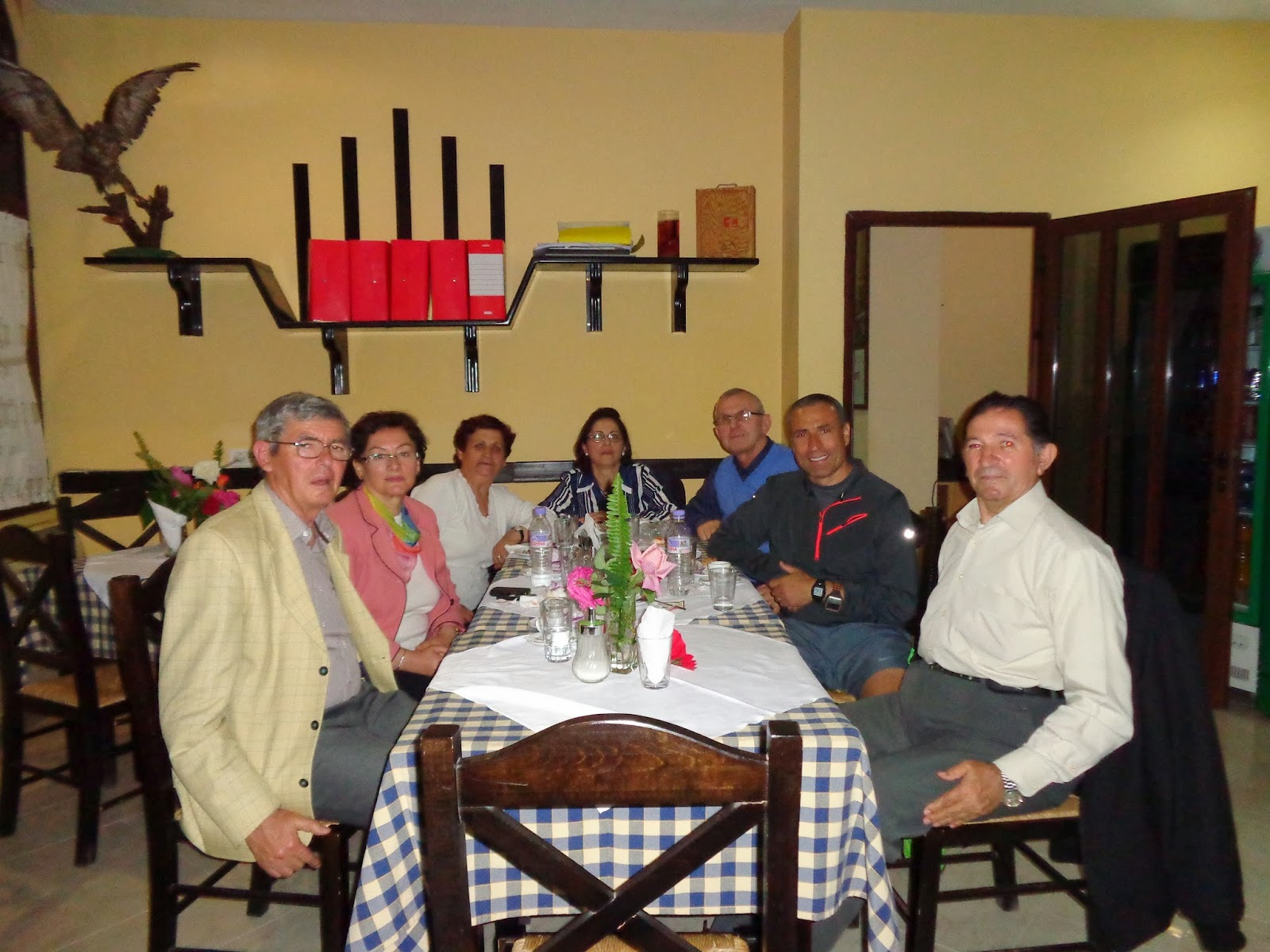 After meeting, I had a late night run and got some beautiful views of the city center in the night light. 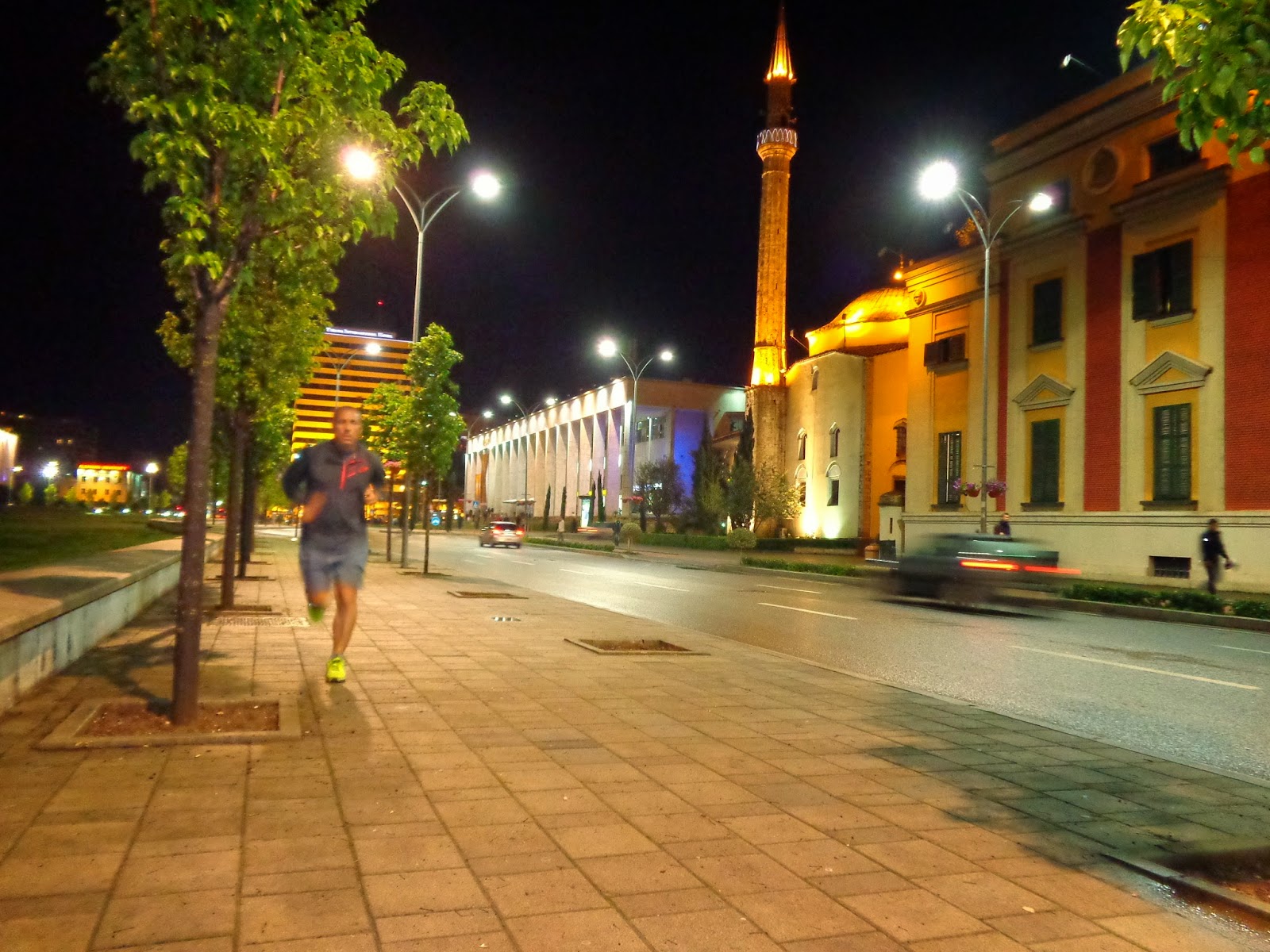 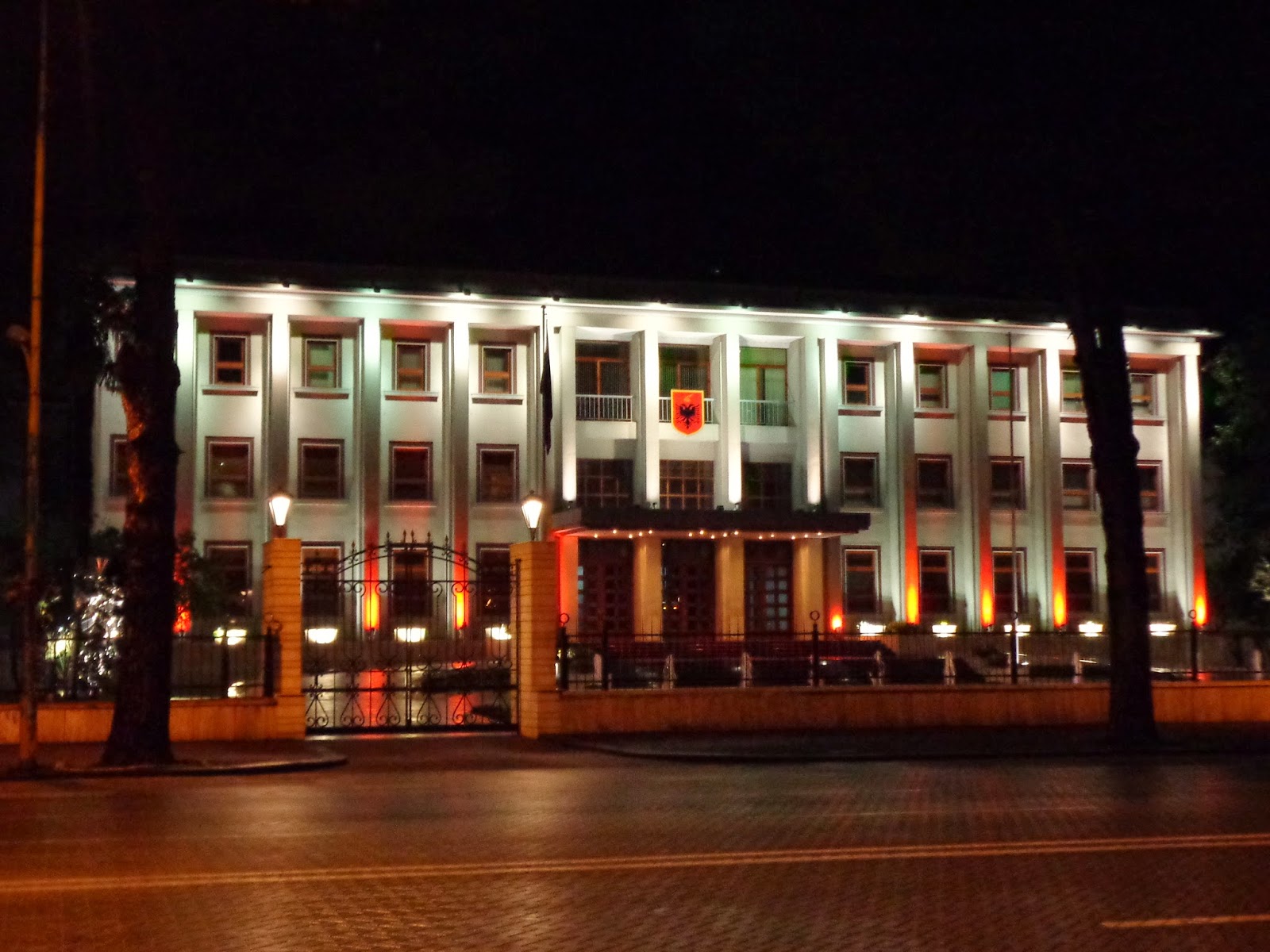 The travel from Tirana, Albania to Podgorica, Montenegro is not what you would expect between two neighboring capitals.  I am not sure if the lack of a direct bus route is due to political reasons or lack of an economic incentive, but I had read that the best way to travel between the cities was to take a bus to Shkodra (a town near the border) and then find taxis/minibuses to cover the rest of the distance.  During my stay in Tirana, I received 3 different sets of instructions from those at the hotel reception desk on how to find a bus to Shkodra from Tirana.  The last man appeared to have the most up-to-date information, telling me that “there have been problems” – presumable traffic accidents - and apparently a new bus location was being used to try to stop the unofficial minivan use. After a 20-30 minute walk and a few questions along the way to ensure I continuing in the proper direction, I found a traffic circle and on one side a group of buses were lined up.  Outside one of the buses a young guy was shouting something that sounded like Shkodra and using fingers, he was able to inform me that the bus would be leaving in an hour.  The bus ride itself turned out to be most interesting for the cast of locals waiting along the side of the road and continuously hopping and off the bus, which presumably added to the bus's profit margin and gave the ride more of a local bus feel. 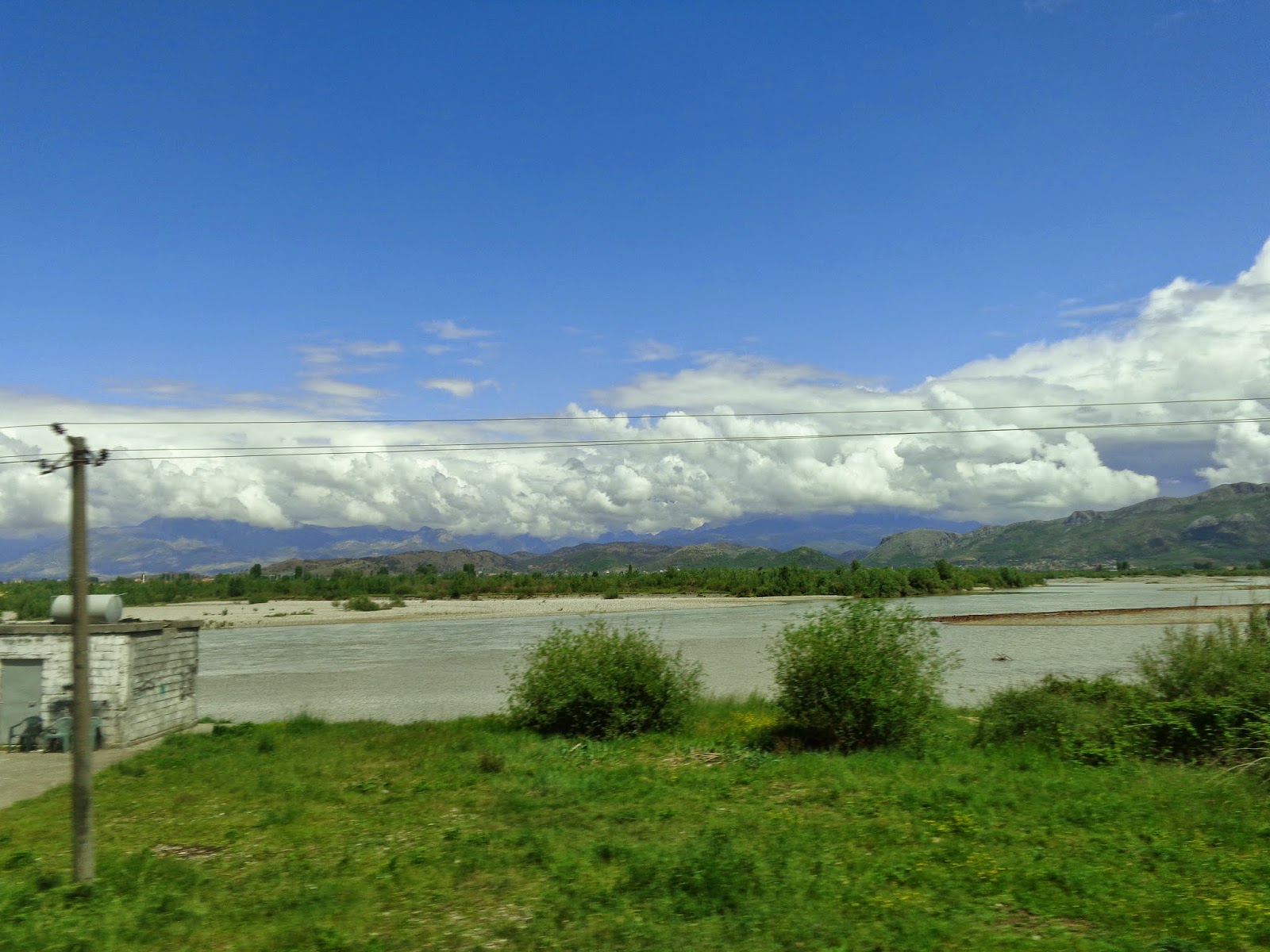 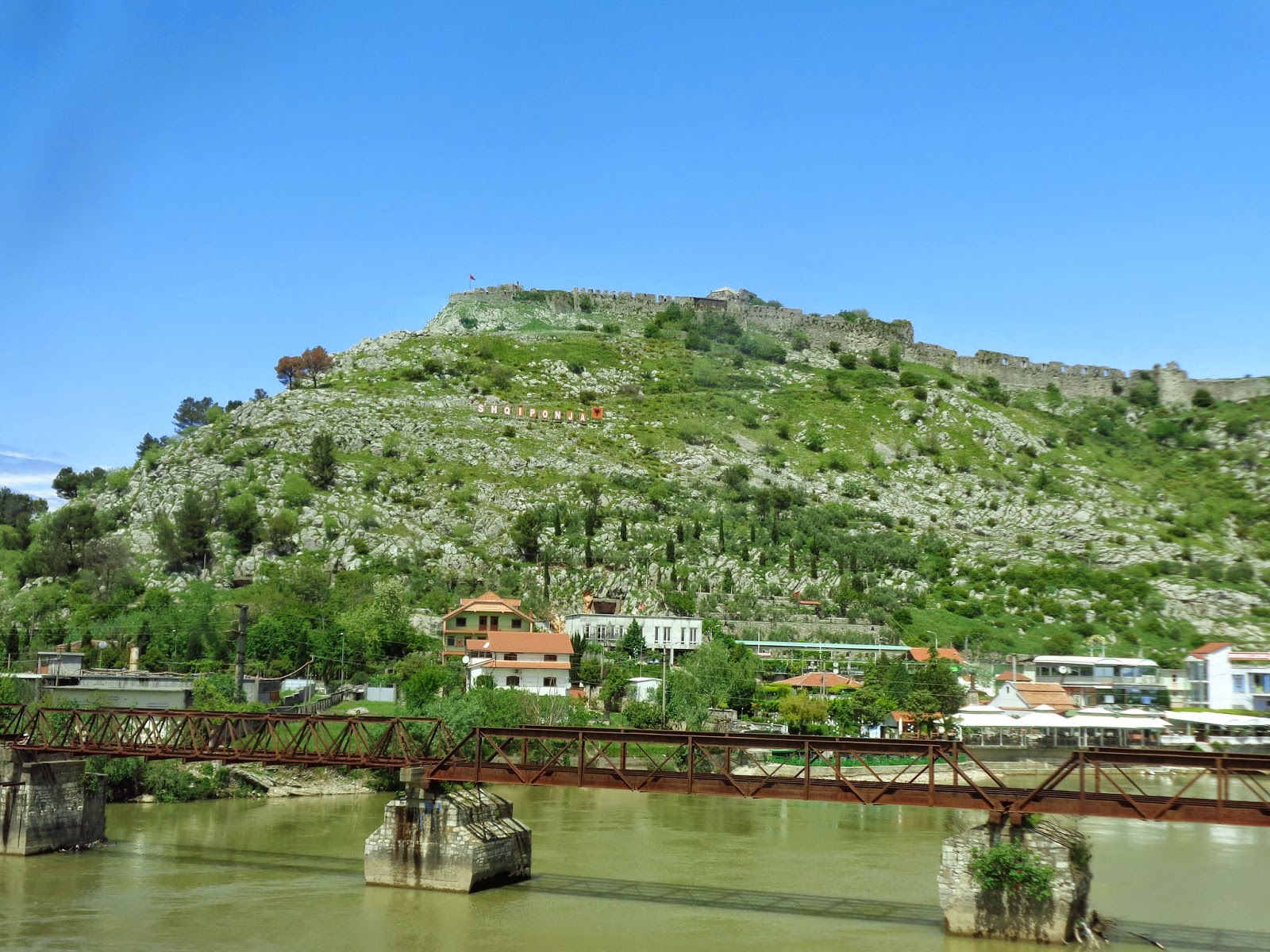 Getting from Skodra to Podgorica was supposed to be the more difficult part of the journey.  The websites and guidebooks I read suggested the trip would most likely require 2 taxis. One to get the border, in which case there would be plenty to chose from in Skodra, and one to get from the border to Podgorica, which could be harder to come by. When I got off the bus in Shkodra, there were certain plenty of taxis to chose from and most that approached me were offering rides to Podgorica, so I was feeling a little better about my options at that time.  Surprising the options for food were less common. I stopped half a dozen bars/cafes in the square – all of which only offered drinks.  I finally found a small place that I hesitantly entered - joining the one other customer and the 6 other adults and children who seemed to be a family somehow related to the restaurant staff.  In one young man left the group to be my waiter. He spoke excellent English, so after he brought my food I asked him if he knew about taxis going to Podgorica.  He said “You want taxi to Podgorica?...okay, I find out.”  A few minutes later he offered a price that matched the prices I had read in other online posts and soon I was on my way in a taxi driven by another young man.  My chance-meeting taxi driver had finished a post-graduate degree to teach English and was waiting to get word on the American  “ visa lottery” in the next couple weeks. The houses in the region explained the reason for his desire to obtain the visa.  When I asked him about these houses, which seemed to be quite nice compared to many that I had seen back in Tirana, he explained that most most were built by Albanians that has immigrated to the US and now had plans to return after retiring.  If the driver failed in to secure an American visa, he said he would be hoping to get a government job – which he stated would pay twice the salary of private jobs – but were awarded largely based on political party status rather than ability. 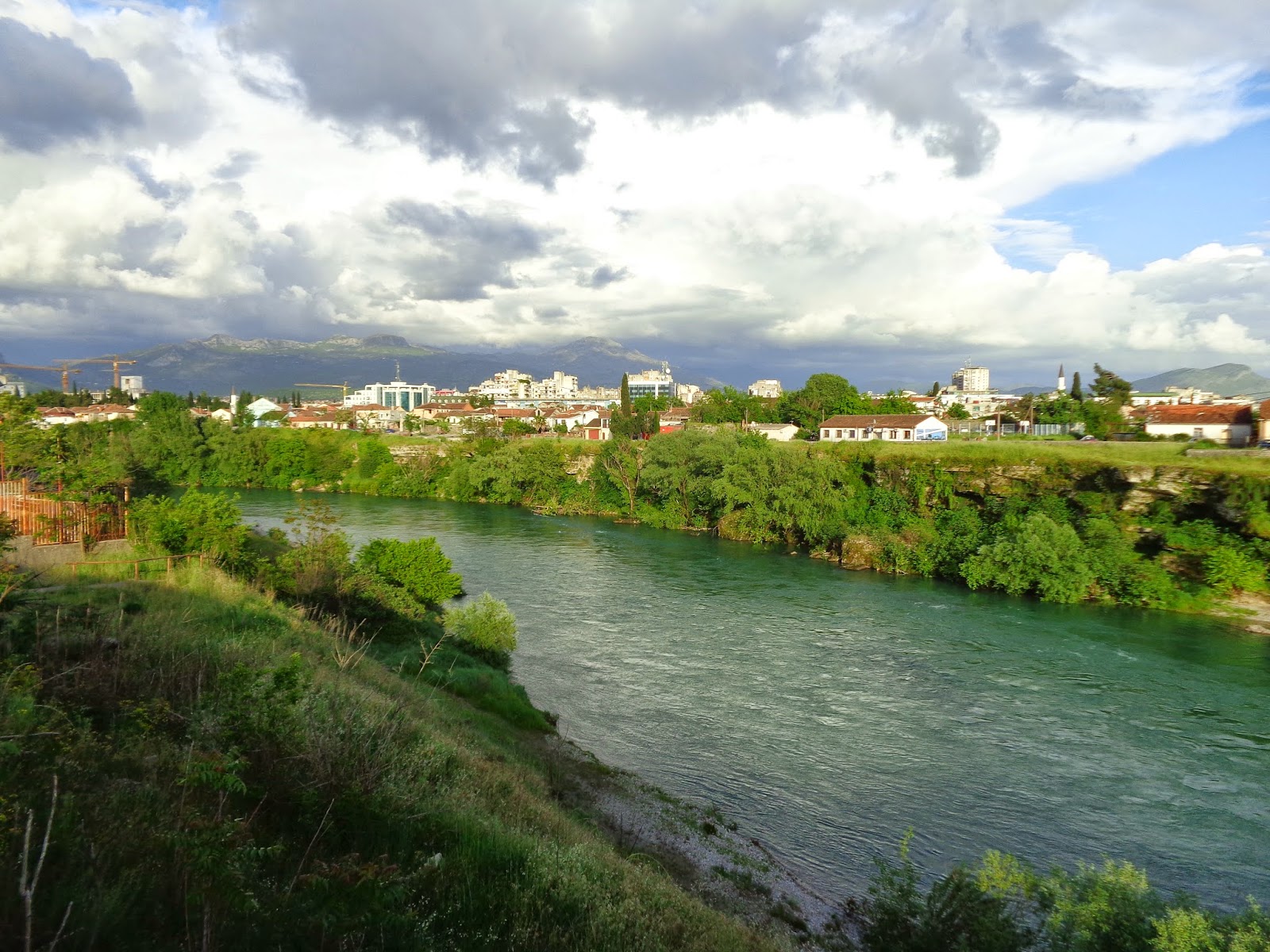 As we neared and crossed the border – and my driver began to let down his guard – I was to see a little more if the underlying ethic tension that I had heard a little about in Macedonia.  At first there were explanations about the warfare tactics the Albanians had used over the years, given the mountains in the area - then talk of lost control of lands – then claims of mistreatment. At the border crossing, the driver was visibly angered by what he felt was unfair treatment and questioning by the border officials.  Once inside Montenegro there were continued comments hinting of resentment – culminating in the statement “actually I hate these people – if I had something in my hand I would kill them all….it is true.”  One can sense the passion in the statement and reading of the history, understand that is based on years of conflict.  However, it would be hard to comprehend by simply looking at the land.  Although we drove across a small border check point - the lake and the mountains on either side of the checkpoint didn’t change.  Because my curiosity was peaked, I asked my driver how one can recognize the different ethic groups – was it physical characteristics, behaviors or language and he let me know, “It is easy.  We are more ruder. No it is true, we like to fight.” 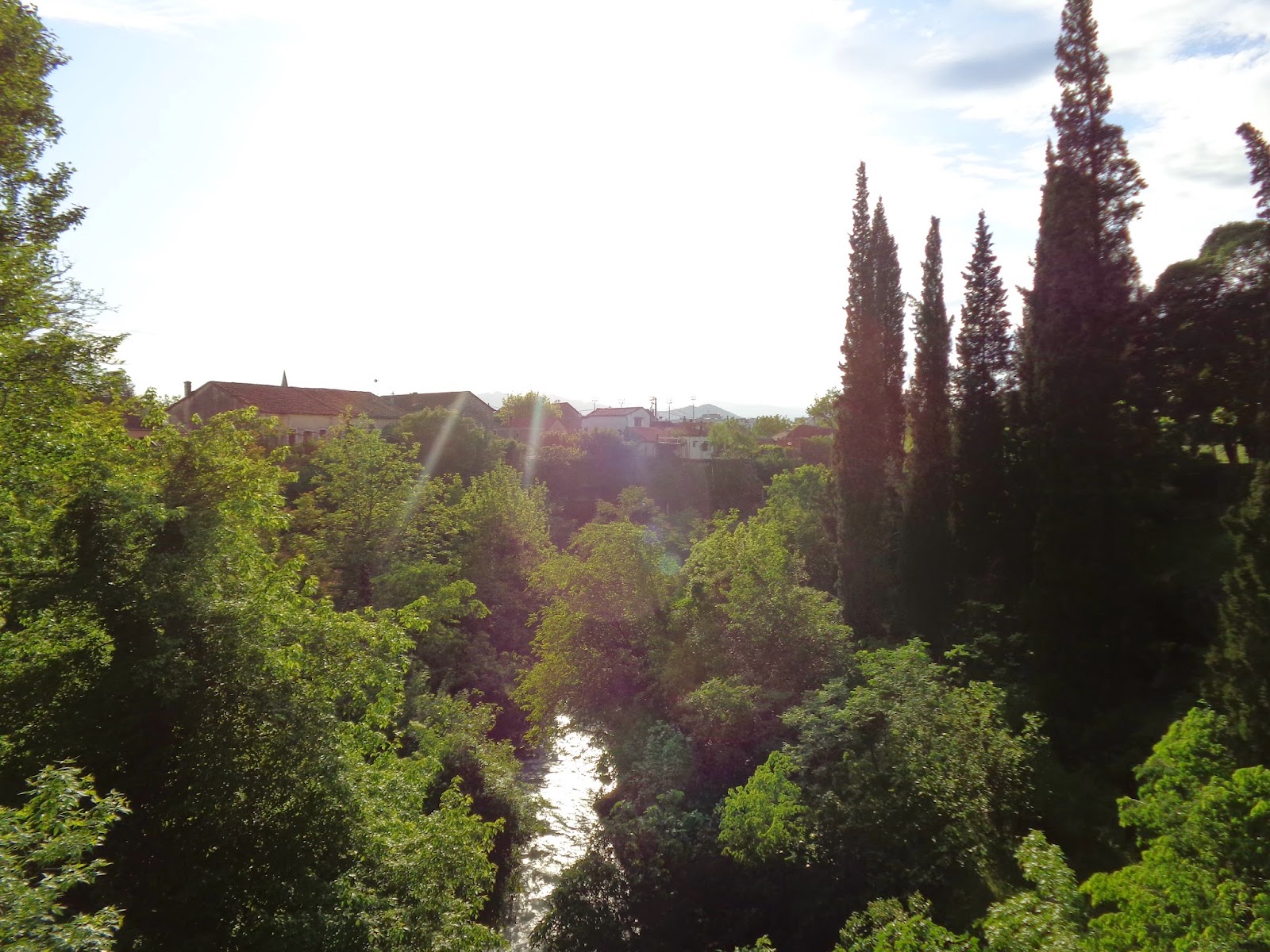 My time in Podgorica was brief, just as was my time in Tirana.  However, my impression matched the things that I had read previously – there were a few interesting things to see in these capital cities, but the more beautiful places in the countries were in some the smaller historic towns.  Podgorica was surrounded by incredible natural beauty in the form of river and mountains, but the city construction seemed to struggle to match or enhance the natural surroundings. 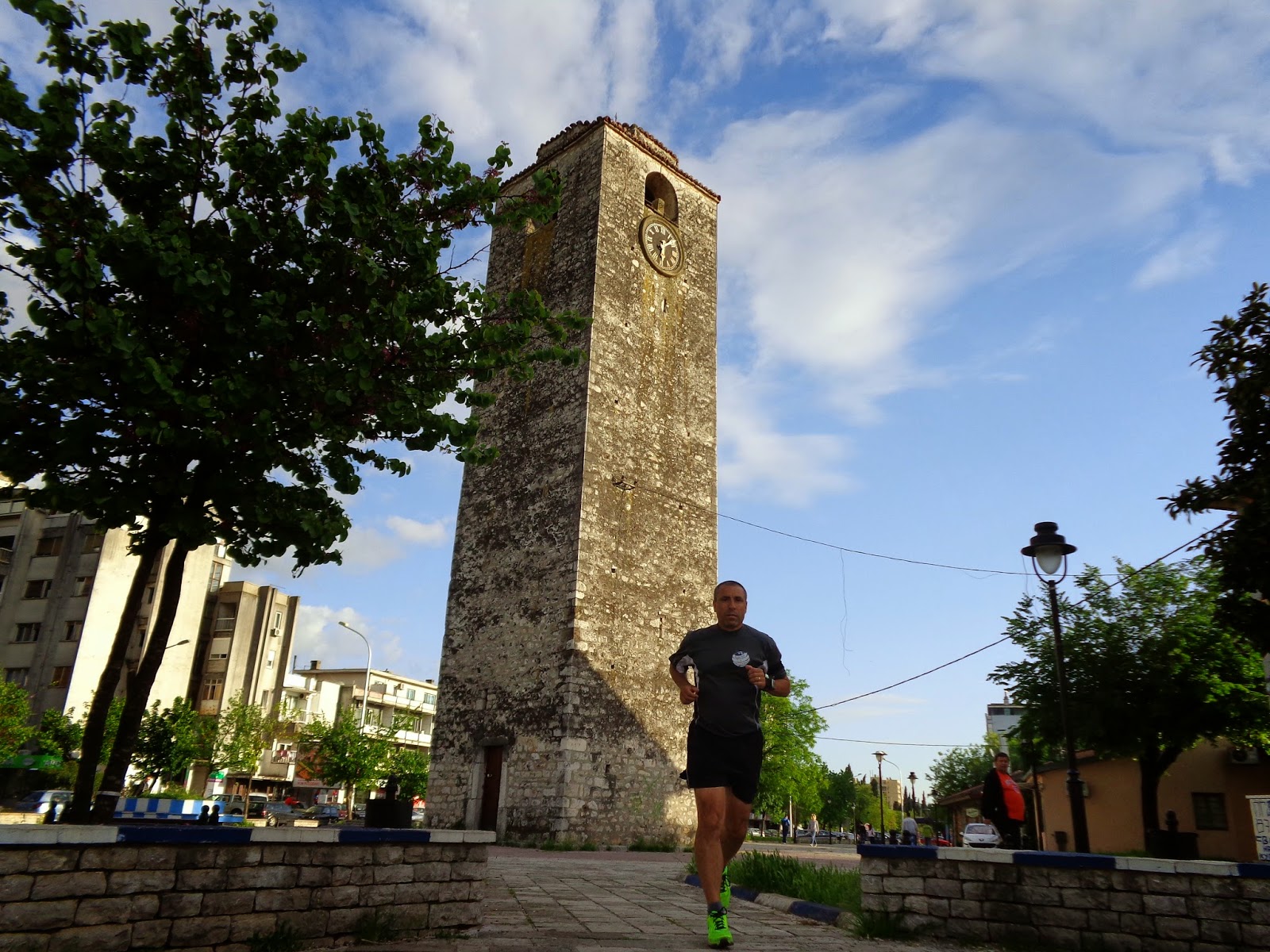 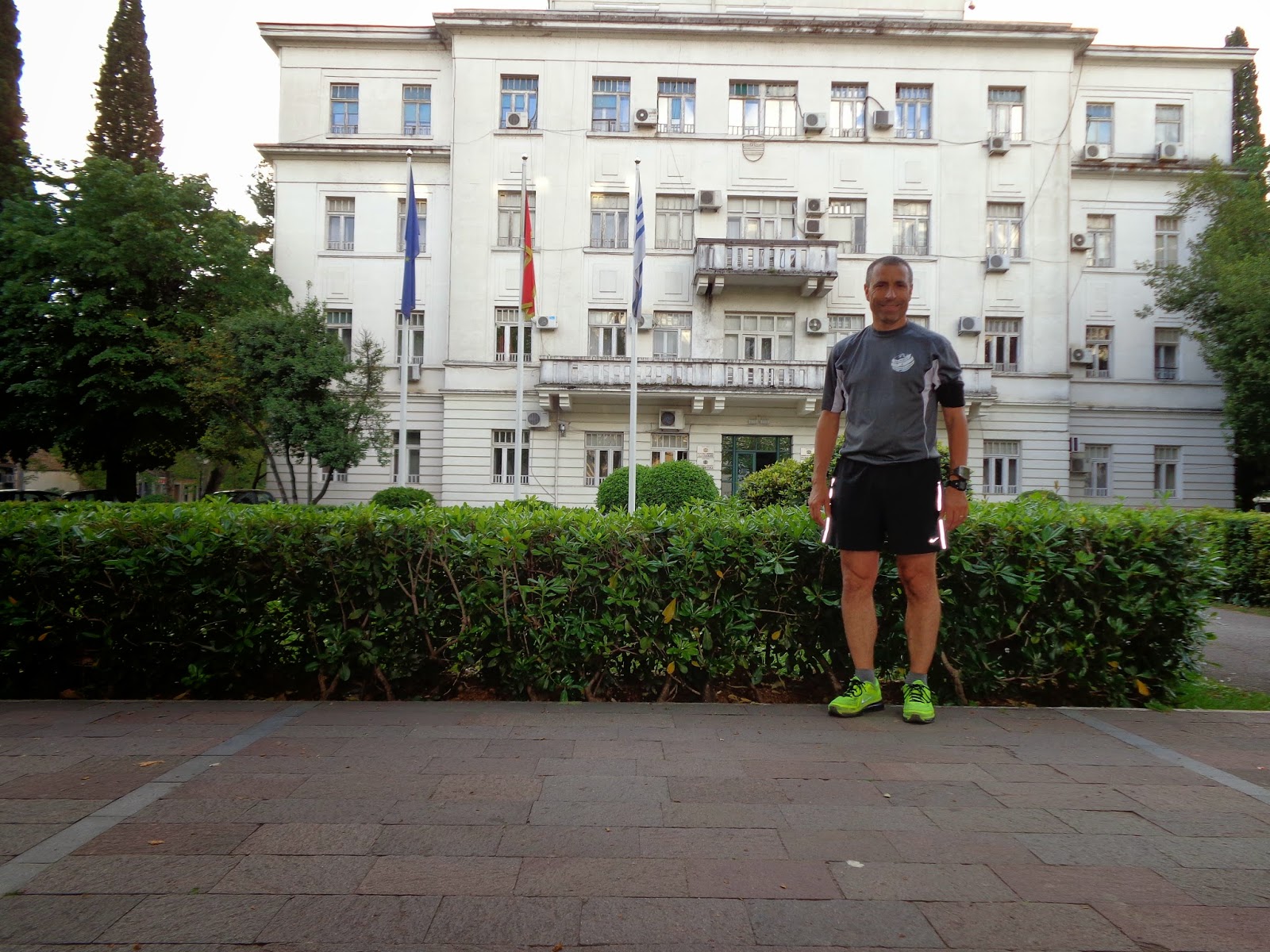 One of the most distracting features of all the cities I visited in the Balkans was the amount of graffiti.  It was everywhere.  Often it was difficult to get a good photo without having some graffiti included.  Even when you looked at the most beautiful buildings, when you looked closer you often would see graffiti. 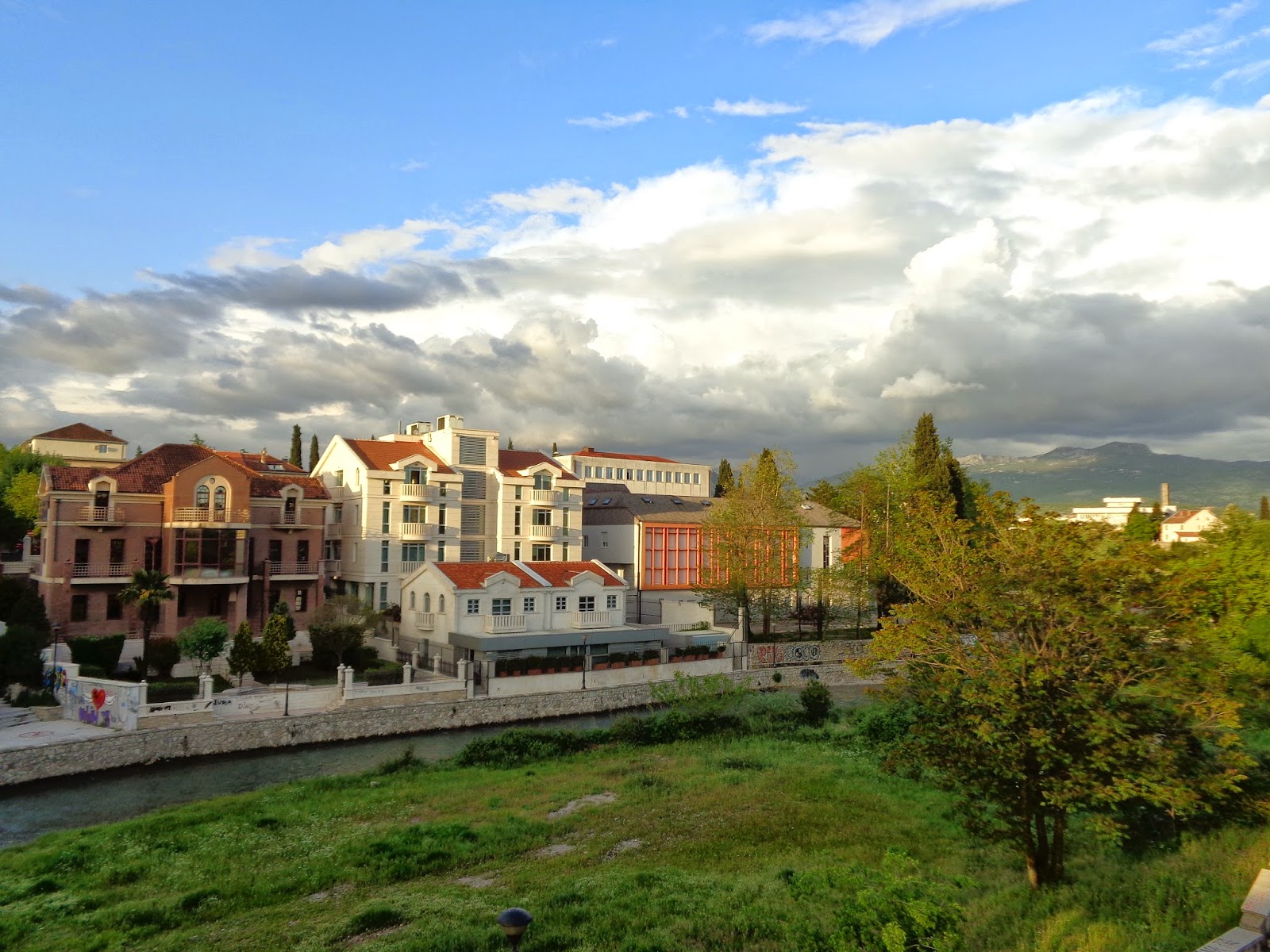 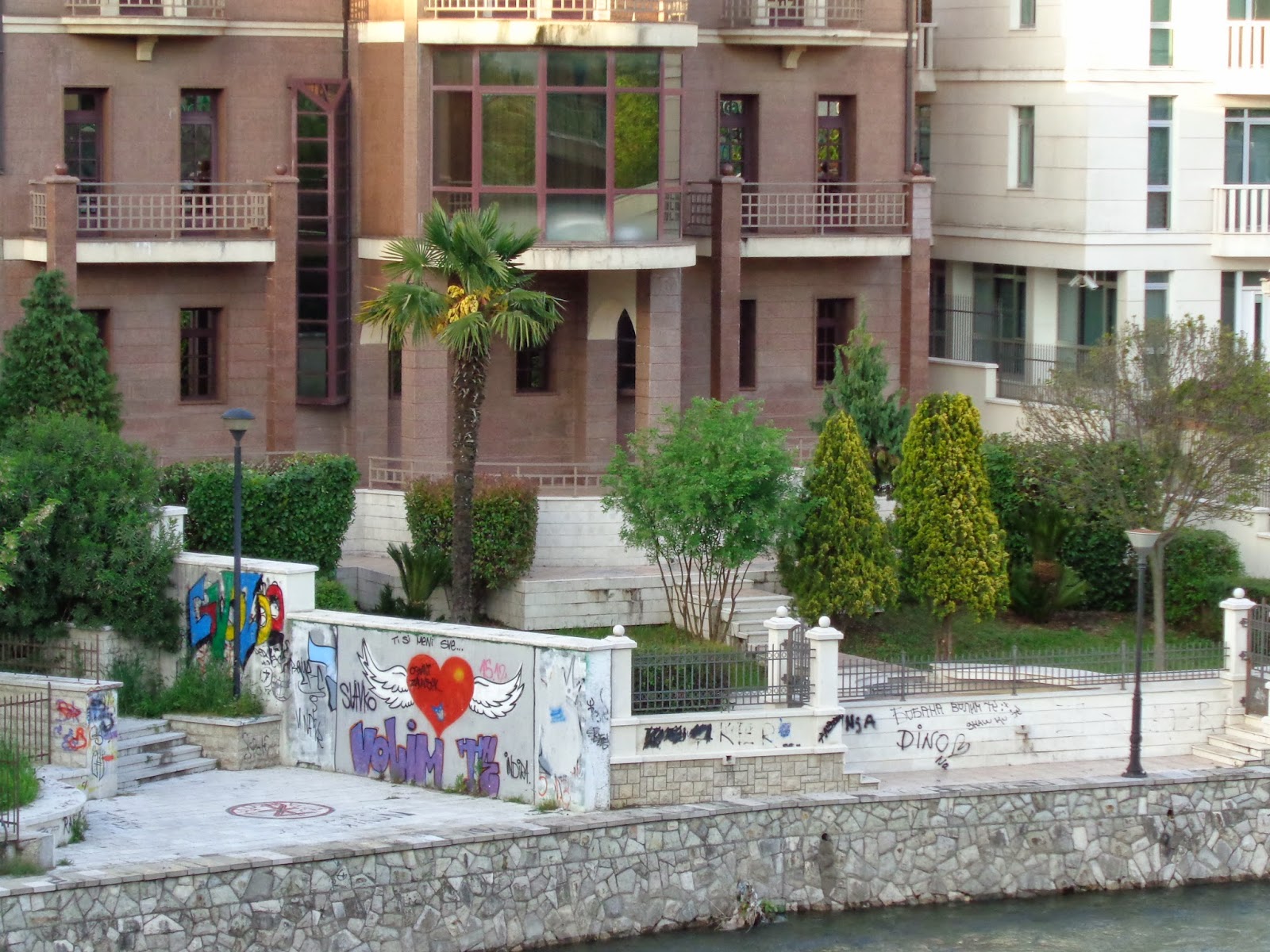 After the short flight from Podgorica to Sarajevo, I felt like I was meeting Tirana and Podgorica’s big brother.  Although a large city with more historical buildings and a larger city center, many of the same features were present.  As with the other cities, while one area might have a stunning sight – the next block could be visually disappointing. 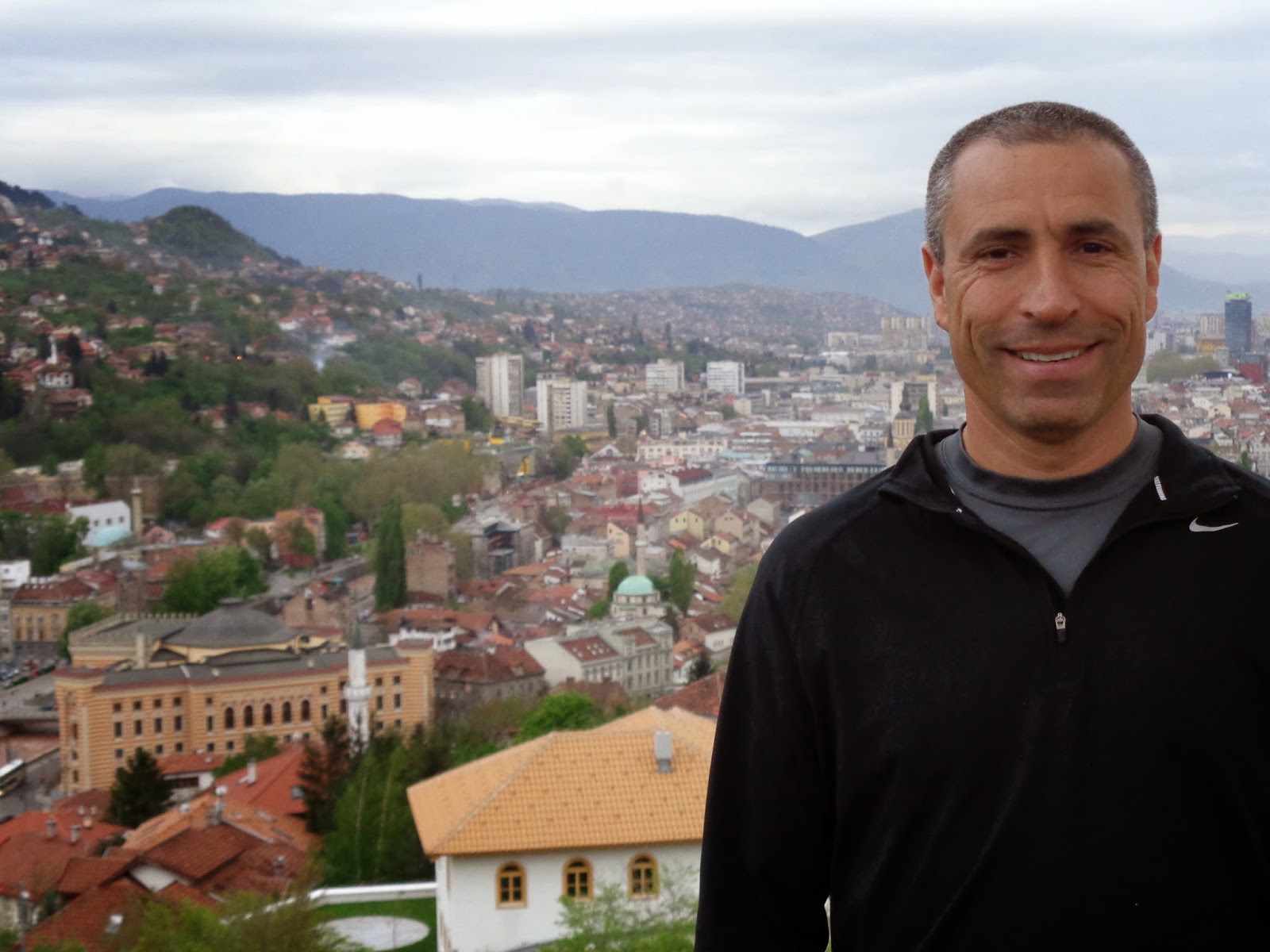 In all fairness, given the history of conflicts - include their recent past, it is maybe not surprising that these cities lack a consistent physical character.  Sarajevo is a vivid reminder of the impact of war in the region, with it’s multiple memorials to the suffering during the siege from 1992-1996. 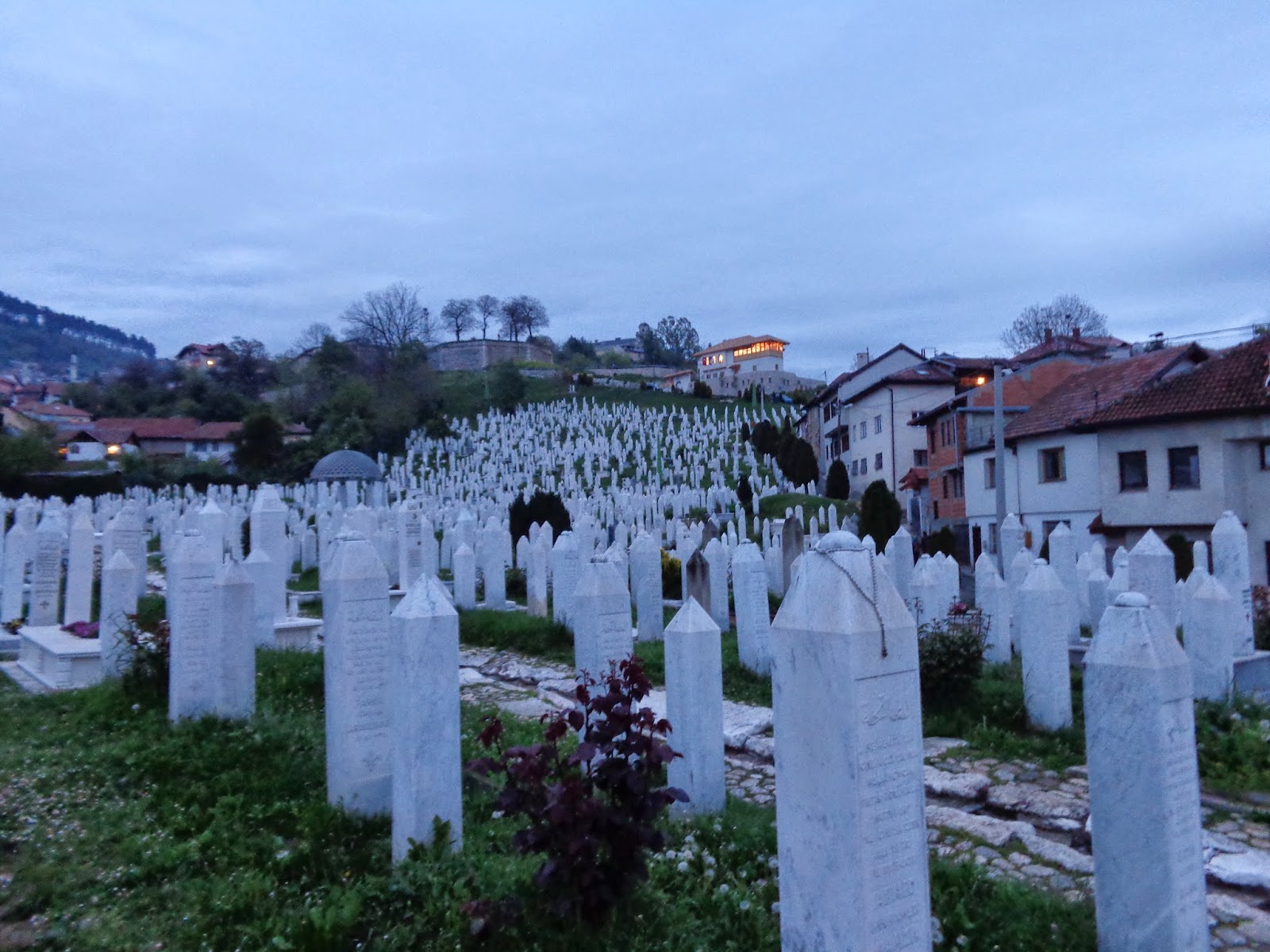 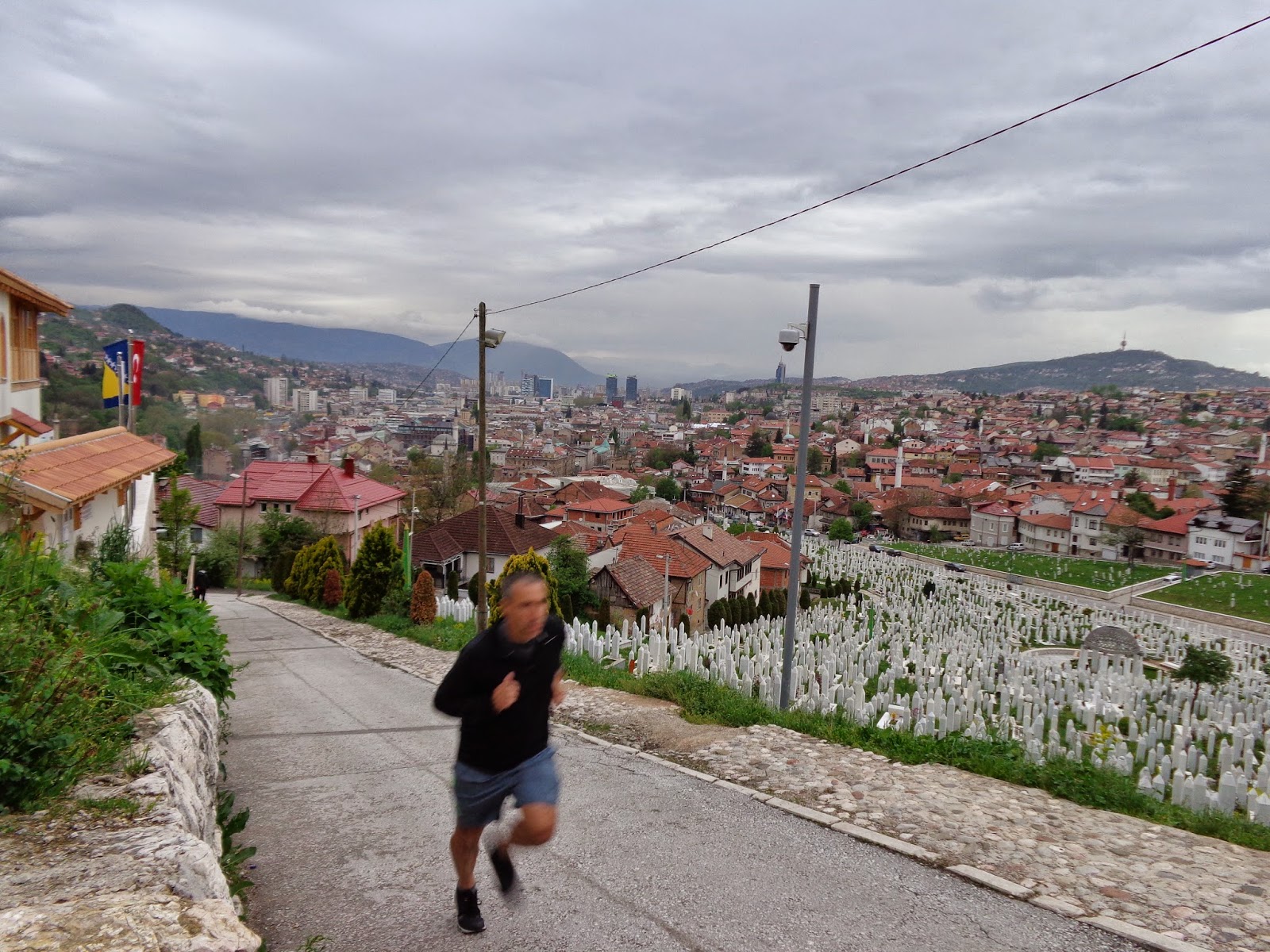 My last few minutes in Sarajevo brought a new sense of reality to all the memorials that I had seen the day prior. Throughout my short time in the city, I noticed many areas where the major of the buildings were like the one in the photo below - covered with bullet holes in differing stages of repair. However, on my way to the airport we hit a traffic jam and my taxi driver decied to take a little detour off the main road.  I saw a large abandoned building that had extensive damage which I assume was from the war.  The taxi driver seemed to sense my curiosity... "front line" he said.  He then pointed to one side of the street and said "Bosnia army" and pointing to the other side of the street and said, "Serbia army".  After that he stated, "Sorry, little English". But seeing the other homes in the area with far more bullet holes than the ones I had seen previous in the city - I am not sure there was much else he needed to tell me. 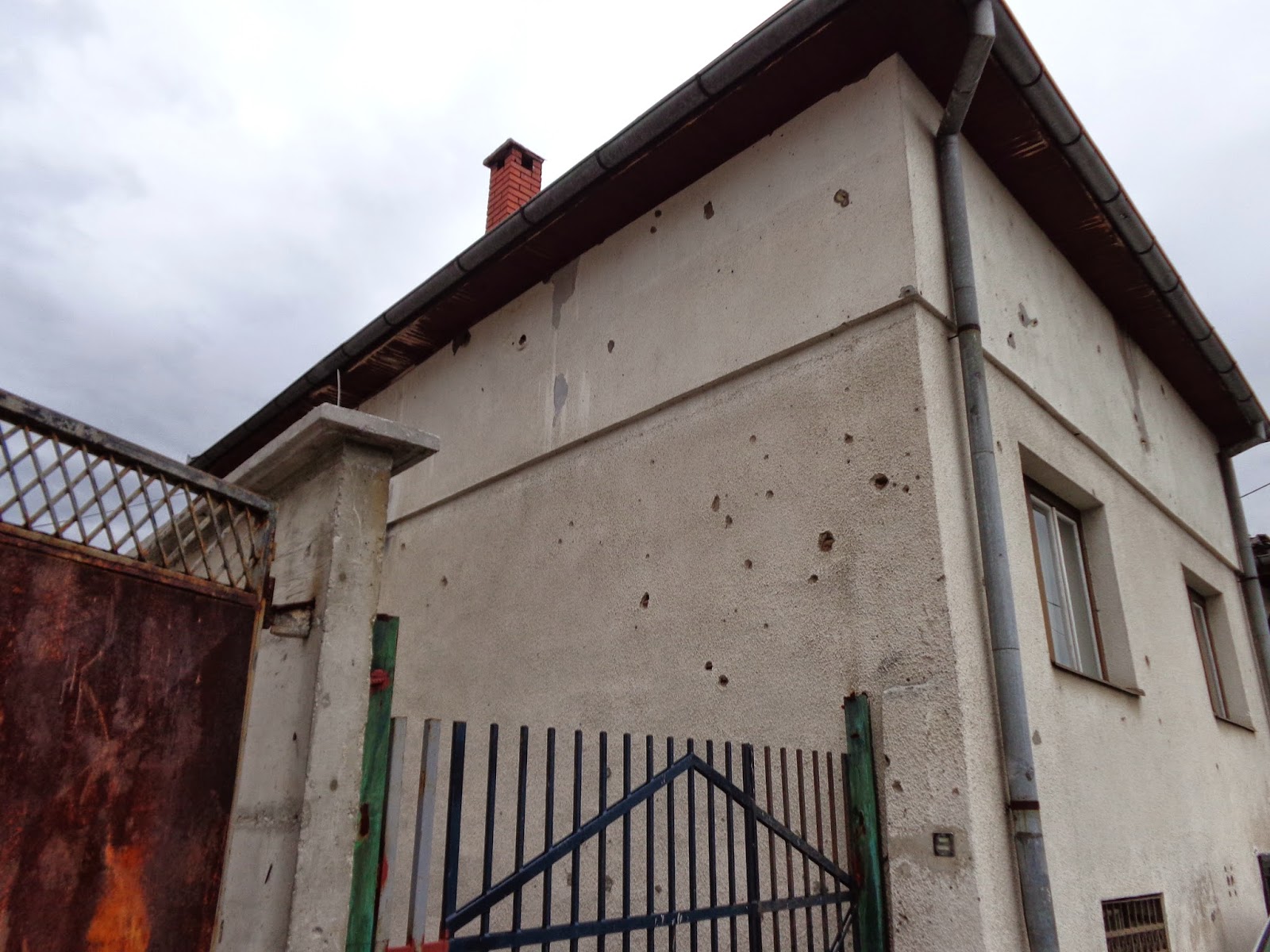 After so many periods of suffering, hopefully the people of this region will be able to live in peace and increasing tolerance and cooperatively work to address the need of all citizens, including those affected by Parkinson's.
-Mark
Posted by Marcus Cranston at 2:40 PM