The Stories of Athletes with Parkinson's Disease

With excitement about the upcoming Victory Summit in Las Vegas sponsored by the Davis Phinney Foundation and some leisure time around the holidays for reading - I thought it would be good to share thoughts about some of the books that I have read about athletes with Parkinson's and hopefully get comments about other books that people have read.

Shortly after I was diagnosed with Parkinson's disease, I read "Lucky Man" and "Always Looking Up" by Michael J. Fox.  I found reading these books, especially hearing about familiar emotions associated with experiencing the early symptoms of Parkinson's, to be particular helpful at that time.

After that I turned to the stories of my traditional idols - athletes.  The tales of athletes with Parkinson's symptoms that interfered with not only the physical activities of daily living, but also the activities of physical competition, gave me a framework to process thoughts about the potential impact of Parkinson's on my sporting hobbies.

I still remember the day that I was on the treadmill in a hotel gym in Fort Lauderdale and looked up at the tv to see a person with Parkinson's in an Oregon State hat (I'm a Beaver).  After watching the rest of the ESPN segment on Ben Petrick - I immediately ordered his book, "Forty Thousand to One".  This was the first book I read about an athlete with Parkinson's.  The fact that he grew up in Oregon, the same state where I attended college and medical school, added to my identification and appreciation of Petrick's story of struggles and successes in dealing with the challenges of Parkinson's Disease, which cut short his major league baseball career.

I hadn't owned a bike since childhood until I bought one to compete in my first triathlon a few years ago. I also knew little about professional cyclists, outside of a few Tour de France stars, Therefore, it was a random Amazon search that led me to read Davis Phinney's, "The Happiness of Pursuit". In addition to providing great insight into the cycling world, the story of Phinney's initial frustration with Parkinson's, followed by acceptance and ultimately dedication to help others was particularly inspiring. Now having the opportunity to attend the Victory Summit on Feb 8, 2015 in Las Vegas is particularly exciting.

My favorite spectator sport, and the subject of most of the sports books that I read, is soccer. Being a somewhat late arrival to the world of international soccer (football), I enjoy reading stories of the periods of soccer that I know little about. Having searched and found an old used copy of Ray Kennedy's story, "Ray of Hope" - this was the one book I read during my Run-the-World 4 Parkinson's Disease travels. I was rewarded with a very real story of a great athlete whose career was cut short at its peak by early-onset Parkinson's.  Unfortunately, this story lacks the feel-good ending of most books by "stars with diseases", as Kennedy's life after his playing days involves a series of tragedies.

My quest for stories about athletes with Parkinson's has led me to a couple other books that are now on my shelf waiting to be read.  "My Toughest Faceoff" covers the life of the NHL hockey player, Brent Peterson.  "John Walker - Champion" is the story of one the all-time great distance runner, John Walker, although I don't yet know whether it touches on his experience with Parkinson's later in life. 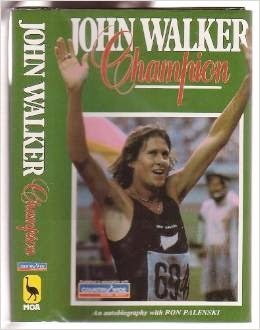 These stories have given me an opportunity to learn more about these great athletes and gain inspiration from their experiences. An obvious omission is the lack of a book on Mohammad Ali, as I am unaware of books that focus on his battle with Parkinson's.  I invite you to explore these books and would greatly appreciate comments on this blog about the books that you have read.

Posted by Marcus Cranston at 10:01 PM