This week my daughters returned to school and since I haven't written a post all summer, I feel the need to answer the infamous back-to-school writing prompt, "What did you do for summer vacation?" It turns out my activities this summer have been riddled with many of those "it's a small world", unlikely connections. 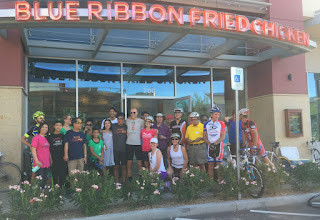 Two years ago, when I was planning Run-the-World 4 Parkinson's, I contacted Team Fox to find out how to use my project to raise money for the Michael J. Fox Foundation. Everyone I spoke with said, "You need to talk to Sam". Sam is Sam Fox, the Michael J Foundation's Outreach and Engagement Officer. Motivated by a mother with Parkinson's, in 2011 he ran from Canada to Mexico raising $300,000 for Parkinson's research. At that time, Sam was planning an ambitious challenge to climb the highest peak in each state, while biking much of the distance between mountains. Since then Tour de Fox has become a reality. A journey that began in June and will end in September, brought him to Las Vegas on August 16th...in between running across the Grand Canyon and cycling through Death Valley. In Vegas, Sam and a support crew of three, met up with about 20 locals to walk, run or bike and then eat breakfast at Blue Ribbon Fried Chicken.


Before I begin "the rest of the story", I want to urge everyone to read more about Tour de Fox  And for anyone who wants to donate to the Michael J. Fox Foundation, you can do so at our Event Page: Tour de Fox - Las Vegas 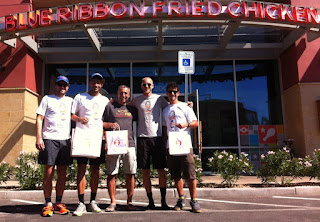 When we planned to host Tour de Fox in Las Vegas, we didn't have enough lead time to secure a permit for any of the local hiking sites. However, as luck would have it, we were put in touch with Ed Cecchi. Ed works with some non-profits organizations in Las Vegas and knew the owners of Blue Ribbon Fried Chicken. They were interested in working with Tour de Fox and their Downtown Summerlin location is a perfect place to access walking, running and biking routes. Plus the offer of free breakfast was too good to pass up. When we first met, Ed mentioned the New York City origins of the Blue Ribbon restaurants, an intriguing story that we would soon get to see first-hand.

I was apprehensive two years ago when I announced on-line that I had Parkinson's disease and now I have similar emotions as I make another disclosure...I am Eagleman. You may know that I'm a big soccer fan from some of my prior posts. My loyalties are to the Portland Timbers - the team from the city hosting the World Parkinson Congress 2016 - and the US National Team. What you probably didn't know is that over the past year that my wife and I have been running around Brazil and the United States dressed as Eagleman and Wonder Women, making friends, appearing on tv and in other media and taking thousands of photos with other fans. We even started to chronicle our travels on facebook (EaglemanandWonderWomen) and a blog (Eaglemanandwonderwoman.com). This summer we followed the US through the CONCACAF Gold Cup with games in five US cities. 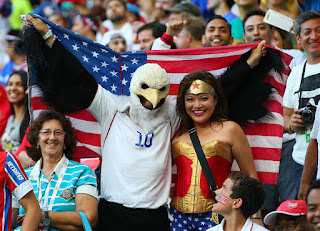 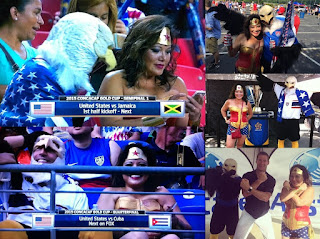 Our travels this summer included a stop in New York City to see friends we met at the World Cup in Brazil last summer. This stop gave us an opportunity to get an intimate look at the Blue Ribbon brand. 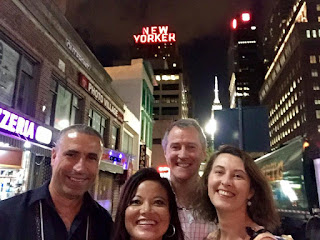 Late one night as were discussing where to eat, our friends mentioned "Blue Ribbon". I asked if they were talking about Blue Ribbon Chicken. After I explained the connection to Tour de Fox, our friends went on to explain the amazing story of how the Blue Ribbon Bakery Kitchen had restored a 135 year-old brick oven in basement of their old apartment building.  At that point there was no question where we had to go eat.  We ended up having an amazing late night dinner and got to see the famous Blue Ribbon Bakery Kitchen kitchen.
In case you are wondering just how good the fried chicken was, I will let my wife describe it. Not only is she a gorgeous Wonder Women, but she writes her own food blog: SE Asia Eats 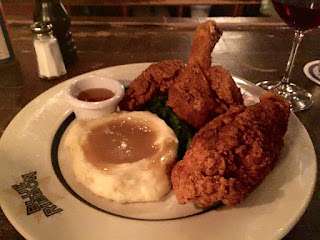 Lila: "The Blue Ribbon Restaurant is a New York City based restaurant group which was founded in 1992 by chefs and co-owners Bruce and Eric Bromberg. The bakery is in an old brownstone in Greenwich village which houses a 135 year old brick oven which produces different breads which are used in house and also sold to different restaurants around the city.
The restaurant has been on the top 10 lists numerous times on publications such as Zagat and New York Magazine. They have also been singled out multiple times in Gourmet and Food and Wine magazine. Both brothers have also been selected for James Beard Restauranteur awards several times.
So how was the chicken?  It truly was amazing. The coating was nicely flavored and crispy and the meat juicy. The mashed potatoes with the accompanying gravy were a sheer delight and you could not have found a happier diner than me that night in the village."

If this story hasn't already convinced you that you have to try one the Blue Ribbon restaurants, let me introduce you to the staff at the Downtown Summerlin Blue Ribbon Fried Chicken location. These guys were the best hosts imaginable as they cooked up a great breakfast to fuel the Tour de Fox team. You can click here to find out more about: Blue Ribbon Restaurants


Posted by Marcus Cranston at 7:19 PM