When I made a personal commitment to take on a travel/exercise challenge for Parkinson’s awareness each year, I imagined selecting sites based on my goal of visiting all the world’s sovereign nations and I envisioned the exercise activities would be a variety of running tasks.

This summer when I looked at my world map – the natural destination for my next journey seemed to be Africa.  In addition, I had thoughts of incorporating an element of speed into my running, rather than solely focusing on endurance. However, my wife’s legitimate concern of having two family members in Africa for extended periods this year (my daughter is currently studying in Tanzania) and a knee injury that made my immediate running future uncertain, led me to look for a plan B. Thus was born...“Swim-the-Pacific 4 Parkinson’s Disease”. The plan for this venture combines my personal travel/exercise goals with my desire to contribute to Parkinson’s awareness, especially in areas where those affected by Parkinson’s currently have the least opportunities for support. 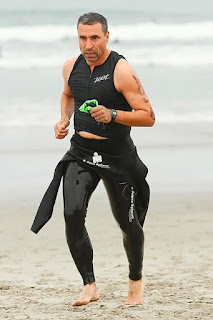 The swimming challenge is the most straight forward aspect of the plan.  I will attempt to swim 1 mile in each country. A few years ago when a knee injury forced me to limit my running, I took up swimming to allow me to compete in triathlons.  Although, I’m far from mastering the sport, I’ve developed a slow, steady stoke and I’ve already started training to be able to complete a 1 mile ocean swim. I’ve also begun the task of identifying locals at each stop to guide me to safe swimming spots in order to avoid headlines like…“Parkinson’s advocate attacked by shark” or “Man with Parkinson who spent 4 years on deserted island after being swept away by current during Parkinson’s awareness swim, set to attend World Parkinson Congress 2020”. 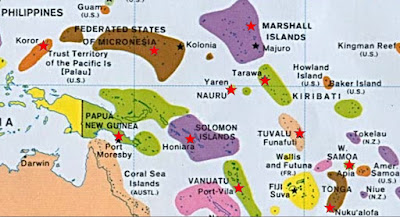 After Africa - where I have only been to 9 of 54 nations - Oceania is the region with the most countries that I have left to visit. The 11 Pacific island nations on my “yet-to-be-seen list” span a huge geographic area from the Marshall Islands in the North to Tonga in the South to Samoa in the East and Palau in the West. Airline routes here are largely designed to reach a single island and definitely not set up for “island hopping”. Therefore, my most difficult task will likely be finding an itinerary to reach all the islands in a reasonable amount of time. I will be starting with the 2 easiest to reach islands. United Airlines, and before the merger Continental, has a long history of flying from Hawaii to Guam with multiple stops in the Marshall Islands and the Federated States of Micronesia. I will be taking advantage of this route, making stops to swim in Pohnpei, and Kwajalein on Nov 30 and Dec 1, respectively. This is part of a larger trip in which I’ll spend 1 week in “the world’s most isolated nation” for my 50th birthday present to myself and a week with my wife and younger daughter in Japan and Hawaii for Thanksgiving. The remaining 9 Pacific island nations I hope to visit during the next couple years.

As I’ve had the opportunity to travel and observe those affected by Parkinson’s around the world over the past 2 years, I’ve come to realize that my best role as a voice for Parkinson’s awareness is to draw attention to those without access to support due primarily to the part of world in which they live. Therefore, it seems fitting that this journey to raising Parkinson’s awareness will have a backdrop of isolation, as the Pacific island nations are some of the world’s most difficult to reach countries.

In the coming weeks and months, I’ll be writing about my preparations and travels and look forward to sharing this journey with all.
-Mark
Posted by Marcus Cranston at 8:56 PM