Driving Across Dominica...in search of a soccer game

This morning I woke to find that my rental car battery was dead. I left the car in Roseau, took an hour-plus taxi ride across the island to the airport and still ended up missing my flight and radio interview.  On the bright side I had plenty of time to put up a post while waiting for the next flight from Dominica to Antigua. 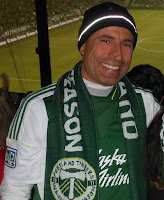 My wife has long accused me of planning all our travel around soccer games.  This is not actually true...sometimes I plan the travel first and then look for the soccer later.  That was the case with Run-the-Caribbean. After I selected the countries that I planned to run across - I became aware that regional qualifying for the 2018 World Cup would occur while I was in the islands. When I scanned the list of fixtures, I found the perfect one - Canada vs. Dominica.  This was ideal because Dominica didn't have a reasonable running route across the island, it had a number of natural sites that I wanted to visit and Canada featured a player from my favorite club, Portland Timbers.  So my schedule was set to ensure I would be in Roseau on June 11th. 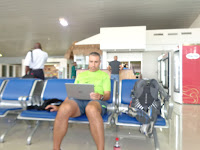 My travel from St. Kitts, started with another ridiculous exchange with airport security. I arrived at the modern, comfortable St. Kitts airport only an hour and half before departure, but was happy to find that I was the only person in the check-in line for Liat Airlines, the only person in line to have their boarding documents reviewed, the only person in line for emigration, and most importantly - the only person in the security line. As the four security staff members stood up from their chairs I placed my laptop and cellphone in a bin and then asked if they wanted me to take out liquids. When the answer was "yes", I place my bag containing 3 packets of laundry soap, a nearly empty sunscreen bottle and a small shaving cream can in a second bin. That's when the security staff asked me if I had a smaller bag. I was puzzled. She gestured to a "smaller bag" with some items inside hanging from the wall, and stated, "You should use a quart bag.  You have a gallon bag".  Thinking this was a suggestion, I thanked her for the information.  She then asked me, "So do you want to go back out and see if you can get a bag?"  Now in most places in the world this strict enforcement of "the rules" meant one of two things. Either we were about to have a stand-off to see if I would flinch and pay a bribe or there was a near-by shop/stand in which the owner sells nothing but quart-sized zip-lock bags at an astronomical mark-up. In this case, the official seemed not to be looking to profit, but just requiring strict adherence with "the rules". I surveyed the situation. The cost of the items in my bag was approximately $4US. Even if I could find a quart bag, I didn't know what the cost would be. Without laundry soap, I could wash my clothes with shampoo (which is what I usually do anyway), sunscreen could be purchased anywhere in the Caribbean, without shaving cream I would have one more excuse for not shaving, and getting rid of the bag of liquids would simplify procedures during my connection in Antigua.  Realizing the clear benefits, I let the security staff know - "thanks, I'll just leave this stuff for you".  Thus allowing me to clear security and allowing the staff to sit down and plan their next "shake-down". 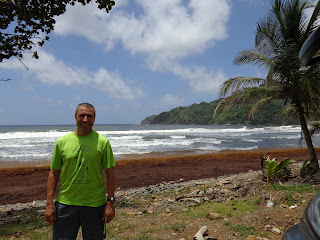 Once in Dominica, it was immediately evident why this island is known as the undeveloped, natural gem of the Caribbean.  I was only a few miles down the road in my rental car, when I felt the need to pull over and snap a few pictures of a beautiful, deserted beach.  After driving across the island, I had one place to visit before checking into the hotel. Trafalgar Falls was on all the lists of top sites in Dominica and it was definitely worth the trip. 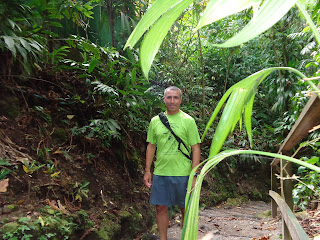 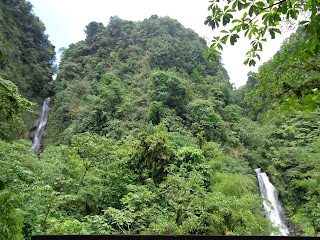 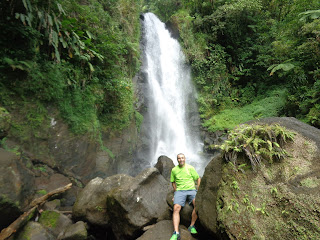 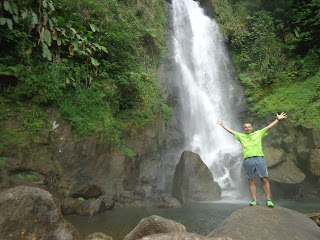 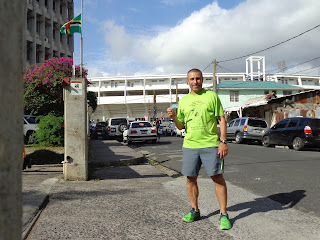 When I returned to Roseau, I had two things to do. First, I walked over to Windsor Park to buy a ticket for the game. When I asked the ticket seller if there was a section for the away fans, he chuckled and informed me, "you sit wherever you want". In response to my inquiry about ticket prices, he simply stated "very cheap".  He was correct. For $15 EC (about $6 US), I had a ticket for any seat in the stadium. Of note, the stadium itself was built as gift from the People's Republic of China - evidence of the ongoing rivalry between China and Taiwan for UN votes that can be seen in many Caribbean island nations.  With my ticket in hand I only needed one more thing, a red shirt to identify myself as a Canadian fan that night. This turned out to be good investment. As soon as I passed though the ticket stiles I was noticed by the lone person at the game in a Canadian jersey. Dan from Vancouver recruited myself, 2 Germans and 3 Dominicans to form the Canadian fan section. Canada won 2-0 and it was thoroughly enjoyable evening that end at the Canadian team's hotel listening to stories that ranged from Canadian soccer fan exploits to the adventures of a physician during the Rhodesian (Zimbabwe) civil war...and even included a brief discussion with Will Johnston about living in Portland and playing for the Timbers. 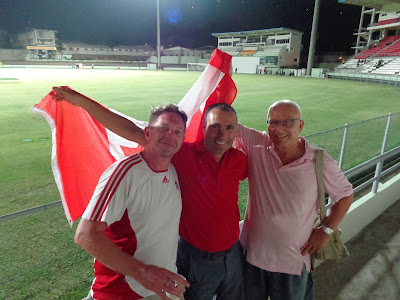 Posted by Marcus Cranston at 9:56 AM