Running Across Grenada...in search of food

My brief stop  in Grenada found me wandering historic St. Georges on a sleepy weekend, struggling to run-hike 15 miles over the island's central mountain range and enjoying the quiet, beautiful beach near my hotel...and hunting for food. Here are some the images from my time in Grenada...
When I left the States for this trip, my blogging plan was to limit myself to posting a series of photos from each island.  Tonight I finished uploading photos, did a telephone interview for a local radio show and then left to get dinner with plans to publish the post while eating. When the story of my hunt for food became more ridiculous, I couldn't help but try to tell it


I landed in Grenada at 1 PM on Saturday, having left Las Vegas at 10 PM the night before.  Having only eaten a bag of M&M en route - I was a bit hungry on arrival.  My first thought was to grab something inside the airport.  When I cleared immigration and customs (the customs office hitting me up with usual "is that all of your luggage" question) - I found this was not an option...as there was nothing inside the airport. Outside there were a few stalls across the street, but at a distance glance they appeared to just have drinks and snacks.  So I decided I'd grab something quick by the hotel and then go into St. Georges to find a place to have a meal and watch the Championship League Final.  After walking the half mile from the airport to the hotel, it was evident that there was nothing near the hotel and I'd have to wait to eat in St. Georges. 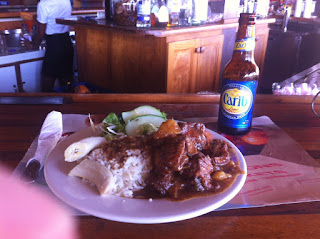 After the typical white-knuckled minivan ride - known simply as a bus ride to locals - I was in the center of St. Georges.  Not a single restaurant was in sight.  I decided on a walking route straight up the hill to the Cathedral of the Immaculate Conception.  Even if I didn't find food, I'd be able to check one of the local sites off my list.  An hour later I was rounding the harbor area, known as Carenage, in the direction of a place that I had seen from my hilltop vantage point called the Tropicana Inn .  I had figured I'd find a bar somewhere along the way that would be showing the game.  No such luck, and when I reached the Tropicana Inn, it looked sure to be closed.  However, there was a young girl in the small bar area cleaning dishes and she let me know they were open, but the menu was limited to the "specials" on the chalkboard in the corner.  Obviously not the daily specials, because the writing appeared to have been made well over a month ago.  I chose the stewed turkey and was rewarded with a really good meal. 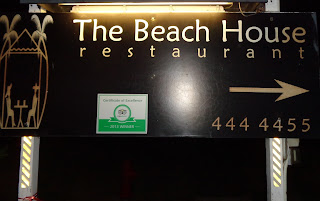 Later that afternoon, the hotel staff let me know that there was a highly recommended restaurant just around the corner from the hotel, so I planned to go there for dinner. When I saw the sign advertising the restaurant, I thought this was just the place for me (check out the phone number).  But once again I was wrong. The Beach House was only for those attending a private function that night. 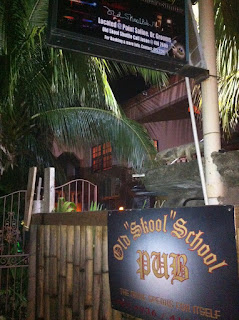 There was another option.  A couple hundred yards early I had passed the Old Skool Pub, whose motto was "the name says everything". The problems with this option were twofold.  One, it looked closed. Two, the decor and spelling of school as S-K-O-O-L, made me worry that the motto may hold a secret of something a bit sinister.  But at that point my stomach was much stronger than my brain.
Inside the place, the couple guys playing pool and the one guy who occasionally banged on the bongo, suggested Carib beer may not have been the only substance influencing the clientele that evening. The extremely friendly bartender and the extremely friendly waitress conferenced when I asked if they served food. She went back to the kitchen and returned to let  me know she could make BBQ chicken and fries for me. I happily thanked her and she returned awhile later with the two  biggest drumsticks I have ever seen in my life. It made me wonder if the delay in the kitchen earlier was due to her trying to figure out if she had BBQ chicken, BBQ turkey or BBQ some-other-bird-meat to offer me.  In the end, I had another great meal.
I was a little concerned about what I would do for food prior to my run on Sunday AM.  There wasn't a convenience store near the hotel, so decided to pack my CliffBar Shot Blocks and hope to get some carbs when the taxi dropped me off in Grenville on the other side of the island.  Without a restaurant or bakery insight, I settled for a convenience store stop - eating a Snickers bar and packing some trail mix for later.  Although the route was grueling, I made it across the island on the Shot Blocks alone and once in St. Georges, I resumed the search for food.  I made the error of passing up a KFC and a Subway, in hopes of a better option that never materialized. I finally ended up in a small grocery store with plans to go to the Beach House for an early dinner.  The chocolate milk, guava juice, Gatorade, crackers and leftover trail mix got me through the afternoon. 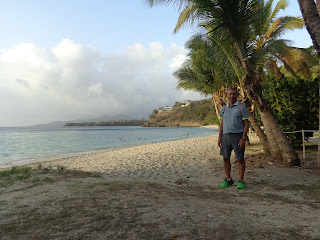 I was a little alarmed when I approached the Beach House and there were no cars in the parking lot, but as passed by to take a photo on the beach I could see that the doors to the restaurant were open.  When came back and entered the Beach House I was happy to see a man sitting at a  table drinking a beer.  Not seeing anyone else around, I asked him if the place was open.  He delivered the terrible news that they were closed on Sundays.  This was especially concerning, because I have walked past the Old Skool Pub and there was a paddle lock on the gate there.
The was again, one more potential option.  On my short walk from the hotel I had passed, Grooms Beach Villas.  In the dark the night before I had not noticed this place, but with music blaring and people scream - it was impossible to miss this day.  After weaving my way through the dancing, and obviously quite drunk crowd around the pool and bar, I was able to find out from the wait staff that they would be serving dinner in the restaurant later that evening, beginning at 7:00.   As I walked back to the hotel I was a bit worried when I heard the DJ announce to a moaning crowd that they would have to leave now, because there was another party booked for 7:00 that night.  Would my dinner plans be undone by a private party again?
Around 7:30, I headed back to Grooms Beach.  I could hear the live band as soon as I left my hotel and pessimistically assumed I would be turn away on arrival, due to the restaurant's private function.  However, the wait staff assured me that the restaurant was open and seated me. A waitress quickly returned to let me know something about filming a television ad.  I didn't understand at first and I thought the restaurant was closed for the filming. But the staff just wanted to know if I was okay with the filming. As far as I was concerned they could put on a circus around me, as long as I could finally get some food.  I was relieve that I would be having a nice, normal meal this evening.  That's when the waitress returned with the menu...and cameraman in tow.  The camera was rolling and I quickly realized that as the only foreigner present, I had been cast as the leading man for the restaurant ad. It was a bit amusing and figured my acting work was complete after they got their obligatory video shot of a tourist.  But when the waitress came back to take my order...and when she brought my drink...and when she finally brought my linguine with shrimp - this was all elaborately captured on film.  In the end, the food was amazing and I if I had another night in Grenada I would have gone back for seconds.
As the band finished at 9:30 and thanked the small crowd remaining, they made an announcement. They would be flying back to England in the morning, but before that they had one more gig to play in Grenada.  In the next hour, they would be moving over to the Old Skool Pub and once there would play "til".  It was tempting, but I'd had enough excitement for one day - and definitely wasn't in need of another travel story.
Posted by Marcus Cranston at 8:21 AM