As I stated in my last post, my plan for blogging this trip was to post a series on photos from each island...I had not planned for those photos to be limited to selfies.  In St. Vincent, that's what happened - here are the images and the explanation.
Through my travels, I've created a system for loading up my backpack.  Given the running distances involved on this trip, I've come up with a system for packing for each run, too. My camelback is filled with ice and then water. It has a small pocket, which I use for emergency items I don't expect need frequently while I run - phone, room key and wet wipes.  Then I use a running belt for other items - camera, snacks, money, credit card, id, and map. This gives me a compact, comfortable way to carry everything I need while running.
My run in St. Vincent was planned for the evening.  In addition to the usual heat, mountain climbing and sore muscles, I was a bit concerned about finding transportation to my starting point on the other side of the island.  St. Vincent has two basic bus routes - the Windward Highway and the Leeward Highway. I just needed to find a Windward Highway bus and make sure it dropped me off at the Calder Road intersection. The hotel staff gave me basic directions to the bus station and it actually sounded quite simple.
I walked the half mile to where I expected to find the bus station, only to see minivans zooming in all directions, blaring music, honking, and shouting at potential customers. I knew that minivans would be the "buses", but was concerned that there was no specific "bus station". The minivans appeared to be stopping at a number of places over a few block. There were a few other complicating factors. One, none of the minivans with were marked with directions. Second, it was now rush hour and there were a couple hundred people standing around waiting for a "bus" and all that passed seemed to be full.
I waited a few minutes in the area with the largest crowd to try to pick up the proper procedures by observing the locals.  But there were no lines and no clear reason why certain people piled into certain vans.  I finally asked a lady, who kindly let me know that the buses to Calder Road stopped a couple blocks away, by the fish market.  I moved to the area behind the fish market and after asking people in three separate lines whether this stop was for Calder Road and then being directed to another area stop in the large parking lot - I finally found the right stop.  The driver of the first van in line pointed me to the van behind him.  Unfortunately, that van was full. But when the doorman shouted, "Calder Road?" and I nodded - the door flung open, he jumped out and motioned for me to get into the already full van. 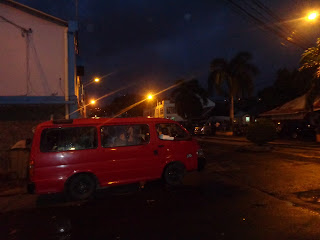 In case you haven't had the pleasure of riding a minvan, as public transportation, let me outline the system. The driver is typically a young male. Imagine a 25 year-old guy with the belief that with all his driving experience, he should really be on the Formula 1 circuit - and he is out to prove it.  The doorman sits in the second row on the opposite side of the driver. He is a true multi-tasker. His jobs include: advertising, notify the driver of pick-ups and drop-offs, manning the door and collect fares. The van itself is a standard minivan with four rows of seats. However, the from row is fitted with a seat between the driver and passenger seats, the back row has a full bench across, and the second and third rows are fitted with jump seats (a seat that folds up to allow passengers to reach the rows behind, but then prevents passengers behind from exiting in case of an emergency when the seat is down and occupied).  All-in-all the modifications increase the seating capacity from a standard, tightly fit 12, to an extremely tightly fit 15.


When the van to Calder Road arrived, I was pretty certain all seats were taken, but a couple people jumped out to raise their jump seats and reveal that there were only 3 in the third row, so I was very fortunate to get the last seat on this bus.  I was surprised when the van stopped again a few blocks away to allow 2 more people to get on, but no one else flinched and the 2 smallest children simply climbed on to the laps of their mother and older sister.  At this point I decided to count...we had 20 people total on board. Then as if trying to set a new Guinness World Record, the van stopped for one more passenger. To make room the doorman gave up his jump seat to the new passenger. He then "sat" horizontally between the first and second row with his backside hanging out the window - the classic "mooning" position.
At that point I thought I should get a photo, because words just can't fully describe the situation.  That's when panic set in.  I realized I didn't have my running belt.  At least, I didn't think I had my running belt.  I was wedged into the van and couldn't get my hand around to check.  When I was able to "adjust", my fear was confirmed.  No money to pay the driver, no snacks to sustain my energy during the run, no map to guide me back and no camera to capture my run and the landscape.  However, after the initial wave of panic passed, I remembered to two critical facts.  First, I had put 5 East Caribbean dollars in my shorts pocket, so I wouldn't have to dig into my running belt while in a crowd to get out my bus fare.  And thanks to my packing "system", I had put my phone in the pocket on my camelback - and thus my photos from my run across St. Vincent were destined to be a series of selfies. 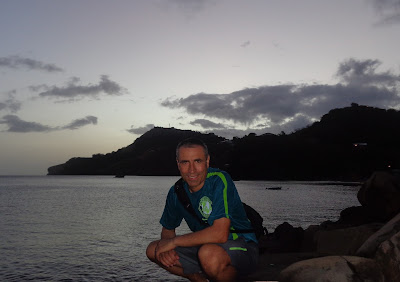 Posted by Marcus Cranston at 7:34 PM