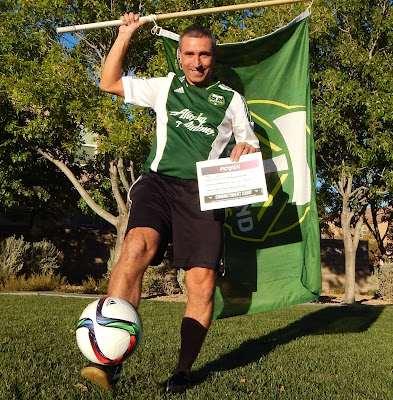 As I join the Parkinson Power Through Project as a diary writer, I’d like to take a minute to introduce myself to those I’ve yet to meet and reintroduce myself to the many wonderful people that I have met through my journeys to raise Parkinson’s awareness. I’d also like to introduce everyone to the Parkinson Power Through Project. I invite everyone to participate in this wonderful event and also follow me as I take on the challenge with a unique twist.

I grew up in a small Montana town, attended college and medical school in Oregon, and then spent over 21 years as an Air Force physician. In 2010, at the age of 44, I was diagnosed with Parkinson’s Disease. The disease that threatened to take away my two favorite hobbies, sports and travel, has given me a cause toward which to apply my experience and interest in medicine and humanitarian relief.

In April 2014, I completed an individual challenge to raise Parkinson’s awareness and research funding by running 4 miles in 44 different countries in 4 weeks – “Run-the-World 4 Parkinson Disease”.  After circling the globe, meeting Presidents, running with Olympic athletes and interacting with so many people dedicated to helping those with Parkinson’s, I’ve been inspired to continue efforts to further Parkinson’s awareness.

In 2015, I took on another challenge, “Run-the-Caribbean 4 Parkinson’s Disease” – running across 5 Caribbean islands in 5 days. My current exercise/travel endeavor is titled, “Swim-the-Pacific 4 Parkinson’s Disease”. Beginning in November 2015, I plan to complete one mile swims in 11 Pacific island nations. Having set a goal to visit every country in the world and by choosing some of the most isolated countries in the world for this challenge, I hope to bring attention to those with Parkinson’s who don’t have access to the needed medical care and support systems.

I see my participation in Power Through Project as a natural extension of my current awareness activities. Hopefully, in a small way I will be able to add a inspiration and motivation to help others complete the PTP challenge to accumulate 100 hours of physical activity, and cover 3,000 virtual miles from Montreal, Canada, home of the WPC 2013, to Portland, Oregon, USA, home of the WPC 2016. Having attended medical school in Portland and having my daughter currently in college there, I could agree more with the PTP statement: “What better finish line to a life-changing project, than the 4th World Parkinson Congress held in Portland, Oregon, USA.”

In order to add my own brand to the challenge, I’ve devised a special, expanded Power Through Project venture. As Team 444, my challenge (and that of anyone else that wishes to attempt it) will be to complete a virtual journey between all 4 World Parkinson Congress host cities - using the mileage conversion and timeline for the Power Through Project: 1 hour exercise = 30 miles from January 1, 2016 to September 20, 2016. The virtual segments will be as follows:

I invite everyone to sign up now for the Parkinson Power Through Project by going to the website:  www.powerthroughproject.org.  You will be able to find more about the Team 444 challenge and follow my progress on my blog: www.444parkinsonstraveler.org and Facebook page: www.facebook.com/444ParkinsonsTraveler

Posted by Marcus Cranston at 7:18 PM