Armenia and Georgia - Full of Surprises

I got into Yerevan, Armenia before 4 AM.  My original plan was to hang out in the airport until my city tour started in the morning, but being so tired I decided to try to check into the hotel early.  I fought my way through the usual unofficial taxi drivers with my strategy to take the first taxi what looks like an official taxi line. The problem was that the first taxi, was also the only taxi in the line and there was no driver.  When the taxi drivers seemed to be saying that the "office" was in the parking structure across the street, I was skeptical,  but followed one guy to see his taxi.  Before entering the garage his car was visible, and unless the taxi standard with extremely low in Armenia, it was not an official. Much to his agitation, I turned back to toward the official taxi, where a young taxi driver was now standing by the lone car.

On the way to the hotel the driver let me know that this was his last day driving taxi and I was his last customer.  Unfortunately for him, I turned out to be a difficult customer.  He stopped four times to ask directions to the "14th Floor Hotel".  Once we finally found it - the hotel entrance was located in a very sketchy back alley. 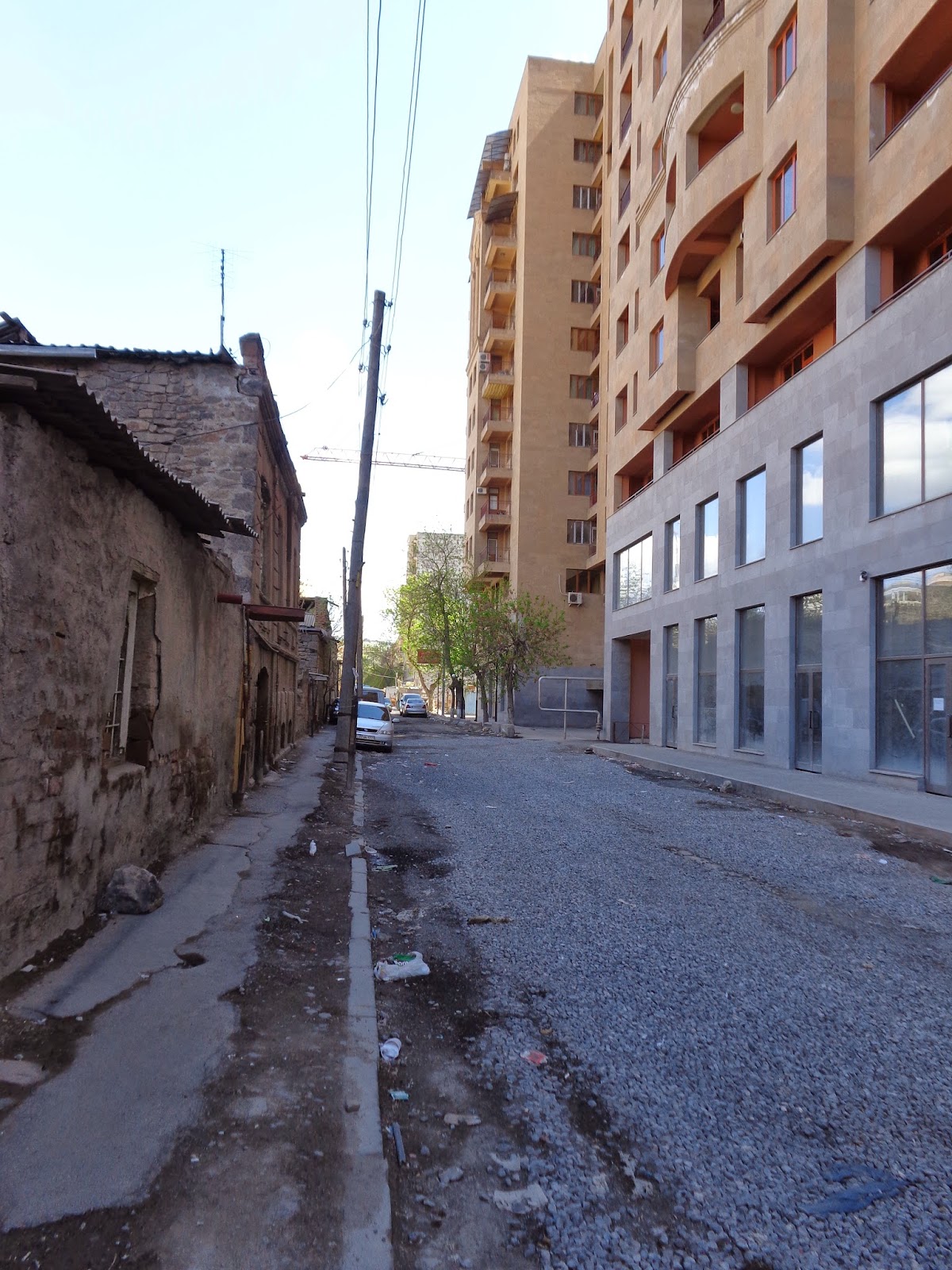 When I got to the elevator, it had only 2 buttons "2"  and "14".  I am not sure what the first 13 floors are used for, but surprisingly the 14th is a very nice hotel.  I immediately felt asleep and when I woke up in a couple hours, I step outside my door to the rooftop terrace and had my next surprise - I felt so close to Mt. Ararat that I half expected to discover the Ark while lounging outside my hotel room. 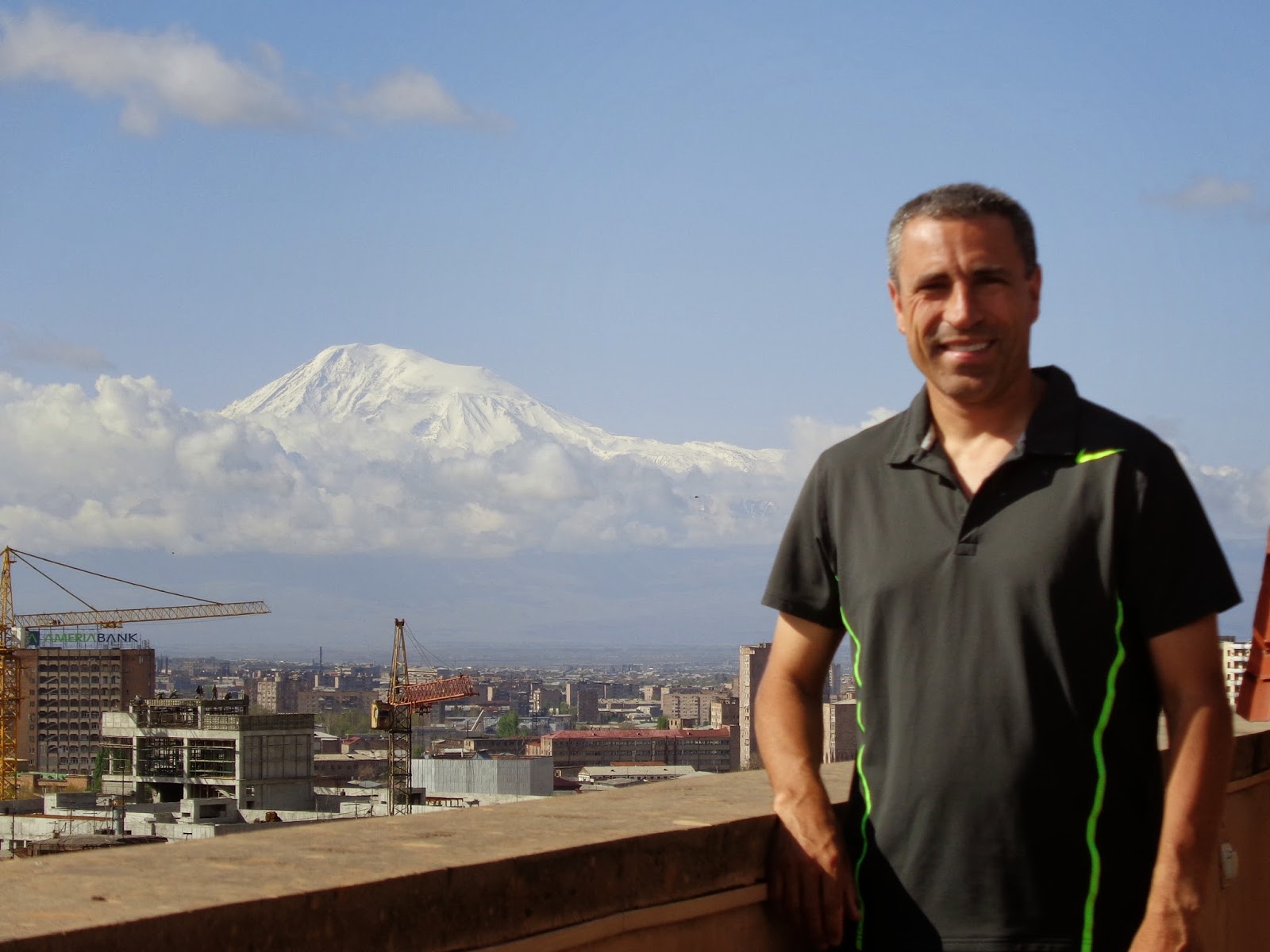 Given that I had a full day in Yerevan and have an interest in the old USSR, I had booked the Soviet-era Armenia city tour through Envoy Hostel.  A couple young girls from Finland and I were the only ones scheduled for time travel this day and it turned out to be one of my favorite tours ever. Trying to imagine life 20-30 years ago in Yerevan was fascinating. 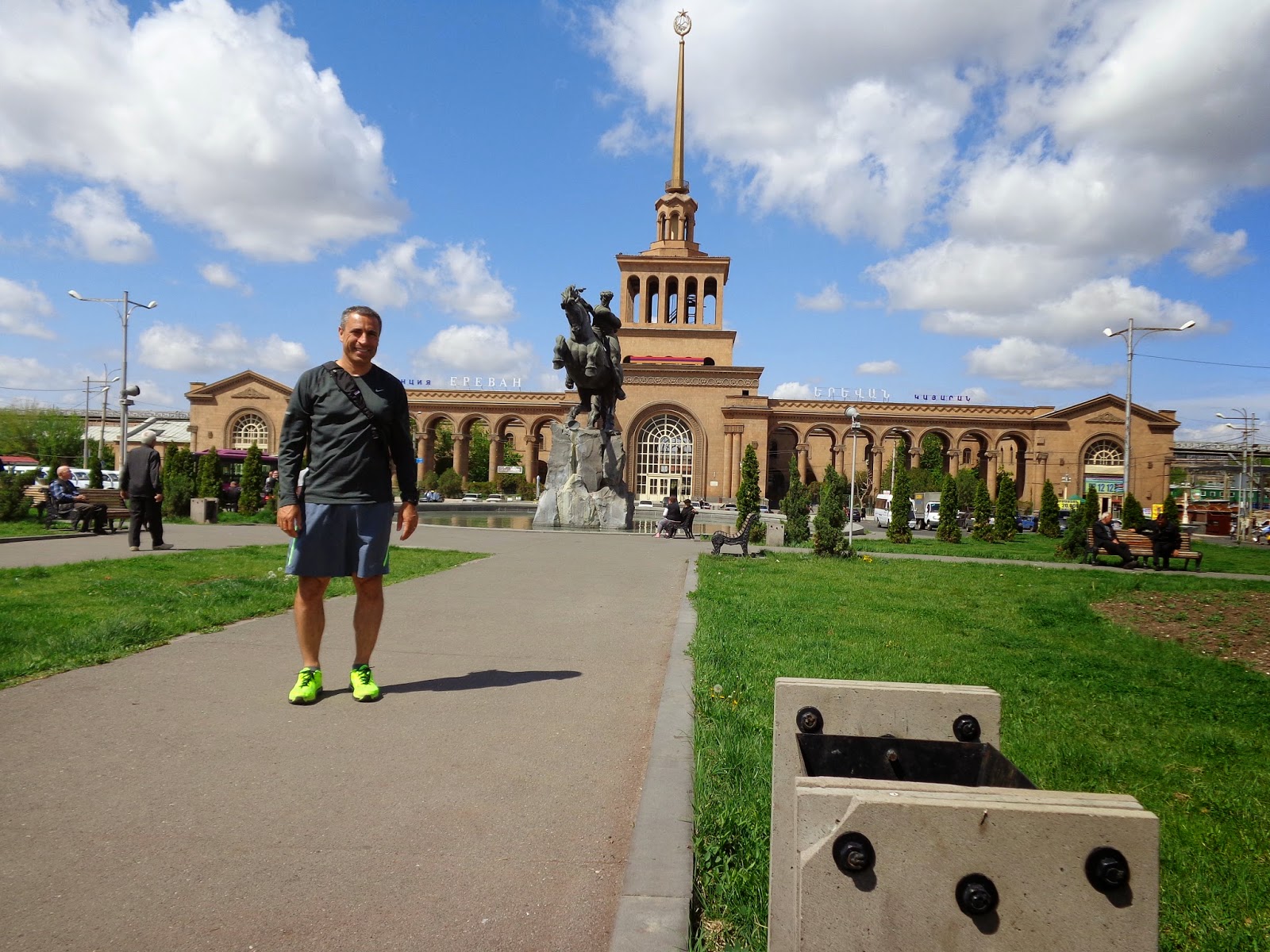 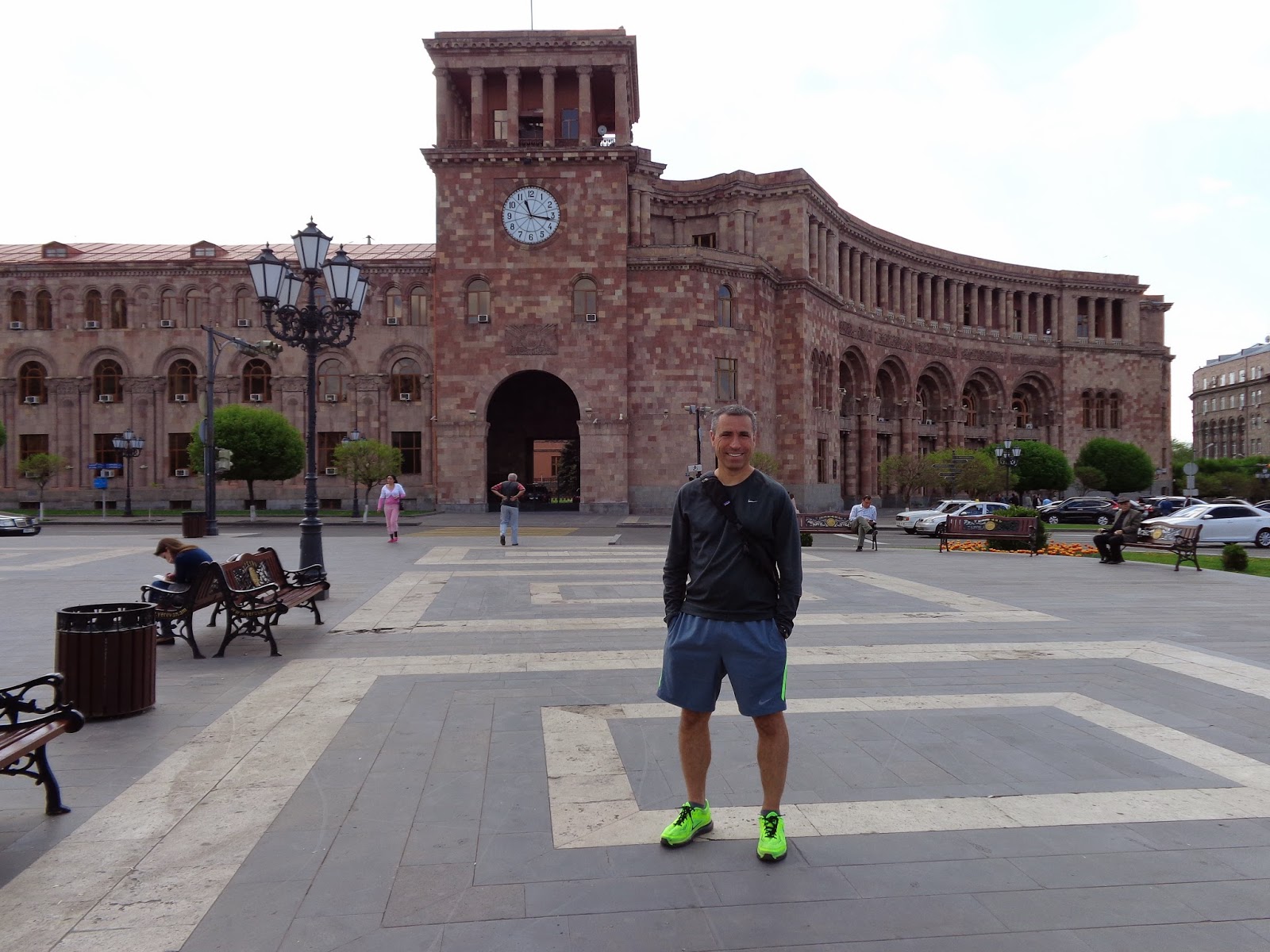 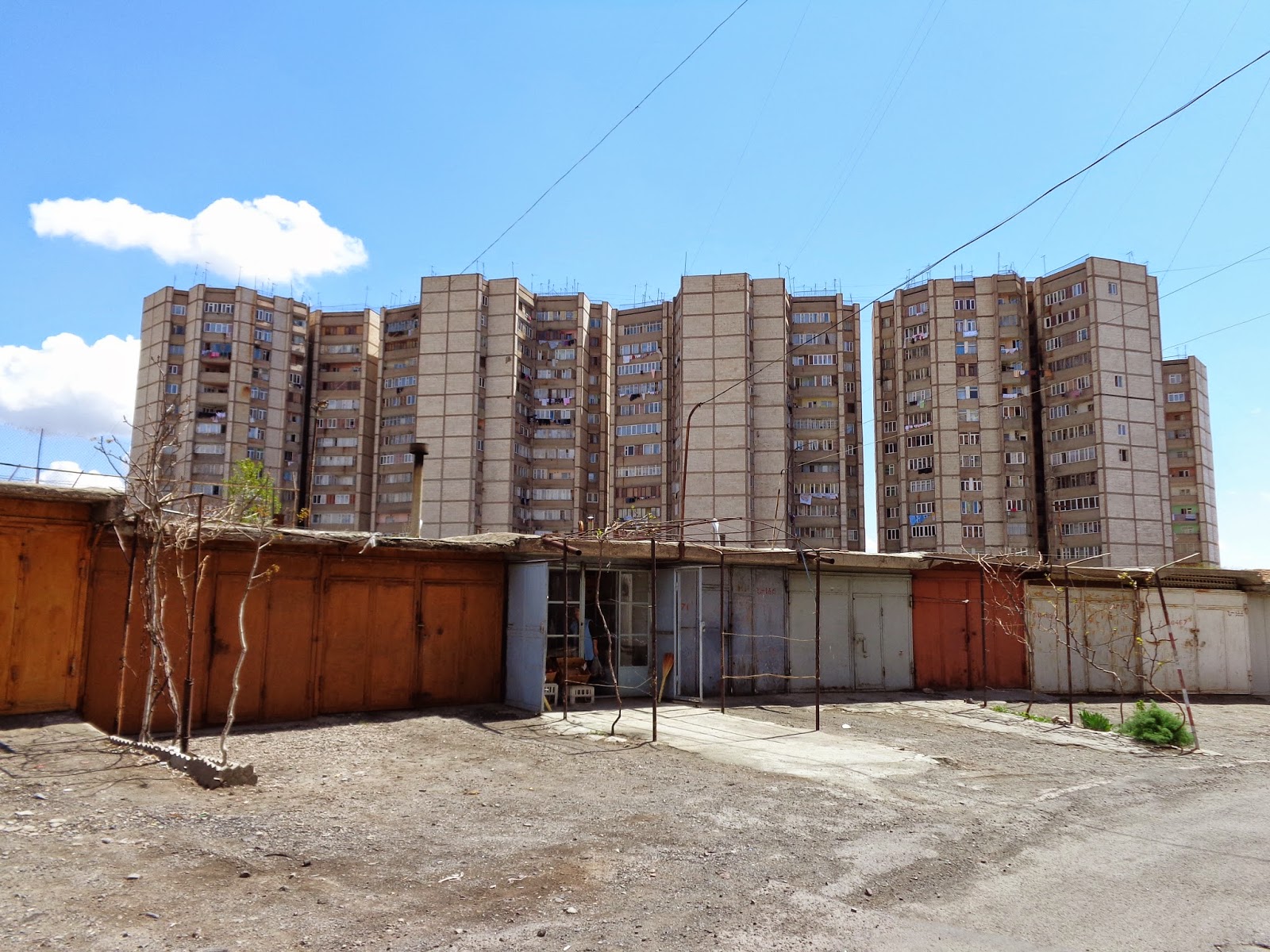 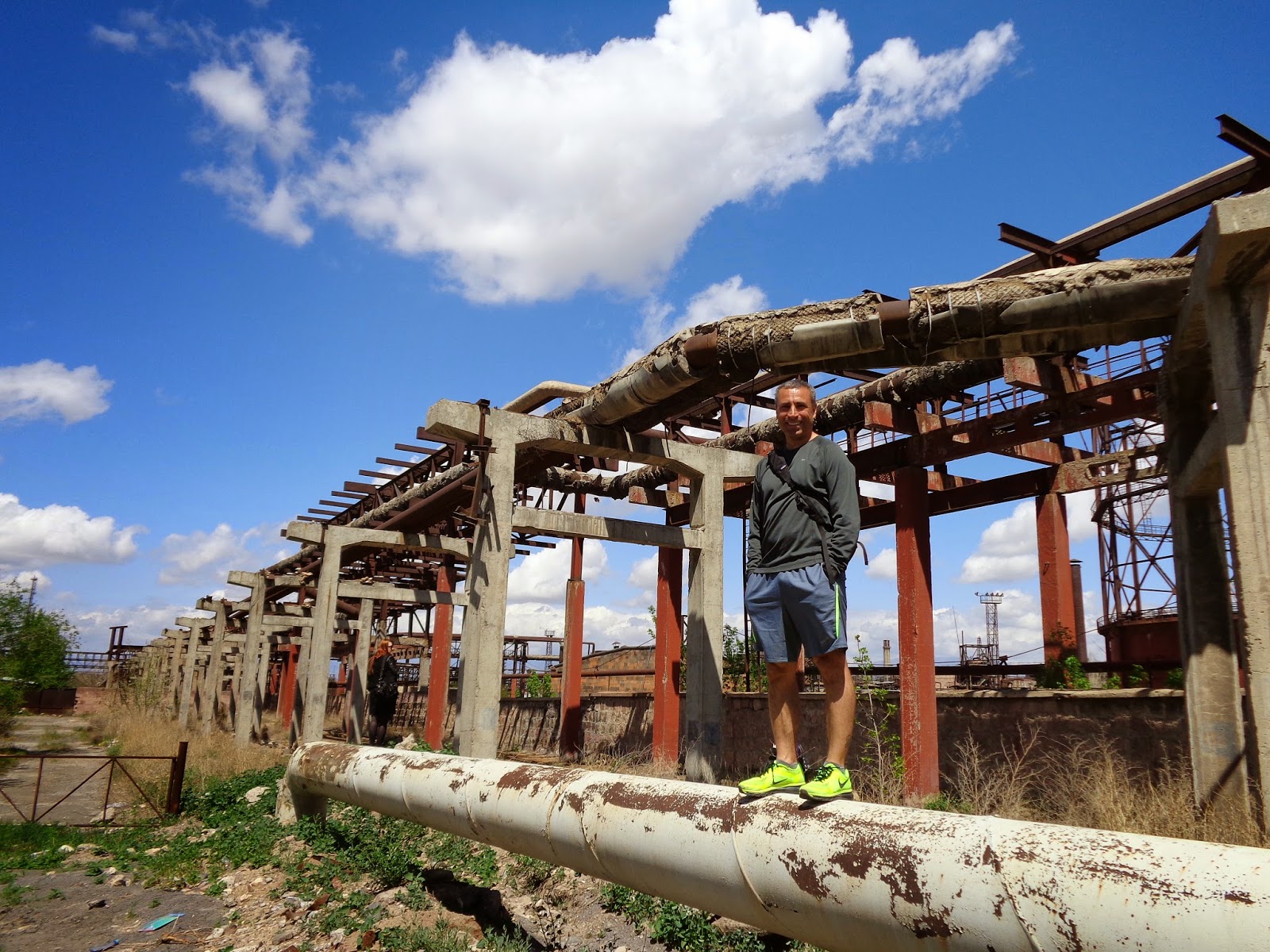 We traveled a Soviet-era van and our tour guide was very entertaining, particularly her long list of Soviet jokes such as:
President Reagan invited President Gorbachev to a $2M dinner at the White House and Gorbachev was so impressed he asked, "How do you afford this?"  Reagan said, "Come look out this window.  Do you see that building?"  Gorbachev replied "Yes."  Reagan then stated, "Well it was planned to cost $10M, but we built it for $8M and that is how we can afford this dinner".  A year later Gorbachev invited Reagan to a dinner that cost $3M.  Reagan then asked Gorbachev, "How do you afford this?"  Gorbachev said " Come look at out the window.  Do you see the bridge?"  Reagan replied, "No."  Gorbachev then stated, "That is how we afford this dinner." 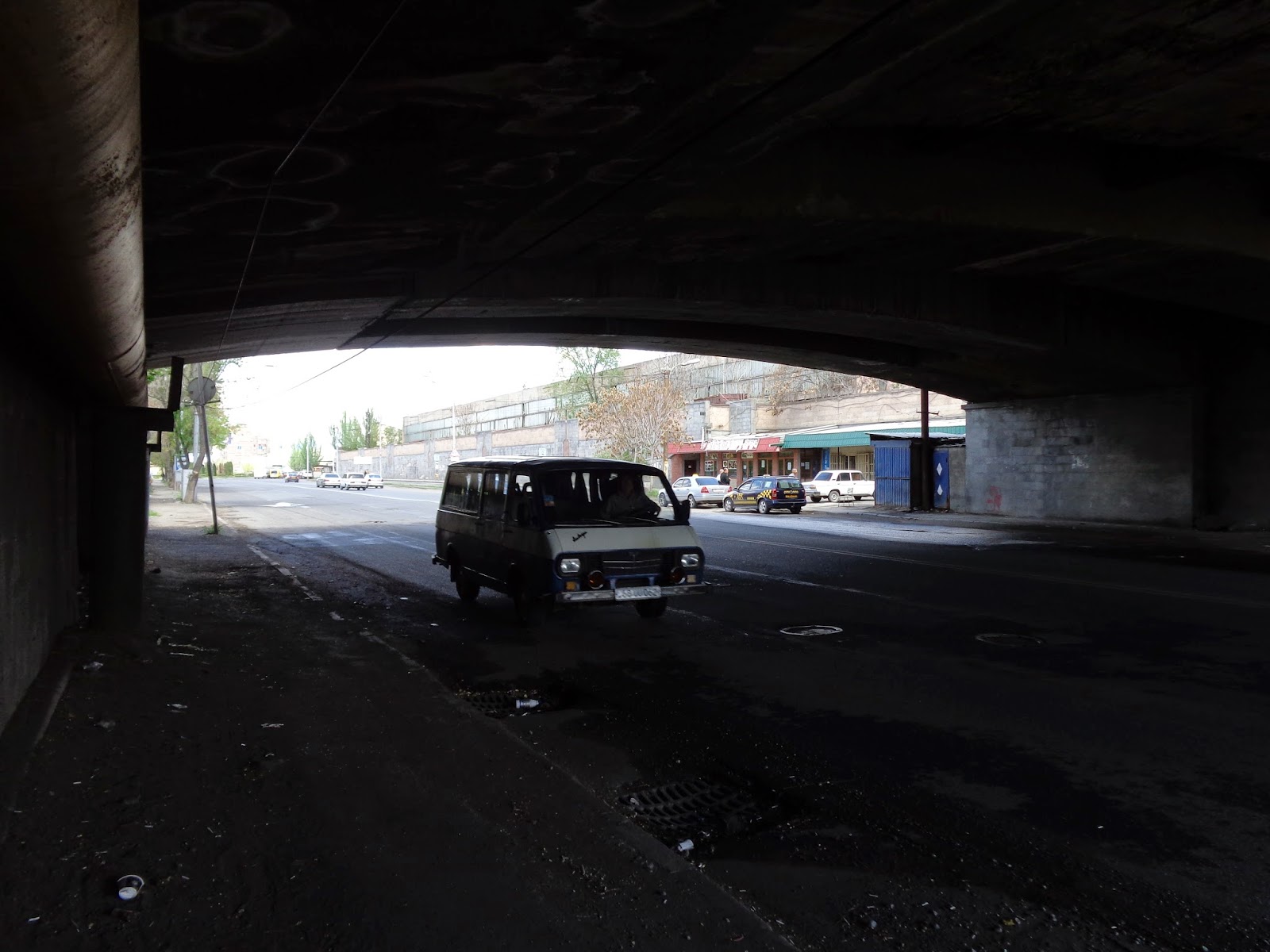 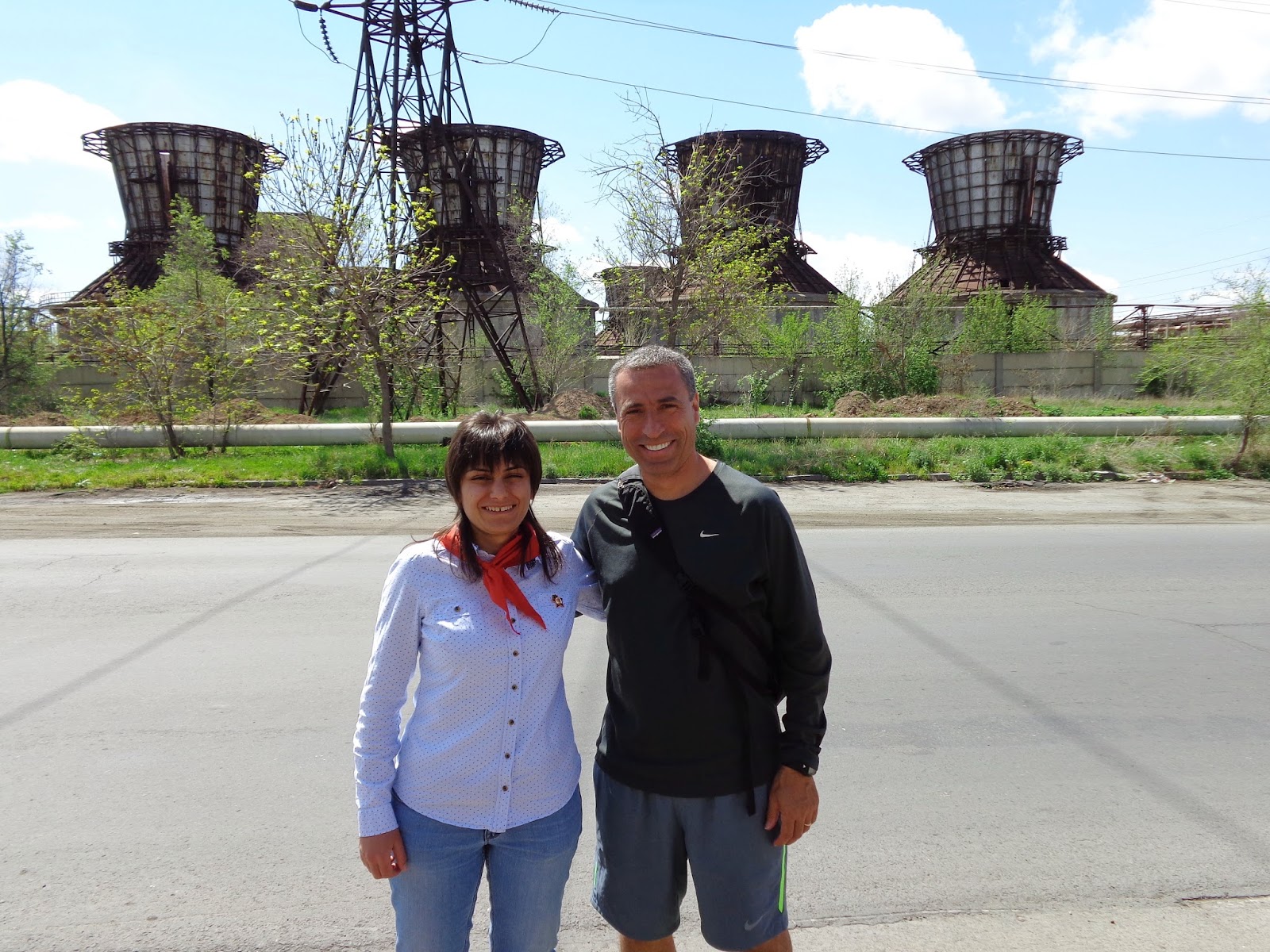 The tour ended with the special surprise...the only remaining Lenin statue in Yerevan, which is located just outside of the work shop of the artist who created it.  Although he had no particular affinity for Lenin, he wanted to preserve a piece of his work. 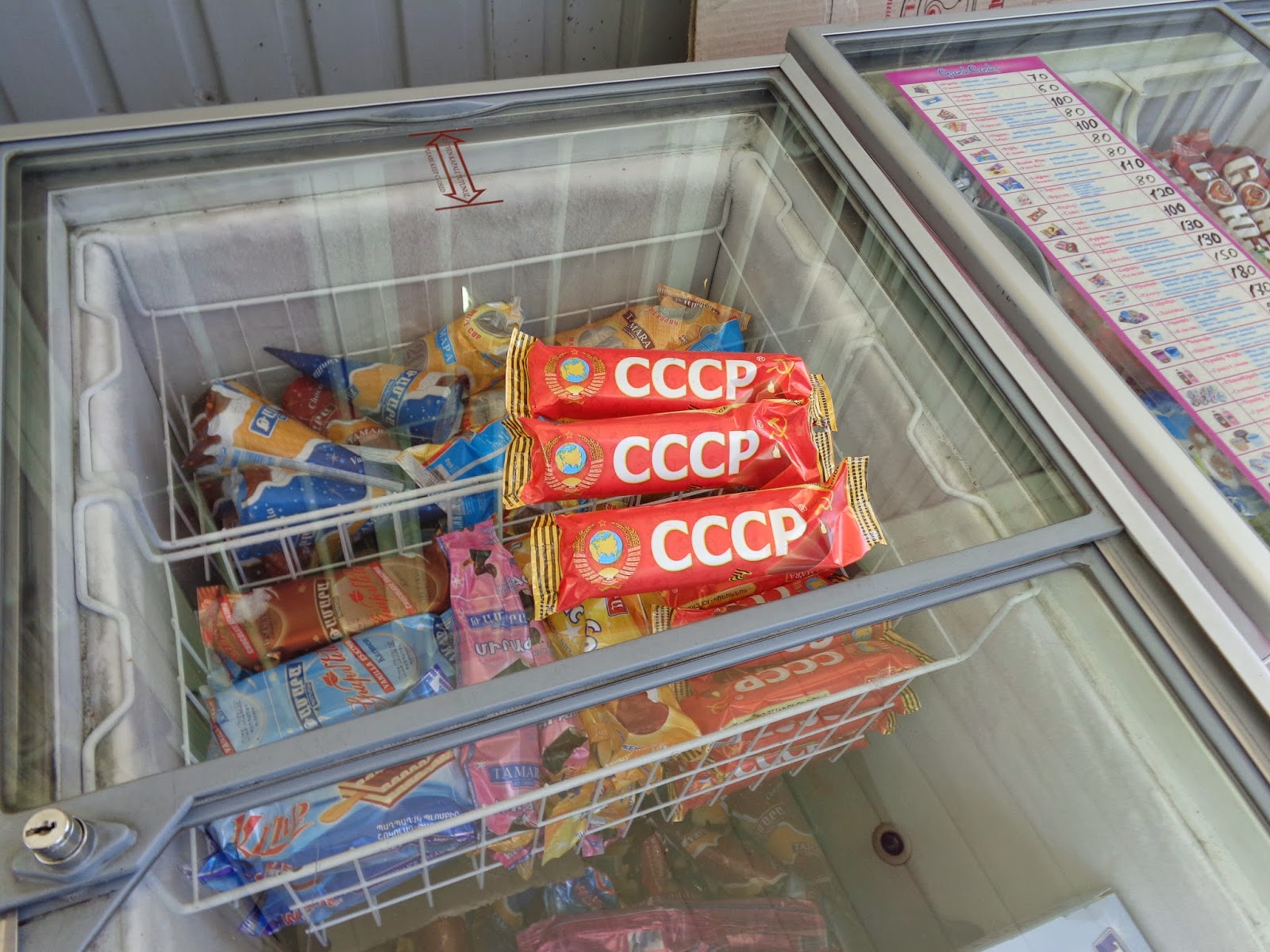 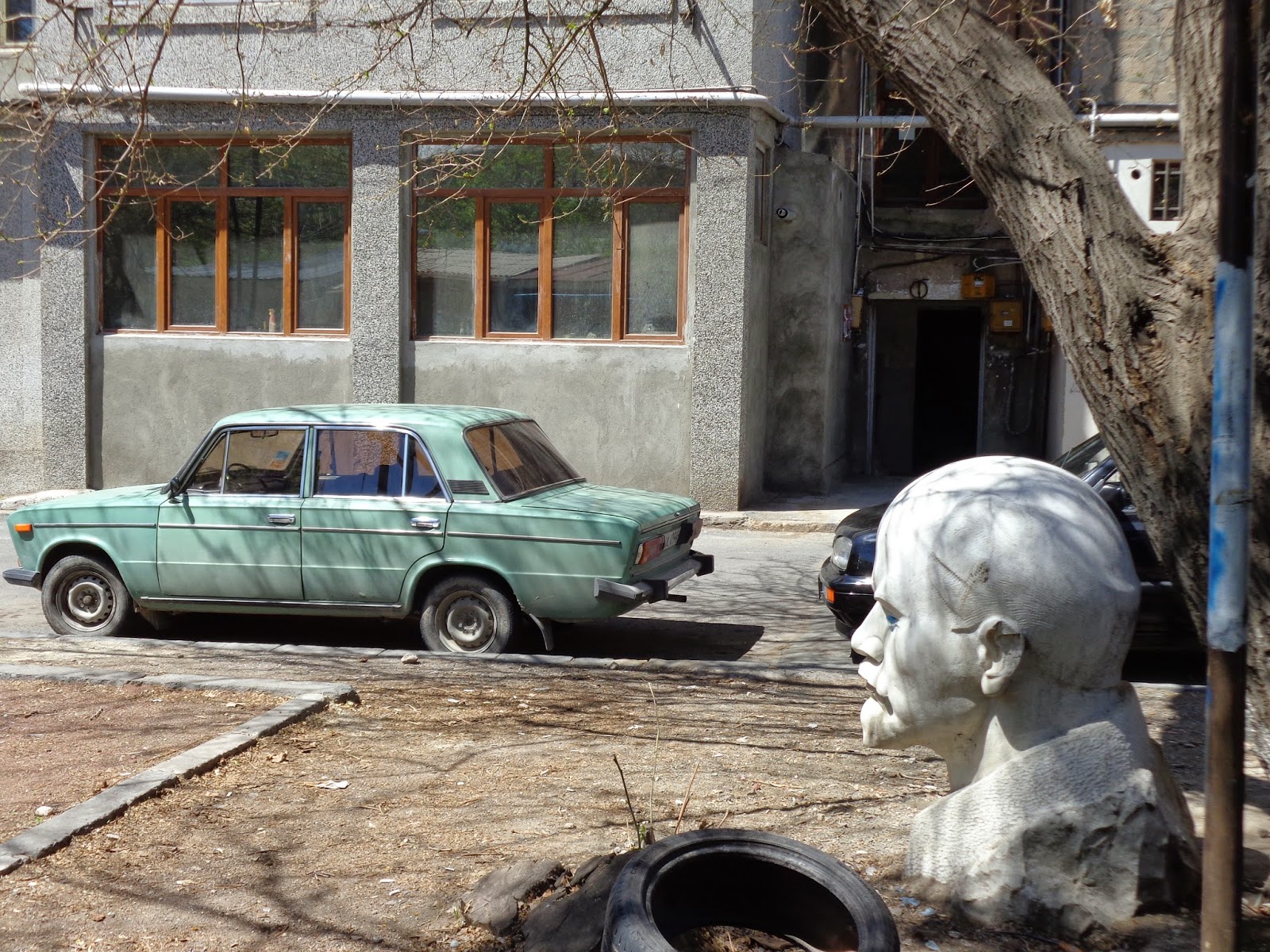 That evening I had another surprise as I returned to the hotel after my run.  Despite having walked through the park by the hotel 3 times earlier in the day, this was the first tine that I noticed the park was planted with tulips - the symbol of Parkinson's. 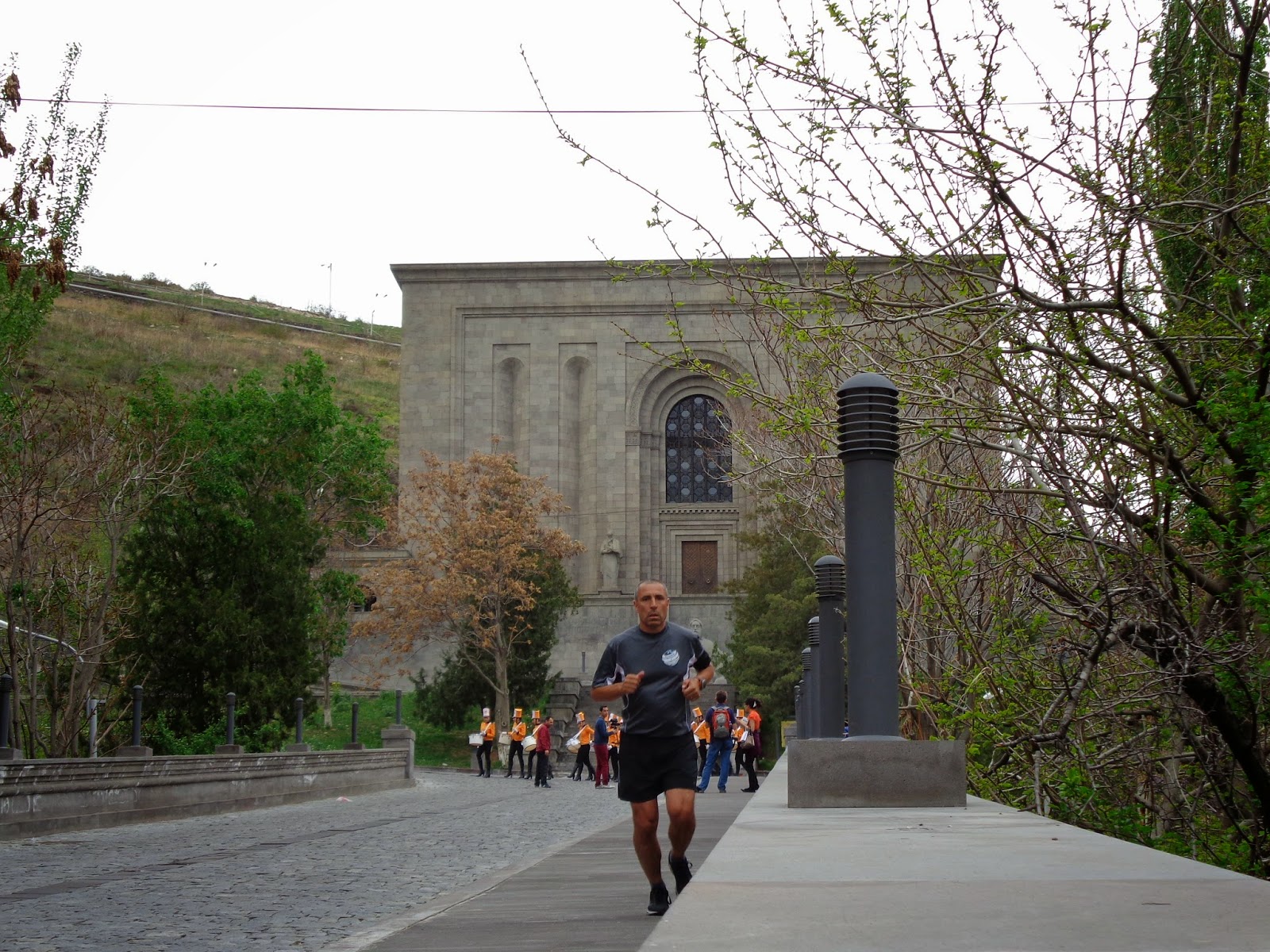 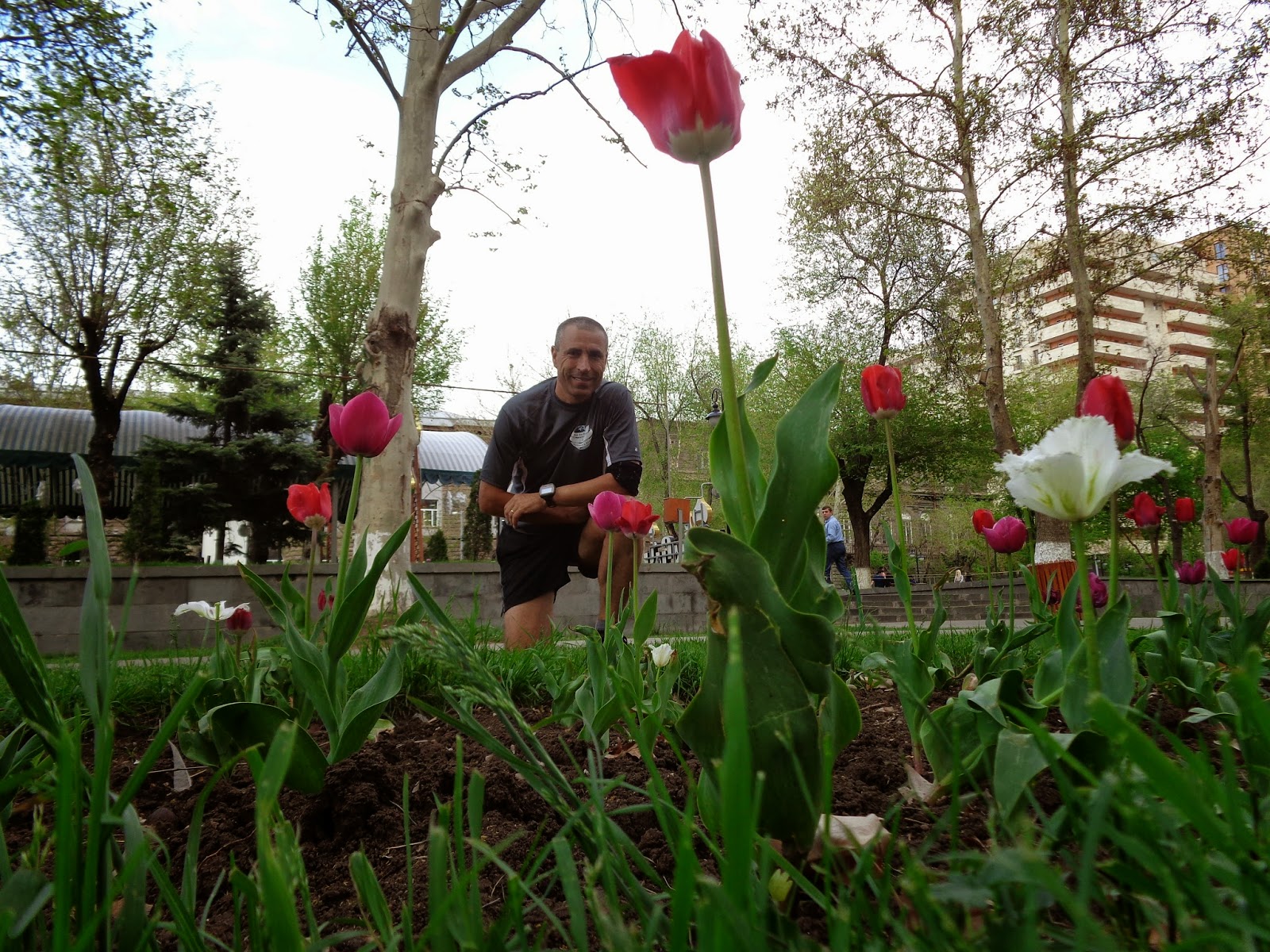 The next day I was to travel to Tbilisi, Georgia and there were 3 transportation options for this trip.  First, an overnight train that takes 11 hours.  Next, a private taxi that takes 5 hours.  Finally, the option that I chose -a minivan. The choice was made because of the price and I expected an uncomfortable 6+ hour ride. However, it turned out to be surprisingly enjoyable.

I was joined in the backseat by a couple around my age from Germany. The man had been to 101 countries and was full of interesting stories.  The middle two seats taken by a slightly older man and woman - who were not romantically connected, but looked as though the could be.  As we started on our way and those of us in the back seat wer getting to know each other over the blaring music, the woman made the strange choice to scold us from speaking so loud, rather than asking the driver to turn to radio volume down from "10".

The front seat was were the real entertainment was.  The driver's role seemed to be putting us a little on edge, by traveling at a high rate of speed, braking suddenly and most importantly serving from time to time.  The sudden changes of direction meant that those of us in the backseat had an experience resembling a mosh pit, while the lady in the middle (whose seat was not anchored down and would slide 6-8 inches with each turn) was essentially on a 6 hour amusement park ride.  The man riding shot guy was the real treat.  Appearing to be in his 80s and a bit frail, he moved was surprisingly quick with his walking can when we made sudden stops a local stores.  During the first couple hours there were at least 3 stops and the driver and the old man seemed to have their own agreed upon itinerary for these stops.  At first I thought the guy was collecting his favorite brews that he couldn't get back home, but when we finally made a stop where we could all get out and I was offered a swig of his beer, I realized he was actually purchasing for immediate consumption.  After awhile he took to getting rid of the empties by tossing them out the window as when sped through through the country-side. 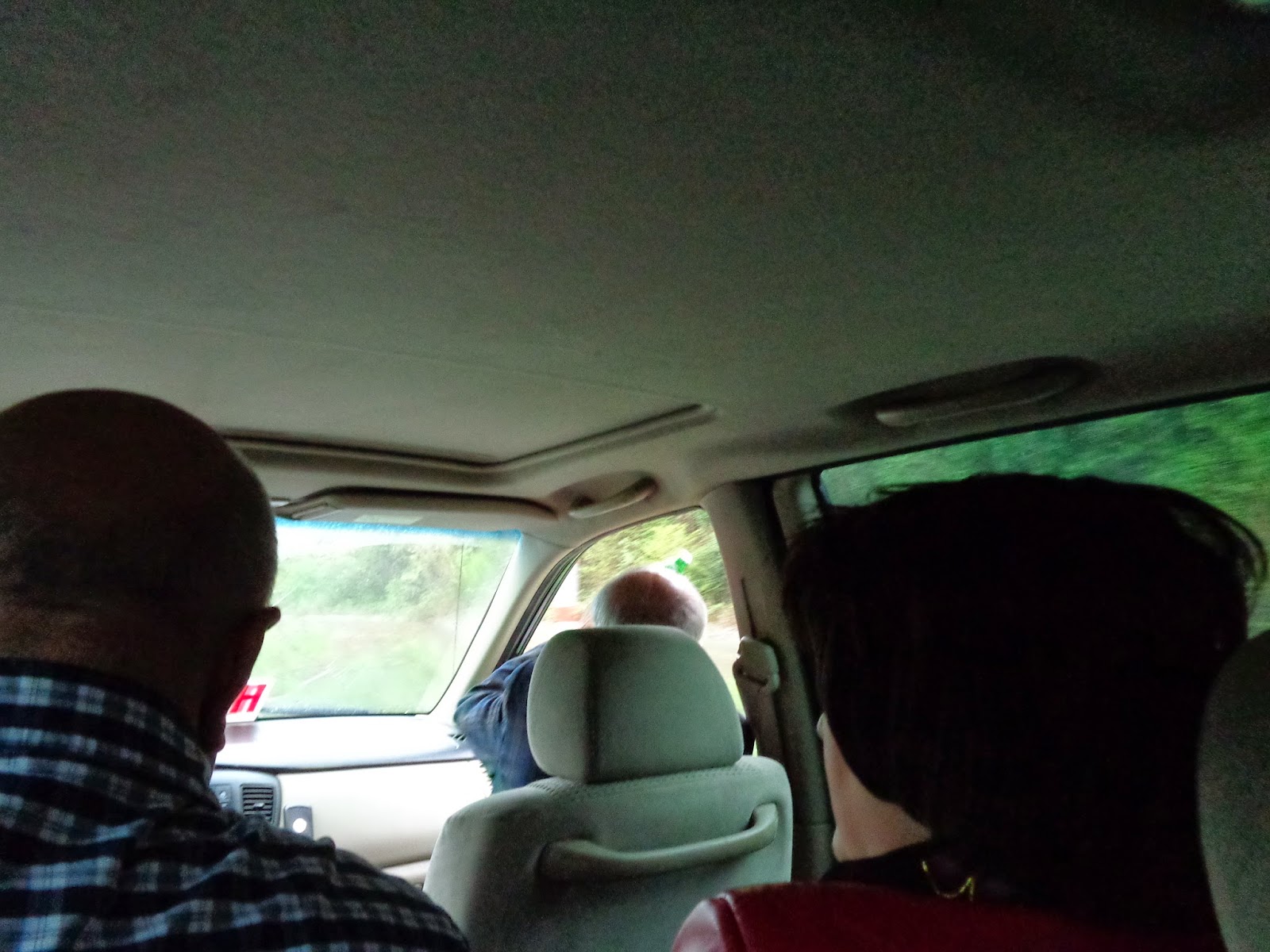 At one point half-way through the drive we pulled over to side of the street, so the poor lady in the middle could get out and vomit (having been overcome by motion sickness caused by the Tilt-a-Whirl experience) and the old man used this as an opportunity to smoke a cigarette (while the driver was okay with alcohol consumption, he did not approve of smoking in his vehicle) and the whole image was so ridiculous that those of us in the backseat couldn't help but just laugh. 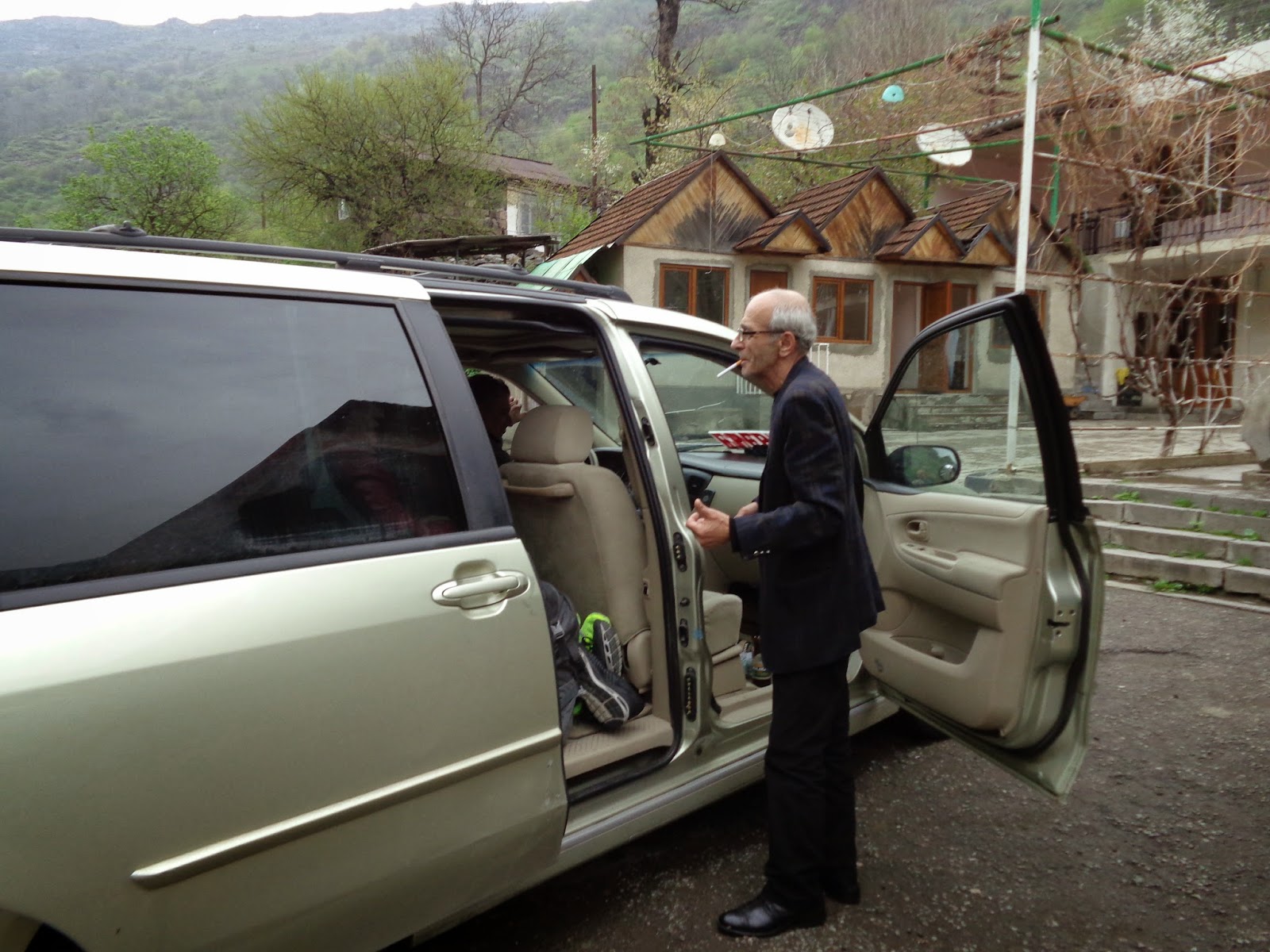 The view during the drive was most remarkable for the uniform character of the buildings.  Although we moved from agricultural land to mountain canyons - from the time we left Yerevan until just before we entered Tbilisi, it was as if not a single building was newly constructed in the past 30 or 40 years.  Those buildings that were present looked as if they were dying a slow agonizing death.  Meanwhile most of the industrial buildings - immense factory complexes in every major town we past - had already met their demise and were slowly decaying. 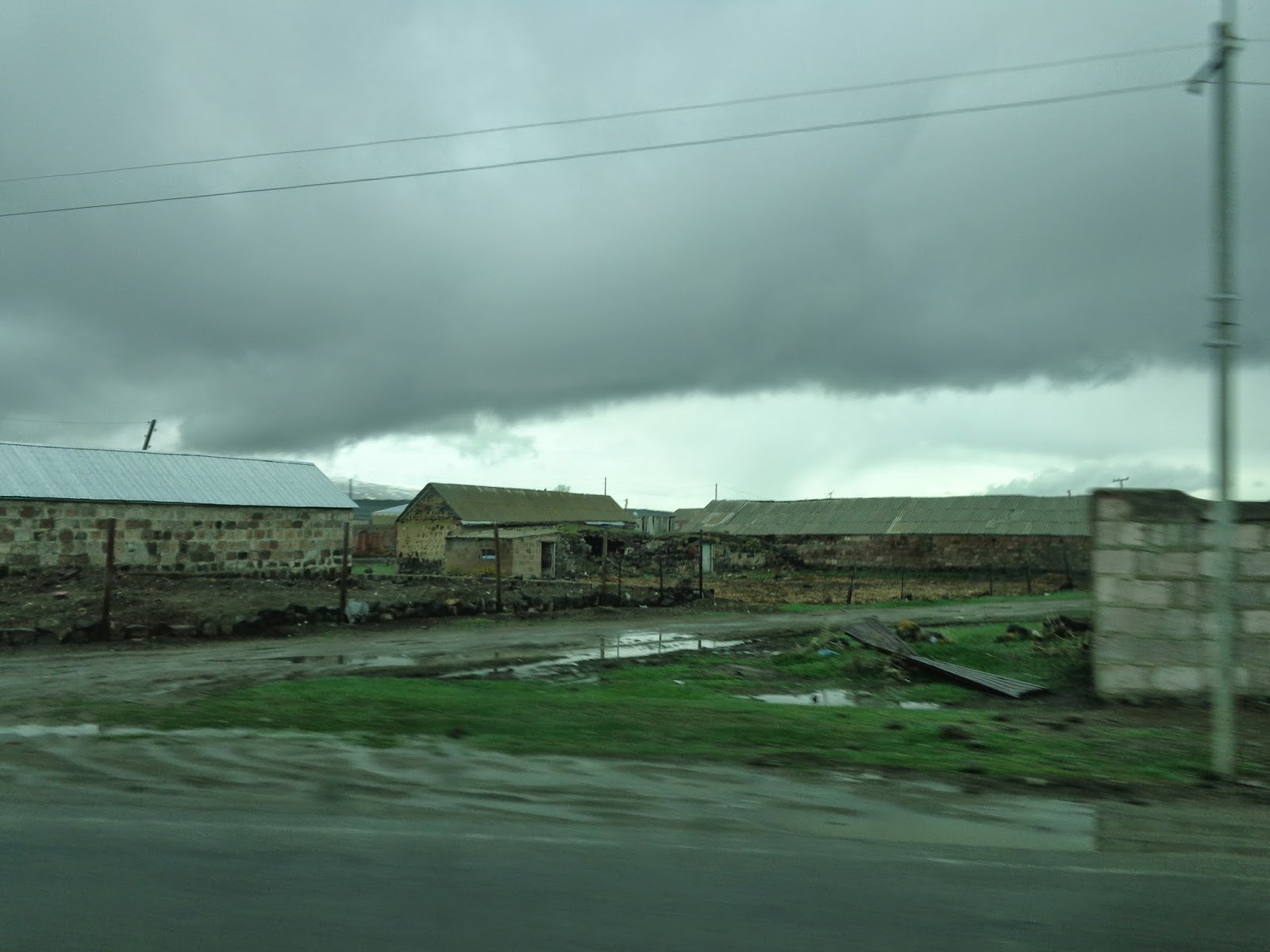 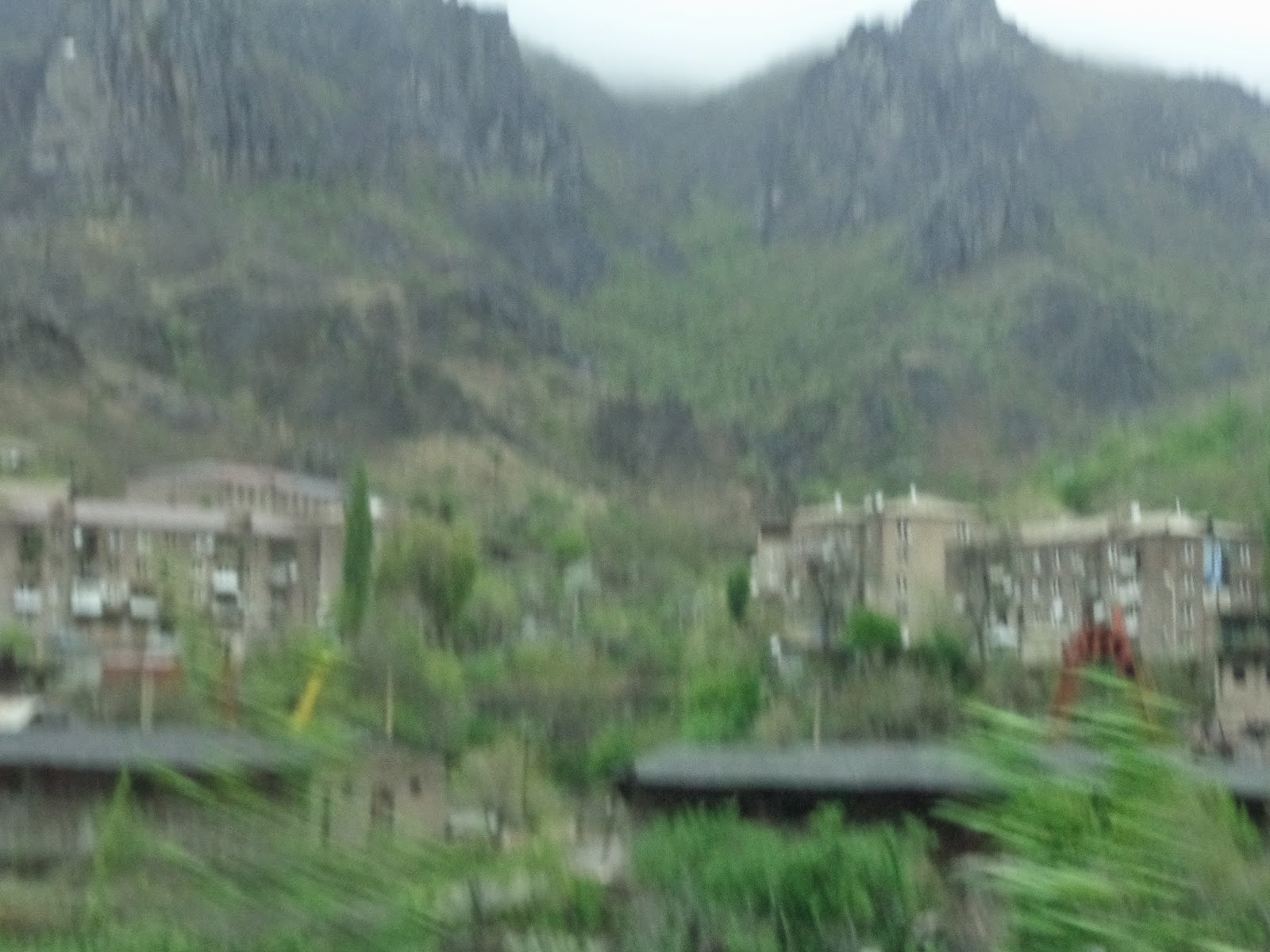 The road itself was not much of a highway, but more of  a country road struggling to survive under the strain of serving as the main thorough-fare linking two capital cities. 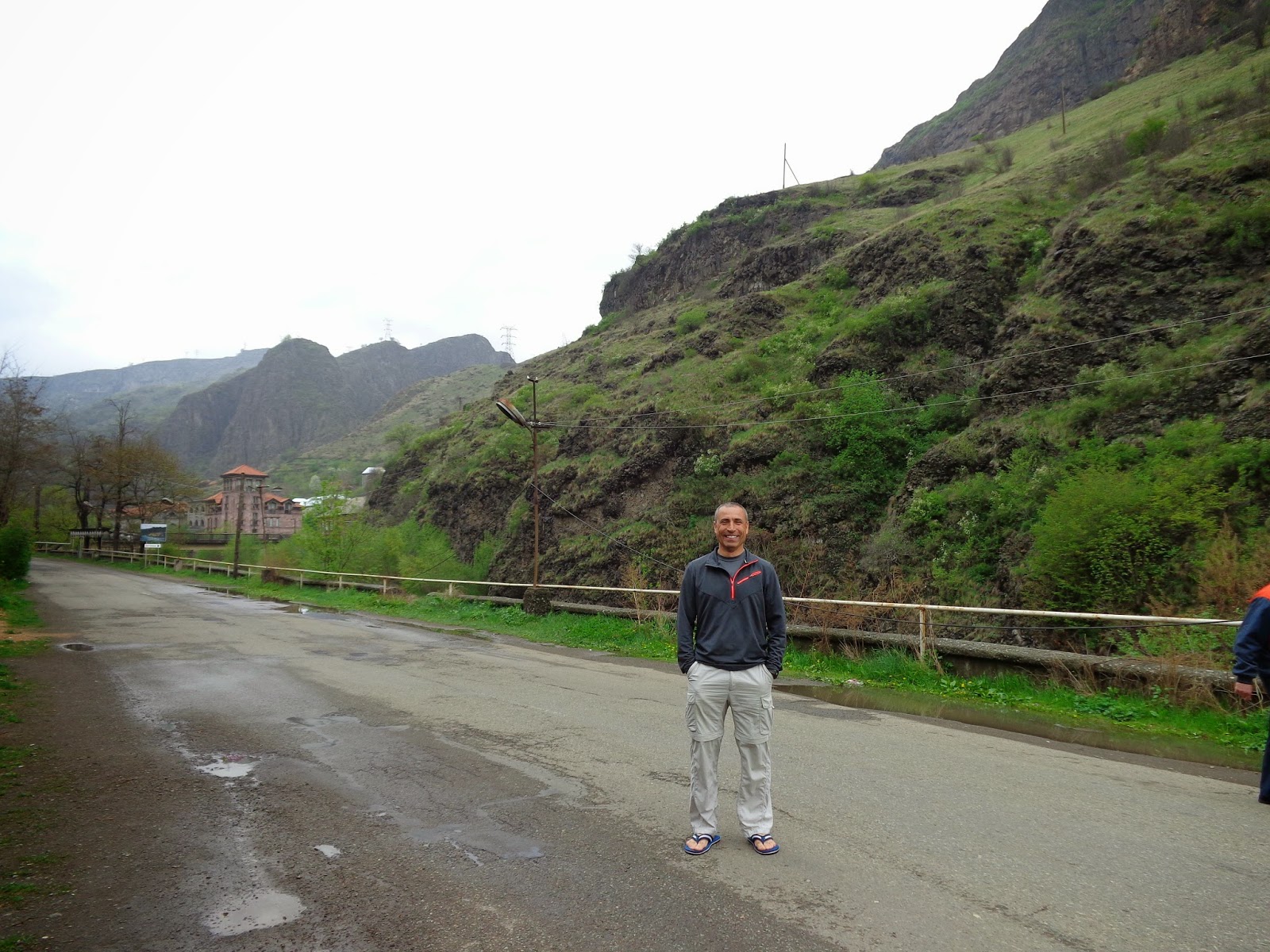 Once we finally arrived in Tbilisi, Georgia their could be nothing more surprising than my first sight of the Georgia 444 Hotel.  Although I had seen photos on the internet when I booked the place, seeing it in person was something else. Something along the lines of seeing Mt.Everest and Petra, but more personal.  However, I don't think I want to be too attached.  When I asked the manager on duty what the significance of the name was, he had trouble translating the meaning of three-4s into English, but came up with "it is something like a good place to go when you die".  When I asked him if he meant "heaven", he only replied "something like that". 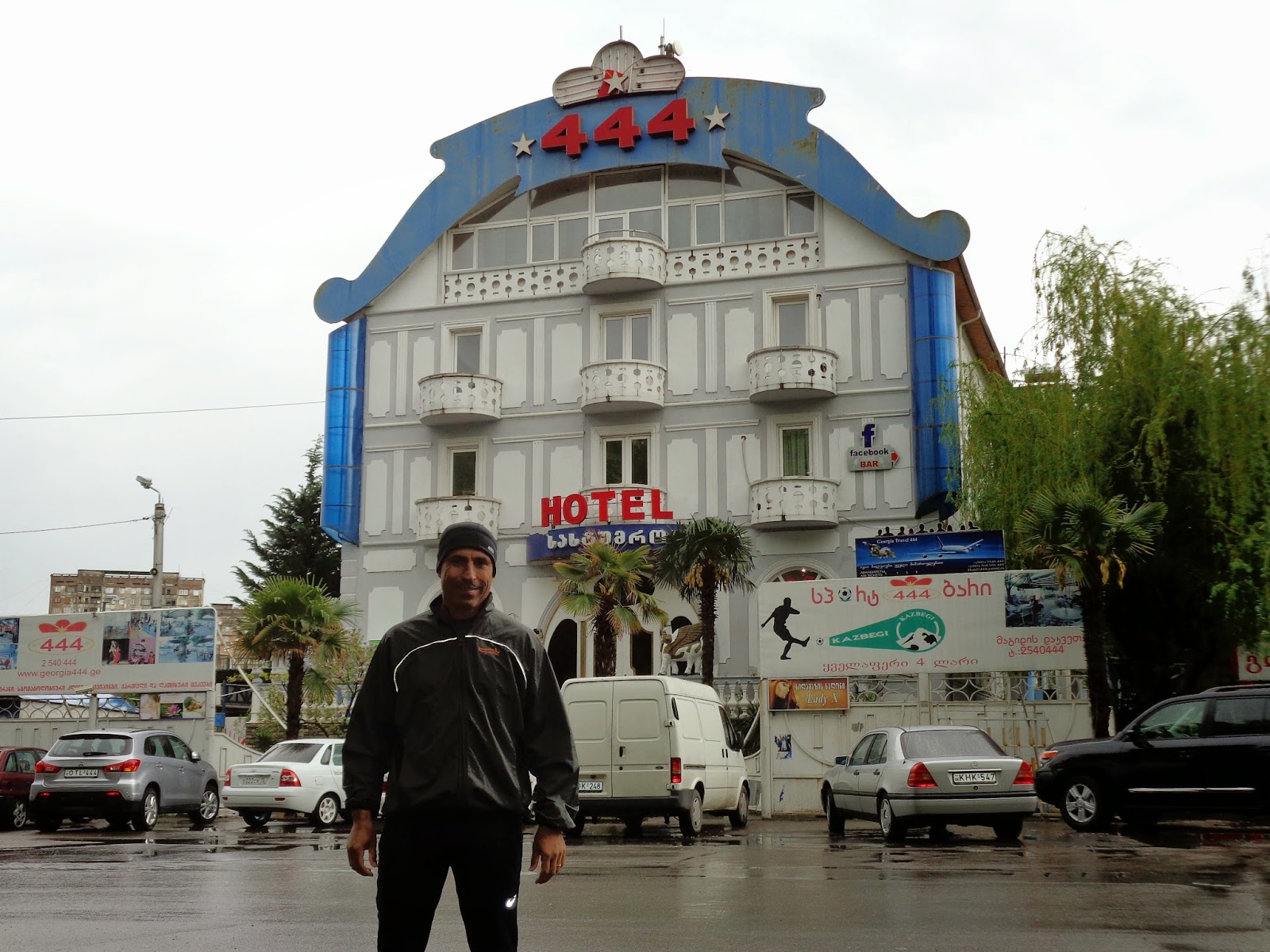 Posted by Marcus Cranston at 11:52 AM