I was given some insight into the chaos that awaited me in Bangladesh, when I arrived at the ticket counter for Biman Bangladesh Airlines in Kuala Lumpur. Perhaps the longest check-in line that I have ever encountered was made up of individuals with the most luggage per person I had ever seen.  I was also surprised that the short route to Dhaka was flown aboard a jumbo jet, but upon landing in Dhaka it was all clear. Parked next to our gate were large jets from Kuwait Air, Emirates and Etihad.  The big jets were needed to shuttle workers from Bangladesh to more affluent countries. 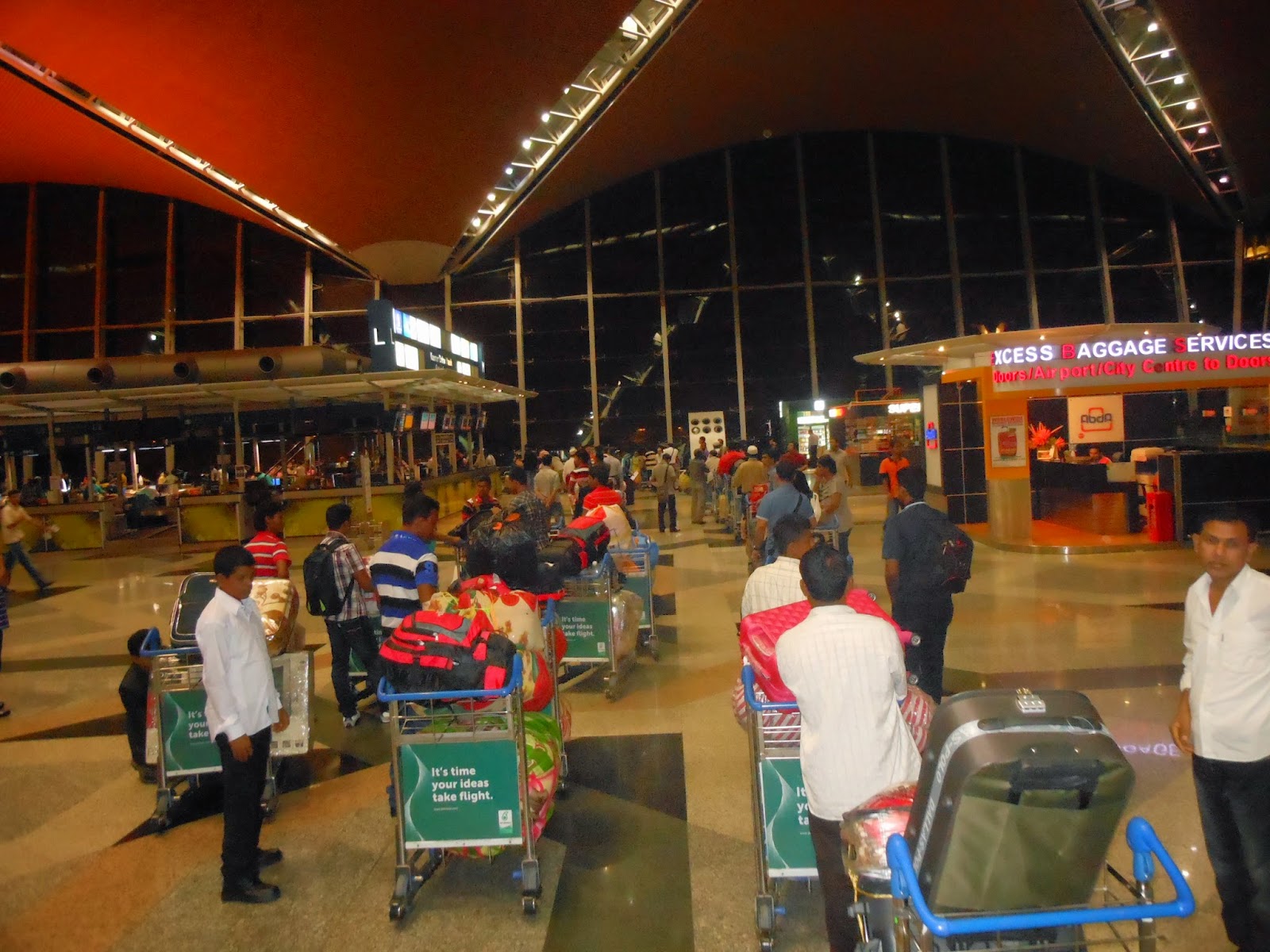 Upon leaving the airport in Dhaka one quickly sees the faces of desperation up close.  With my cab window half-way down to fight the heat, I was immediately met by a number of people begging, including one woman who kept her hand inside the taxi until she could no longer match the speed of the accelerating vehicle.  Transportation in Bangladesh seems to have a specific hierarchy: things pulled by man on foot, things pedaled, things that used to be pedaled - but now have an electric motor attached, auto-rickshaws and finally, cars.  During my few hours in the city I used all but the first, which is saved for transporting goods. 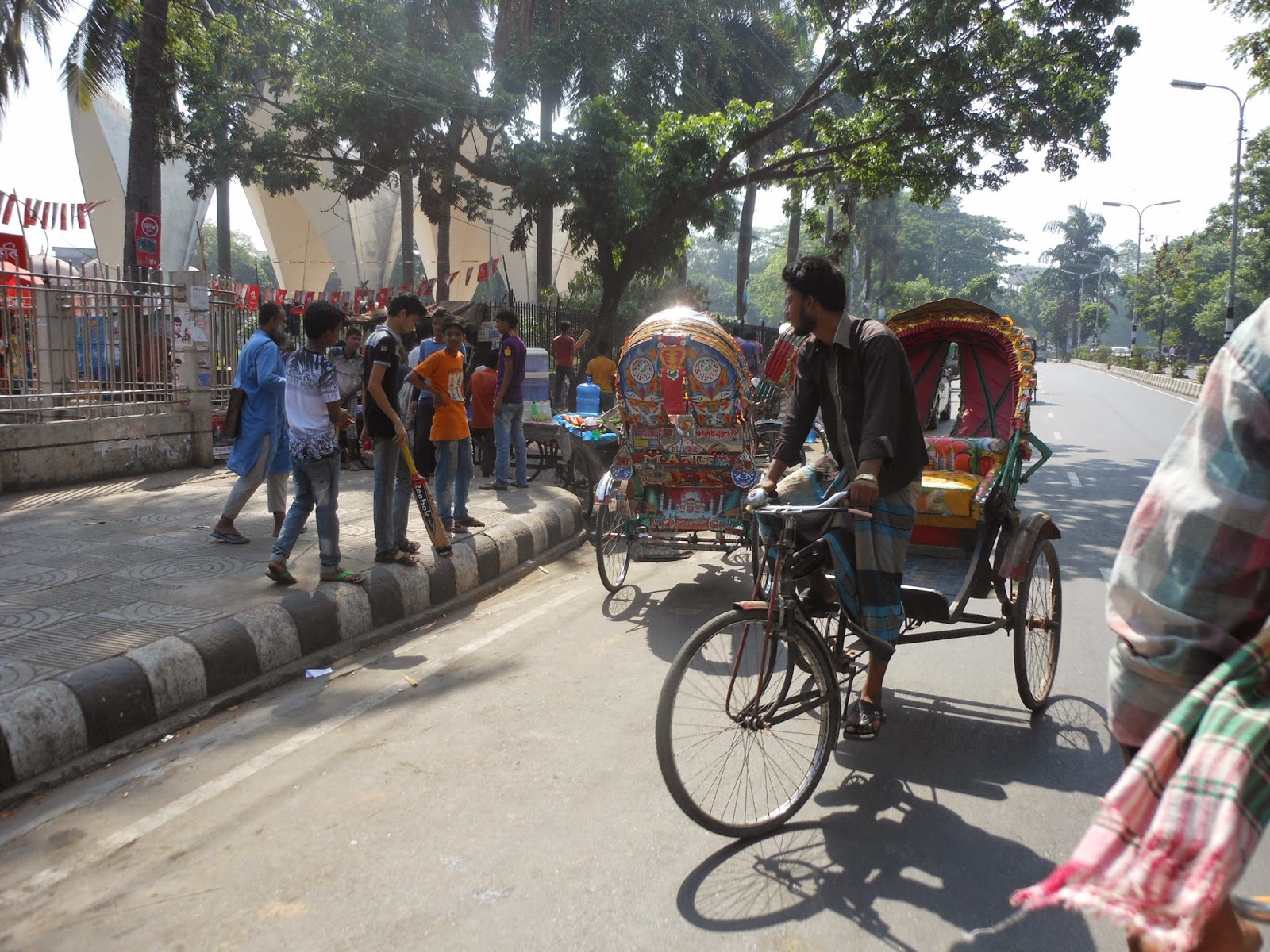 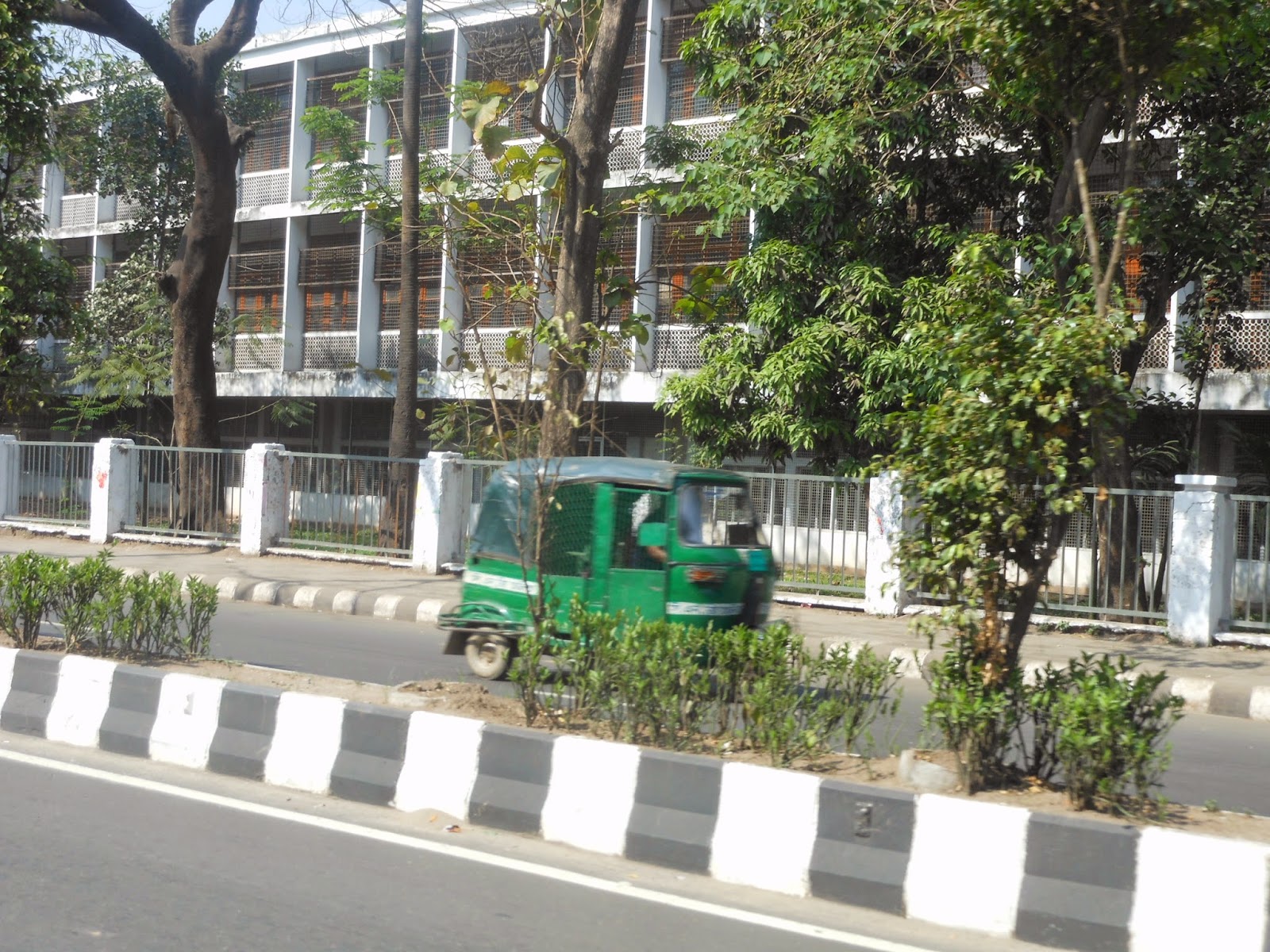 I started my time in Dhaka with a visit to Bangabandu Sheikh Mujib Medical University.  I had previously made contact with Dr. Abu Rizvi, who let me know that they did not have groups working on Parkinson’s Awareness in  Bangladesh, but he stated, "we few neurologists recently developed a society of PD and other movement disorders."  Unfortunately, due to the national holiday, he was not available to meet on that day.  In the next couple hours the images I would see in Dhaka would give me a perspective as to where Parkinson’s Awareness might be on the priority list for this city and country. 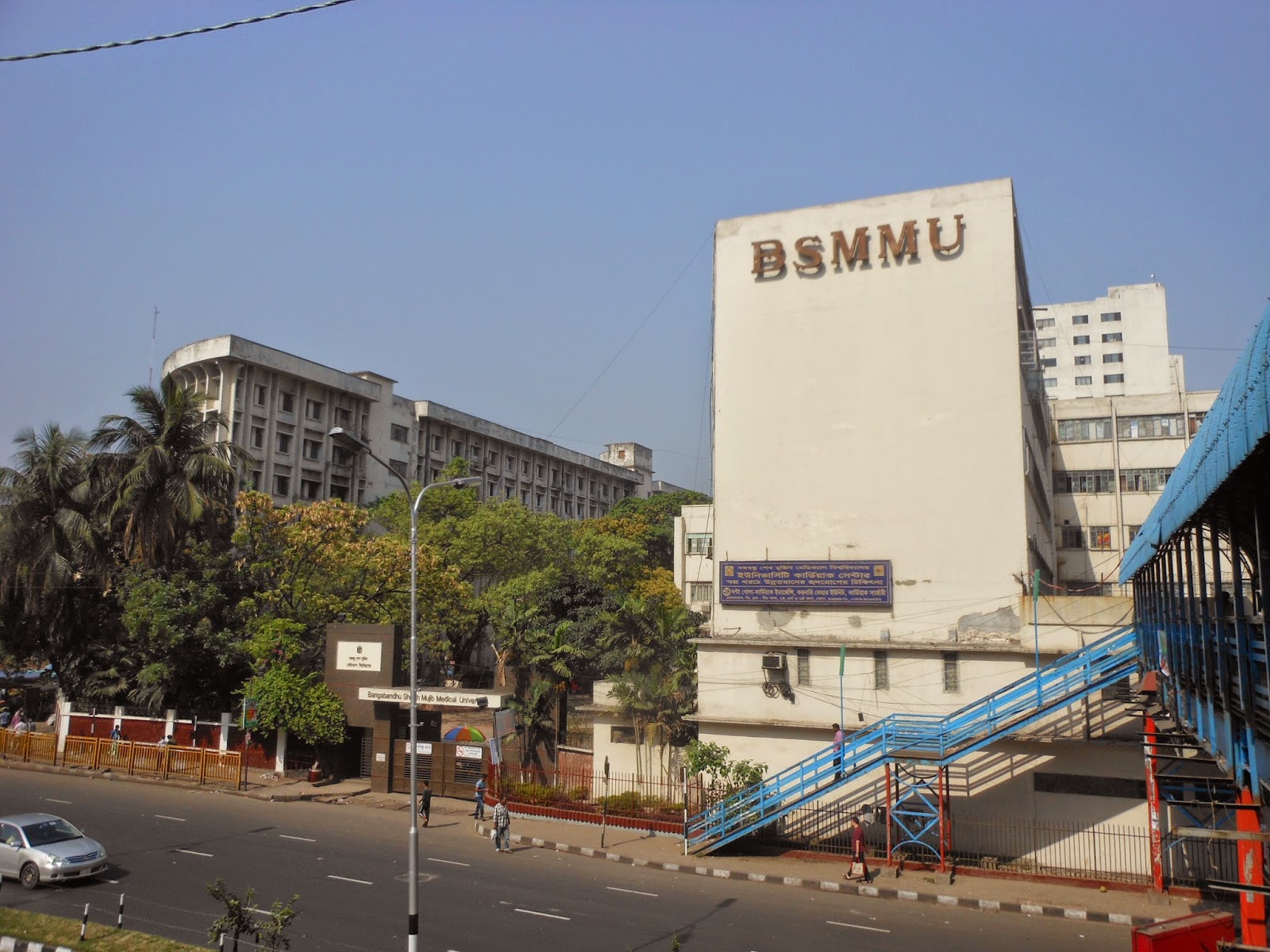 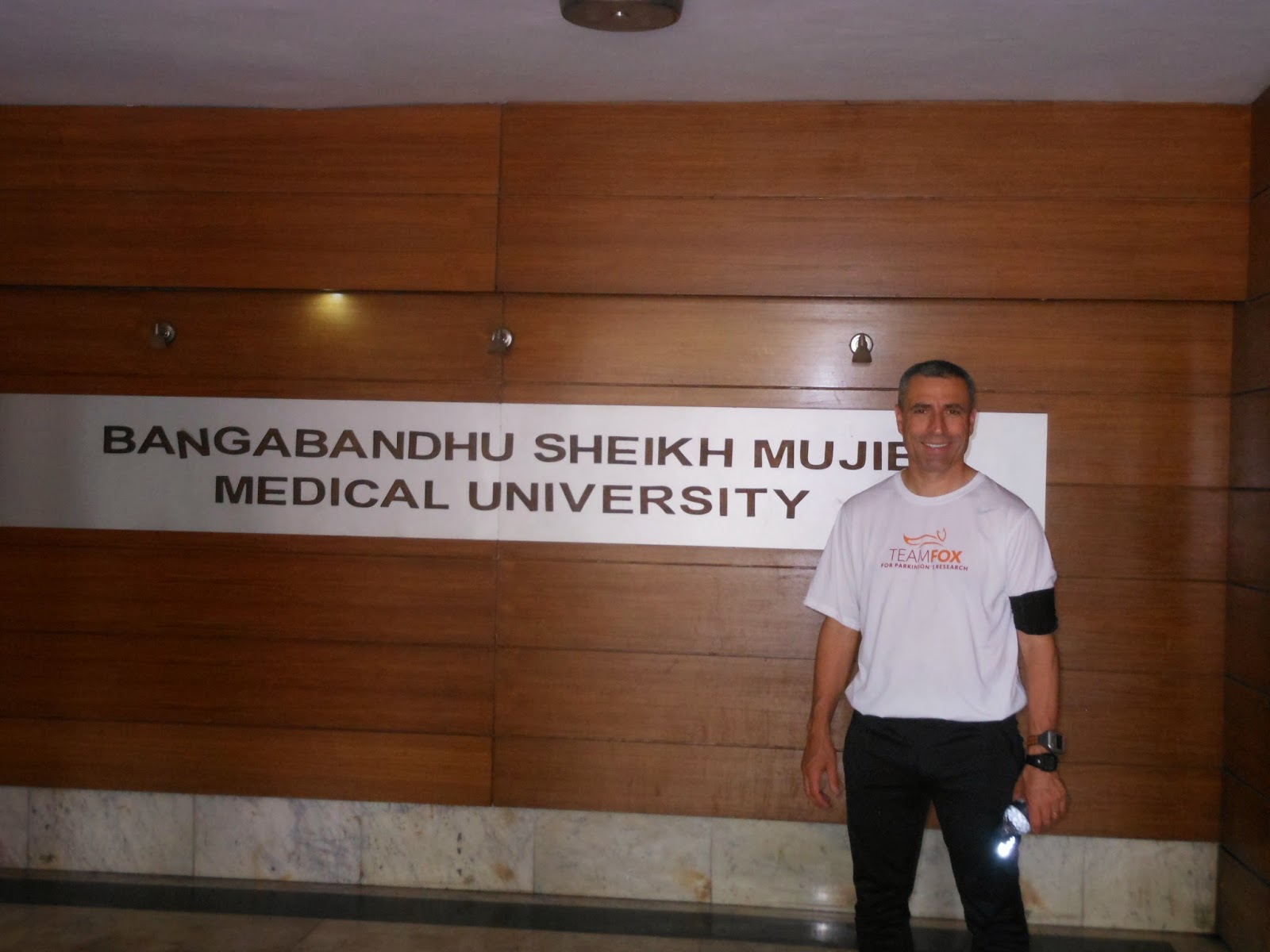 I decided to begin my run at Ahsan Manzil, The Pink Palace.  Given this is a major landmark for city and is located on the river, this suggested it would be the perfect place to run. 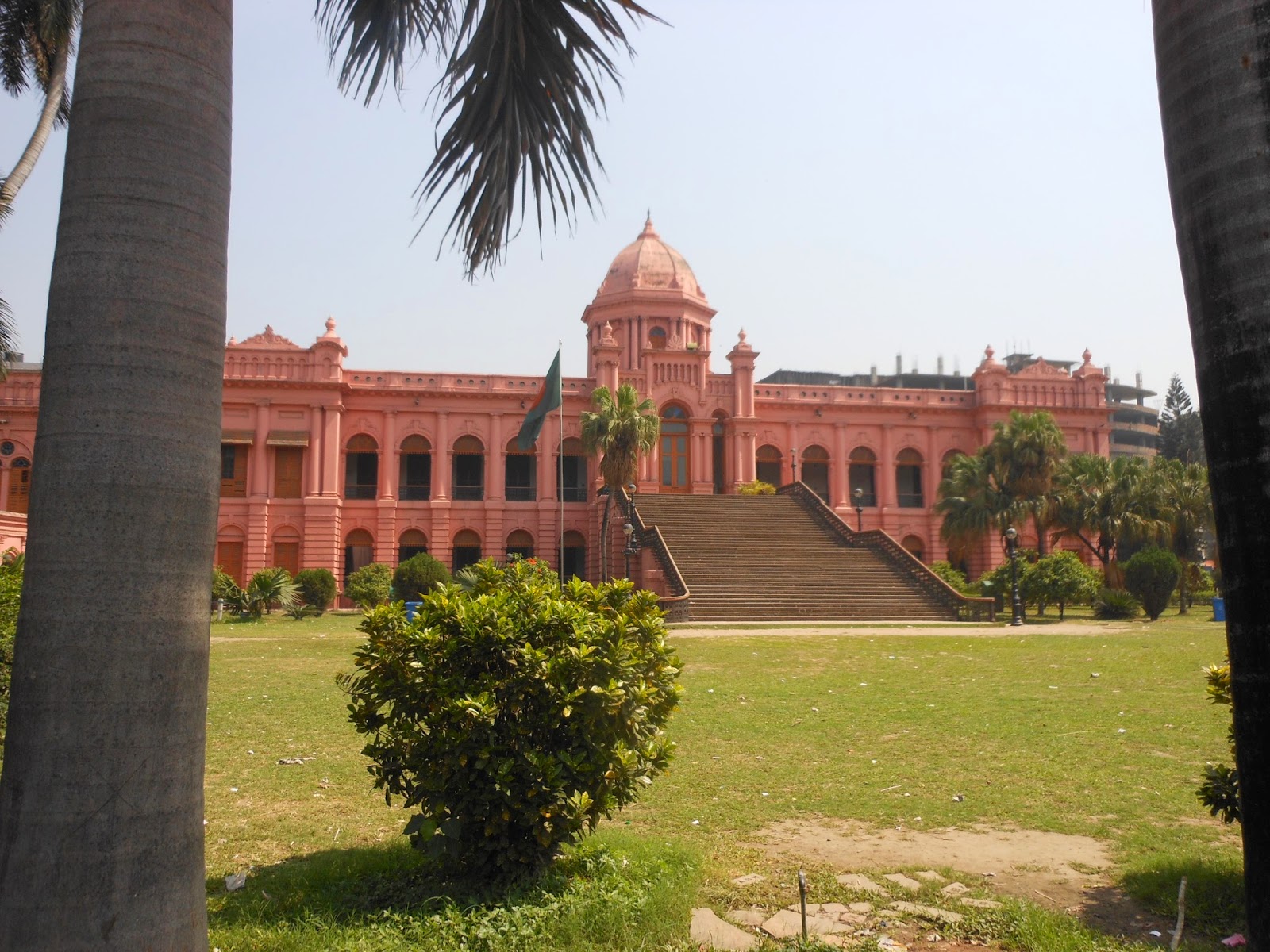 Nothing could be further from the truth. I arrived by pedicab and was instantly engulfed in a crowd I would associate with a large sporting event or concert, but this was actually daily activity in the market/port area.  I could not even walk, let alone run. 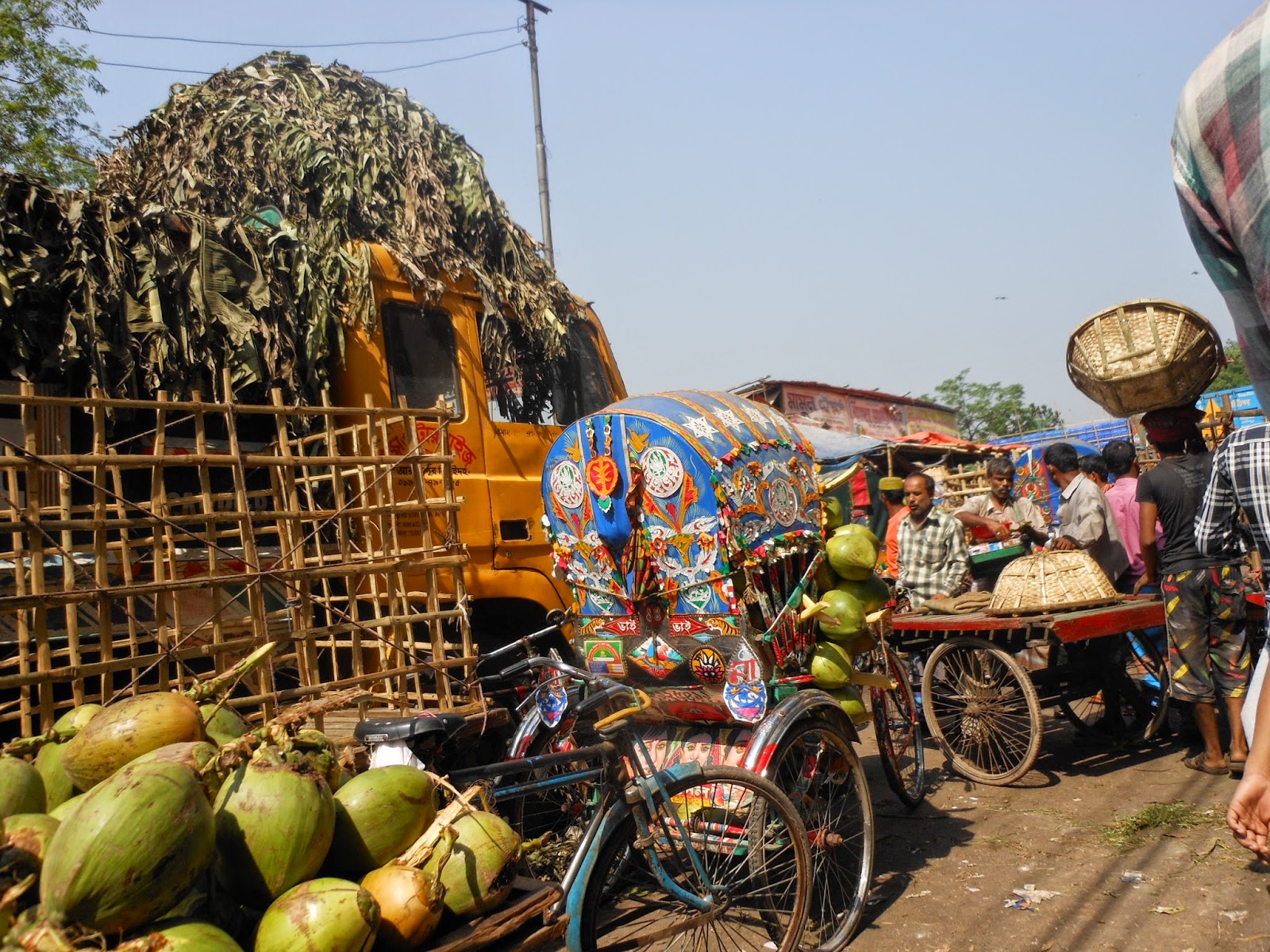 I finally made my way to the main bridge over the river and ran the length of the bridge four times before continuing down the road in the direction of my hotel.  Four miles later, I jumped into an autorickshaw for a ride back to the hotel. 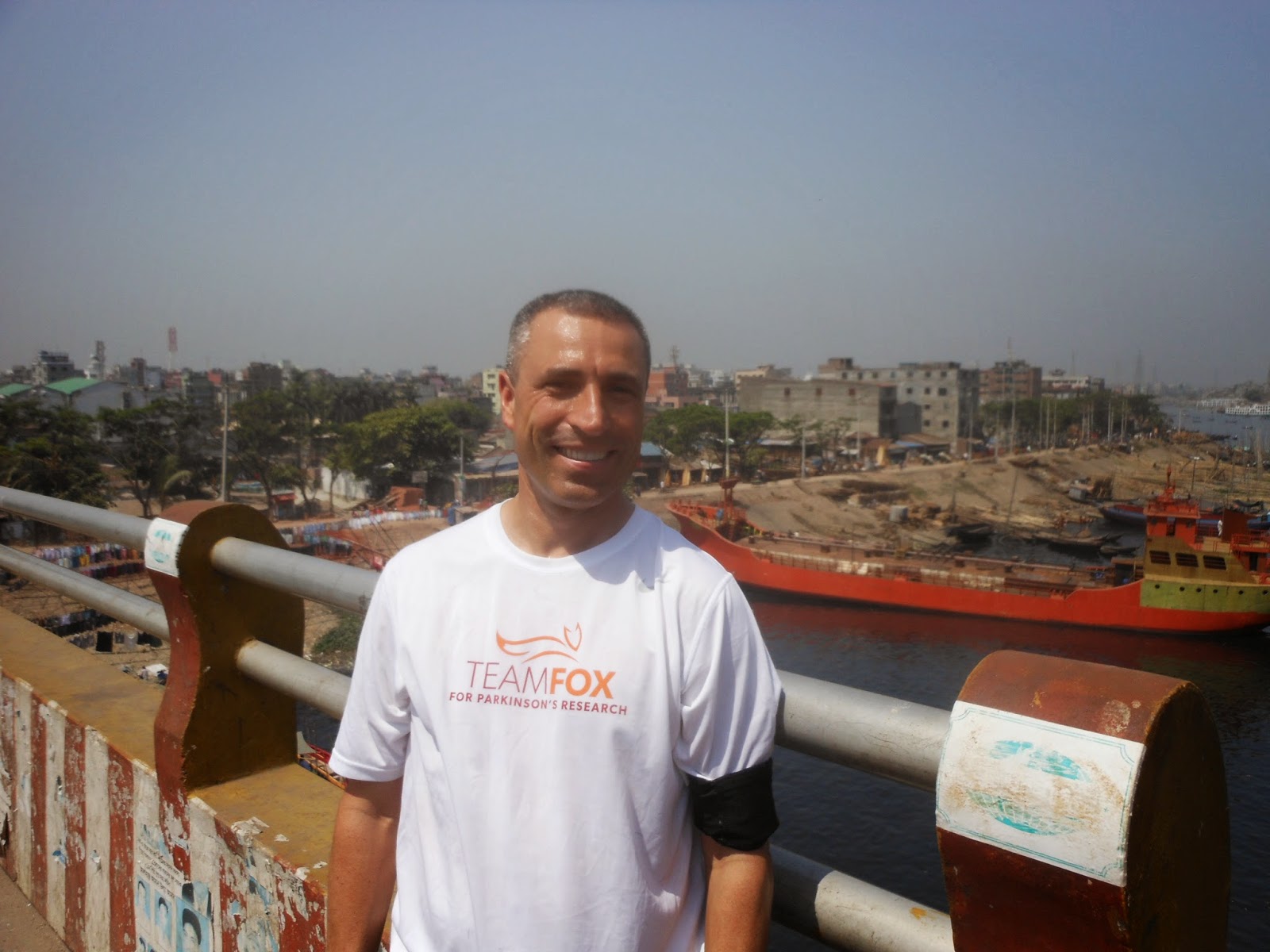 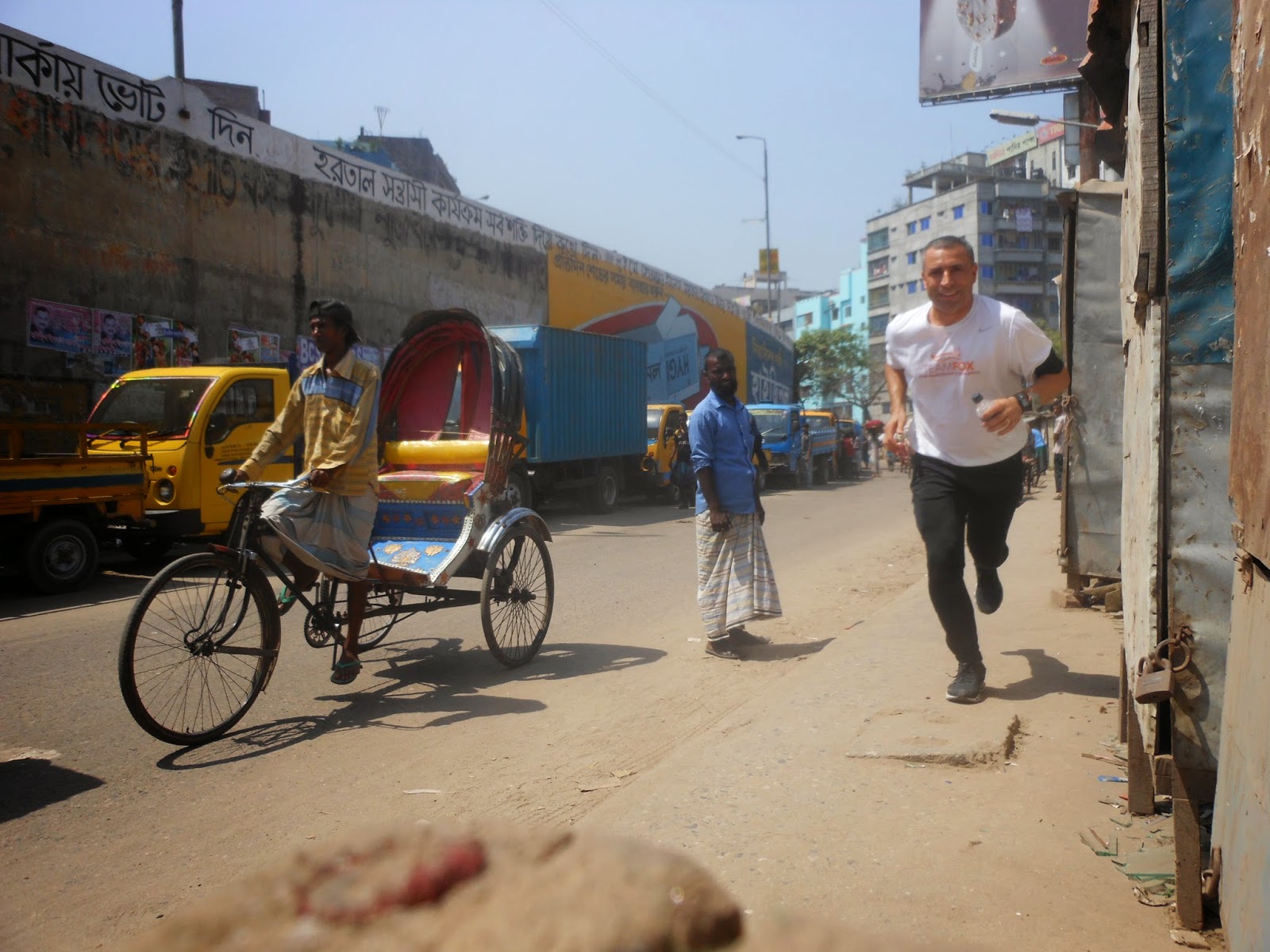 During the run, I encountered open sewers, huge garbage piles, every form of manual labor imaginable, multiple dead large animals and a man with open wounds involving his entire thigh with exposed bone and no bandaging.  In such a setting it is clear that Parkinson’s care, support and awareness cannot be the primary priority of the government or health care system.  However, if those with the most at stake – PwP, family and friends – could be given guidance to take on these tasks, perhaps progress could be made, even in a desperate environment like this.  I wish Dr.Rizvi and his group luck in this endeavor. 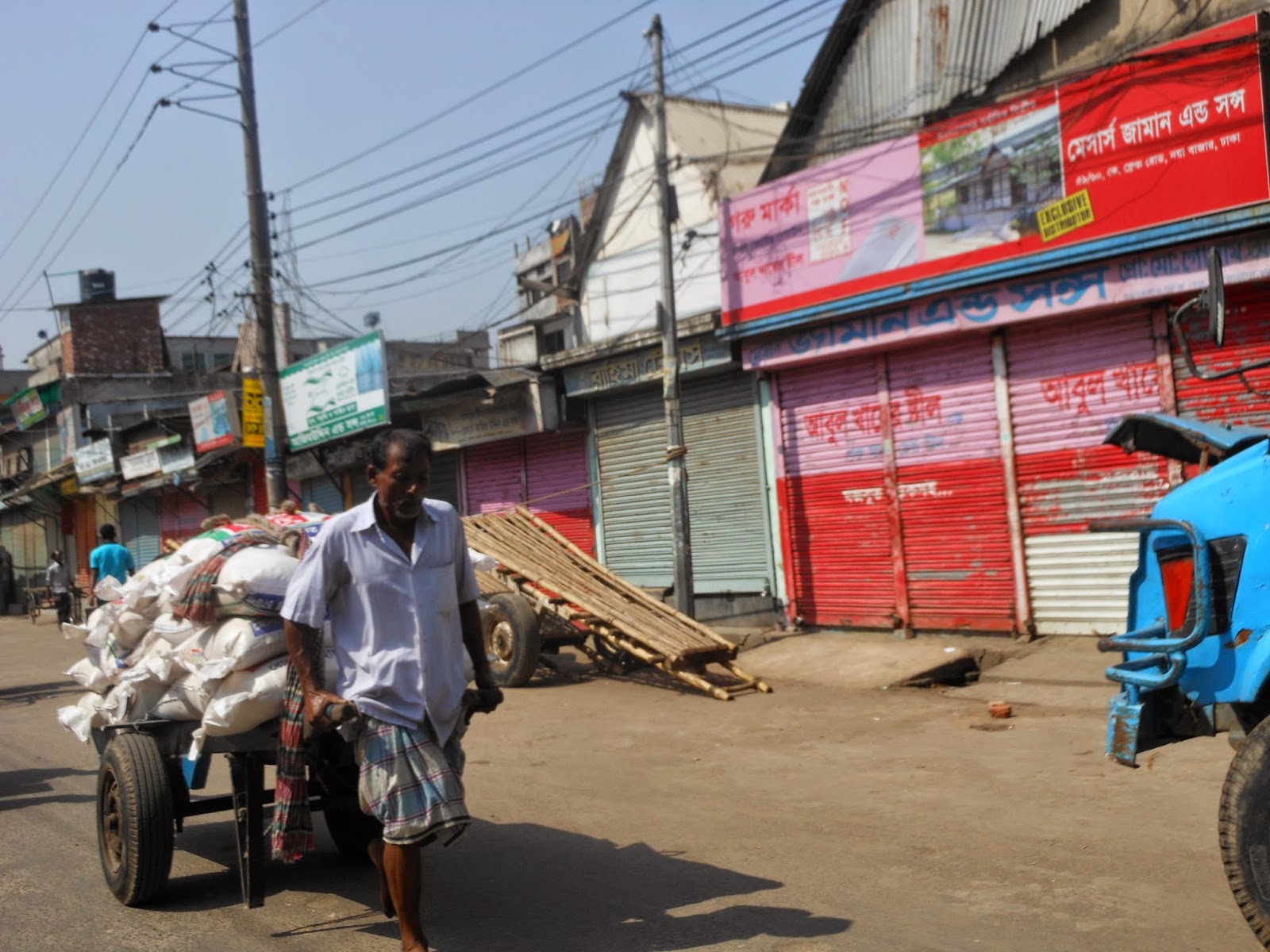 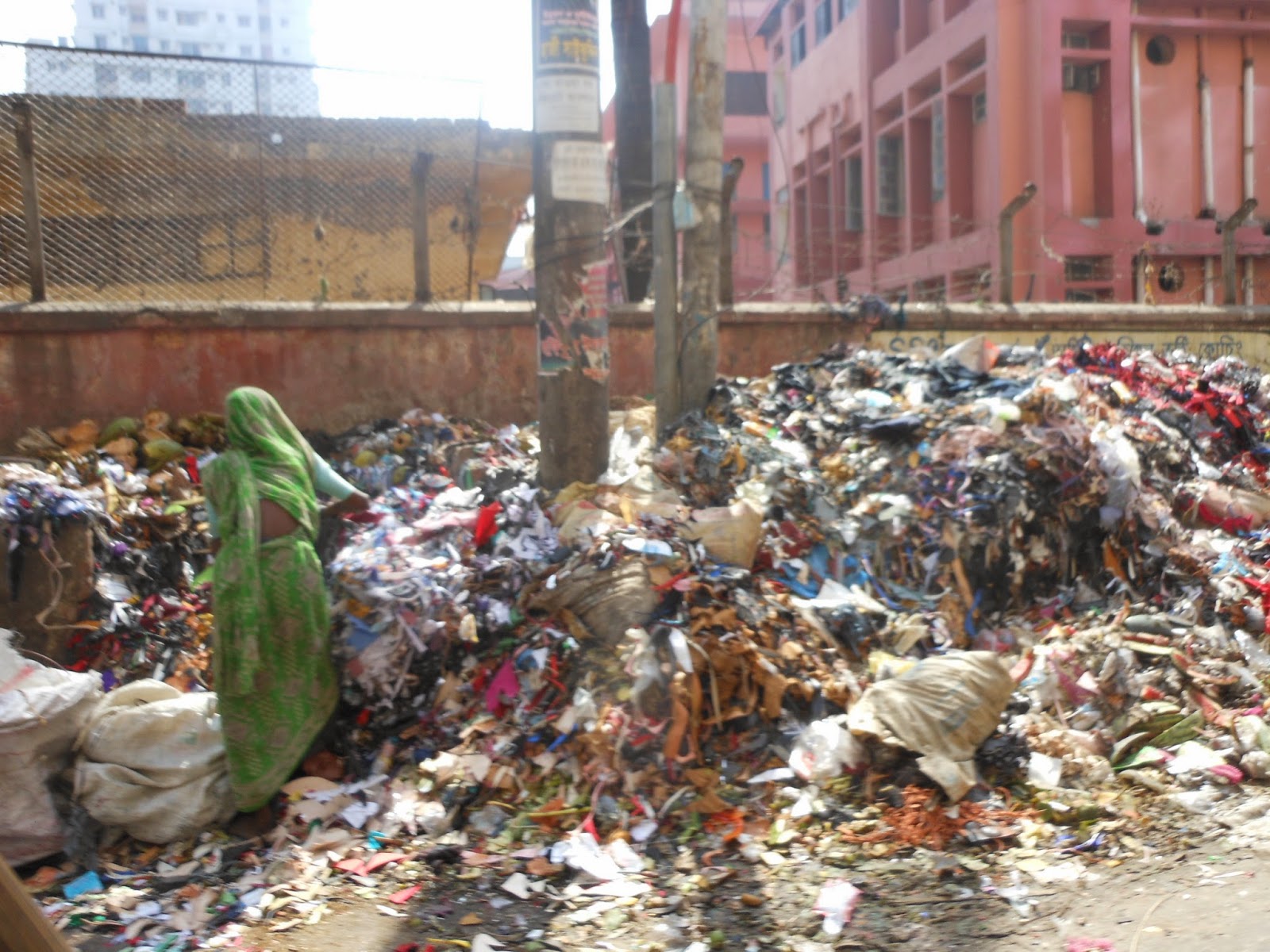 I will close with an extraordinary story about the people of Bangladesh.  For my brief stay, I checked into a hotel, as $2O seemed a great price to safely store my bag and be able to take a shower after running in the extreme heat.  The staff at Hotel 71 were quite intrigued by my project, including the guy who was “pretty sure you will have the Guinness record”.  After my autorickshaw got lost on the way back to the hotel, I had to make a mad dash to the airport to catch my flight to Kathmandu. When I could not find my phone later that day, I figured it was somewhere deep inside my pack, since I had rarely used it on this trip. The next day, I received the following email:

Dear Marcus Cranston
It was our highest pleasure to meet someone special like you. You stayed with us only for 4 hours(Checked In 08:00 AM – Checked Out 12:00PM) yesterday at 11’th April. You were first time here in Bangladesh with your magnificent journey for raising the awareness for Parkinson’s disease. Sir, willingly I have experienced something from your website & delighted to know that what an outstanding way that you are contributing to raise awareness! Personally I was there at that time to get the rare chance to meet you & as a hospitality industry, we were pleasured for being a part of your 4 hours illustrious journey here in Bangladesh. But Sir, unfortunately at the time of leaving our property you forgot to bring your mobile(I-Phone) with you. We found that on your room that you stayed with us. However right now your mobile is in our safe hand. So, what would you prefer to do or would you please suggest us that with which way/how can we give back your mobile to your hand? We are waiting here for your feedback. Wish you all the best for ‘’Run-the-World 4 Parkinson’s Disease’’ & for the rest of your journeys till the end on 5’th May at United  Kingdom.

Have a beautiful day ahead & delightful tomorrow.

Posted by Marcus Cranston at 4:52 PM