Egypt - Pirates of the Cairo-bean

Originally, I planned to post photos from Cairo without a story. My stay was to be only a few hours.  My plan was to run around the pyramids, watch the nightly light show and quickly return to the airport.  I figured some of the best photos of my journey would be from here. 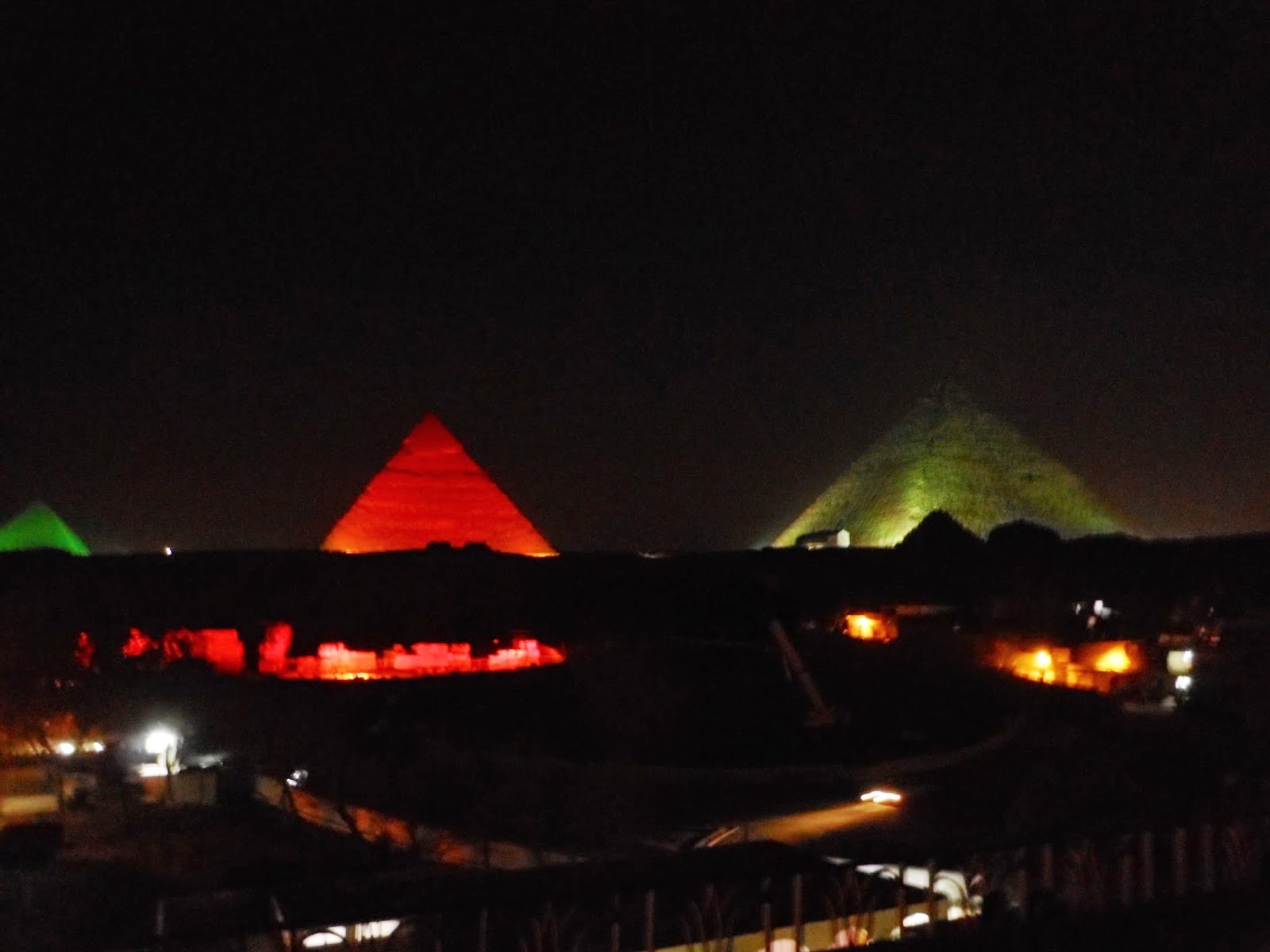 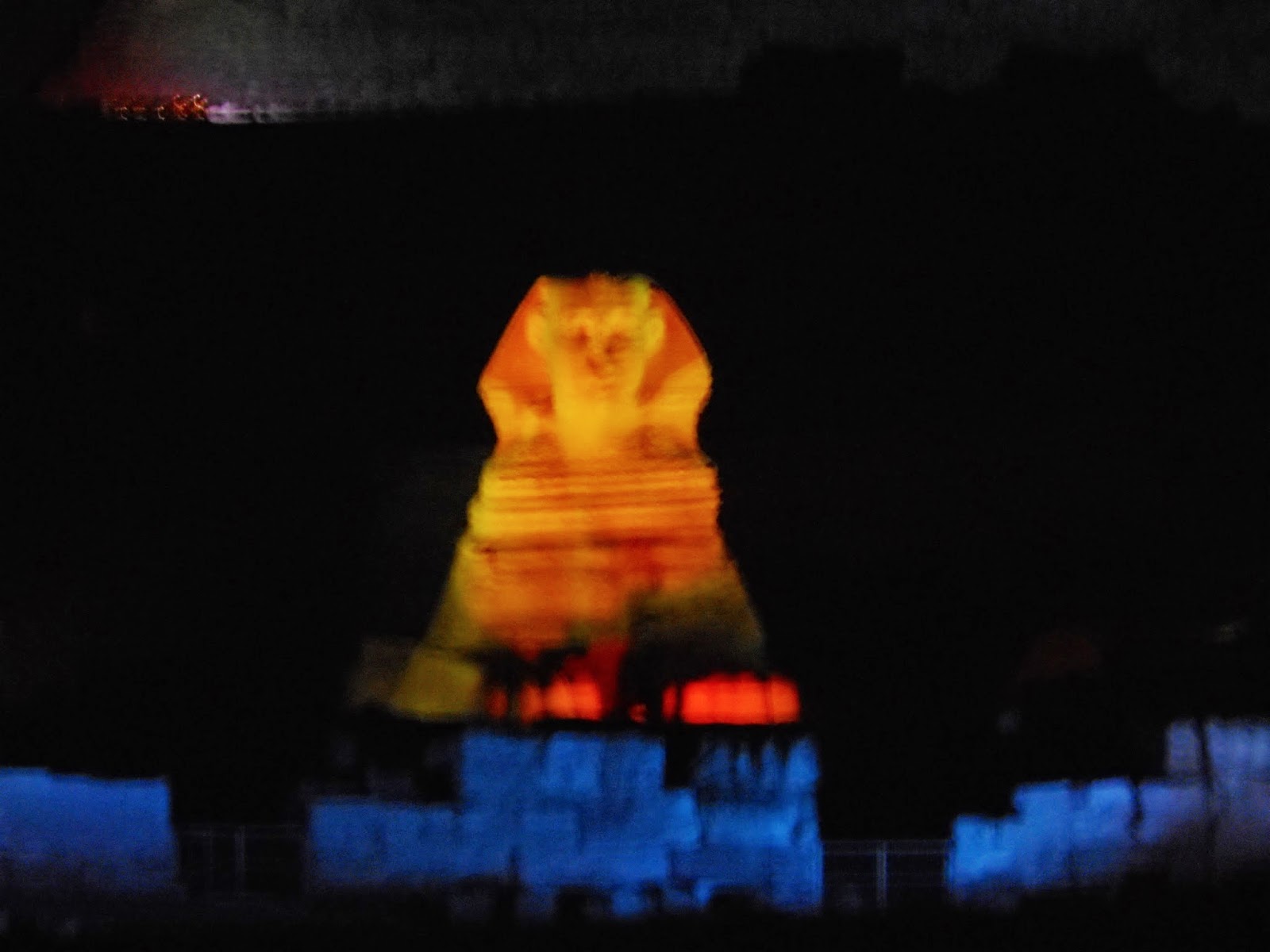 When I inquired at the baggage office and information desk about left luggage I got a surprisingly (though given my last brief visit to Cairo, I guess I should not have been surprised) rude – “It isn’t possible!” and “Not Allowed!”  I quickly solved this problem by booking a room online at a guest house a block away from the entrance to the Sphinx.  I just had to fight off the taxi vultures for 10 minutes while doing so.
Empowered by my previous research regarding Cairo taxi fares and experience avoiding scams for the past 2 weeks, I plowed through the swarm of “taxi drivers” in the arrival hall – all of whom only quietly muttered their promotional lines and cower when you loudly state that you would rather get “a taxi from the official stand outside”.  I followed the signs to the “Taxi Park”.  However, I’m still not sure if I found the official taxi park, but when I came to a row of black and white cars in one area of the parking lot, I began negotiating with the drivers.  I followed my usual procedure to go to the first car in the line.  I figure if there is an official procedure, I will be picking the right vehicle and if there isn’t a procedure at least I will be randomly selecting a car rather than ending up with the car with the most aggressive salesman.  Whichever was the case - this time the strategy backfired in a big way.  The driver of the car in pole position did come with recommendations from his colleagues.  “This driver is very, very good.” “He is from the government”.  In addition, he had a home-laminated card around his neck that reportedly verified that he was an “official taxi”.  We settle on a price, I get in the car, and the drive promptly turns too sharp to the right and slams the side of his “taxi” into a concrete post at the edge of his parking space.  Fortunately, his pit crew only needs to hand him the piece of trim that was knocked off through the passenger side window and we are on our way.
The next 10 minutes were uneventful and I started planning my run in my mind, when suddenly traffic stops – on the freeway.  Not stop-and-go traffic – STOPPED traffic – on the freeway.  After a few minutes, people began to take matters into their own hands to find out what the delay is about by getting  out of their cars and walking…on the freeway!  The delay did, however, allow me to watch the traffic which was flowing nicely in the other direction, despite the presence of horse drawn carts…on the freeway!!  Then after 10-15 minutes traffic began to move again and was quickly free flowing as if nothing happened. 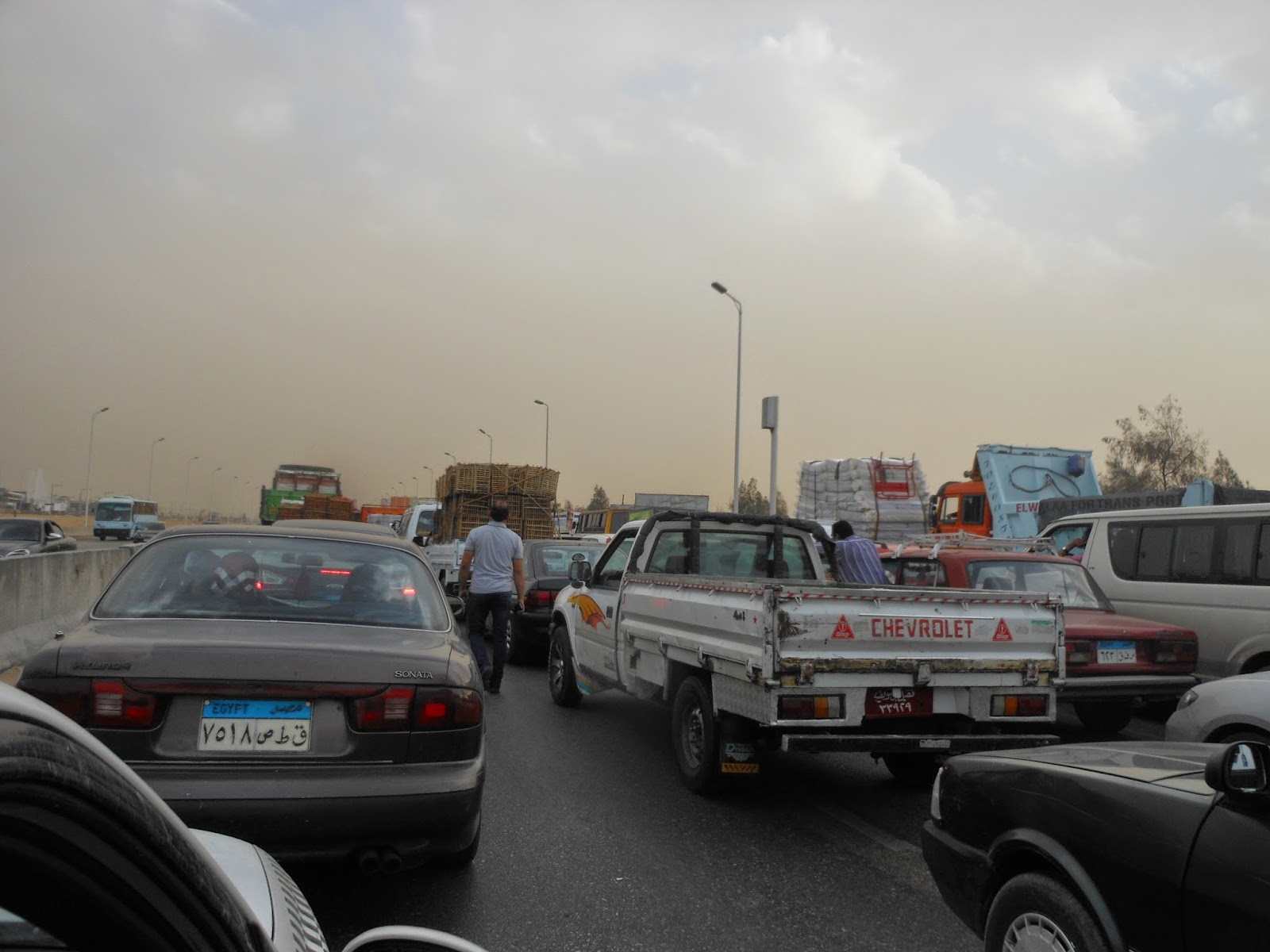 The 4-5 phone calls in the next 20 minutes made it all too clear that the driver did not know where the guest house was.  However, given that he was traveling in the direction of Giza – I didn’t worry too much.  Outside of the traffic jam, the most remarkable sight (and smell, and taste, and feel) on the trip from the airport to Giza was the air pollution.  Cairo made what I had seen in Beijing and Kathmandu look like poster children for environmental action. 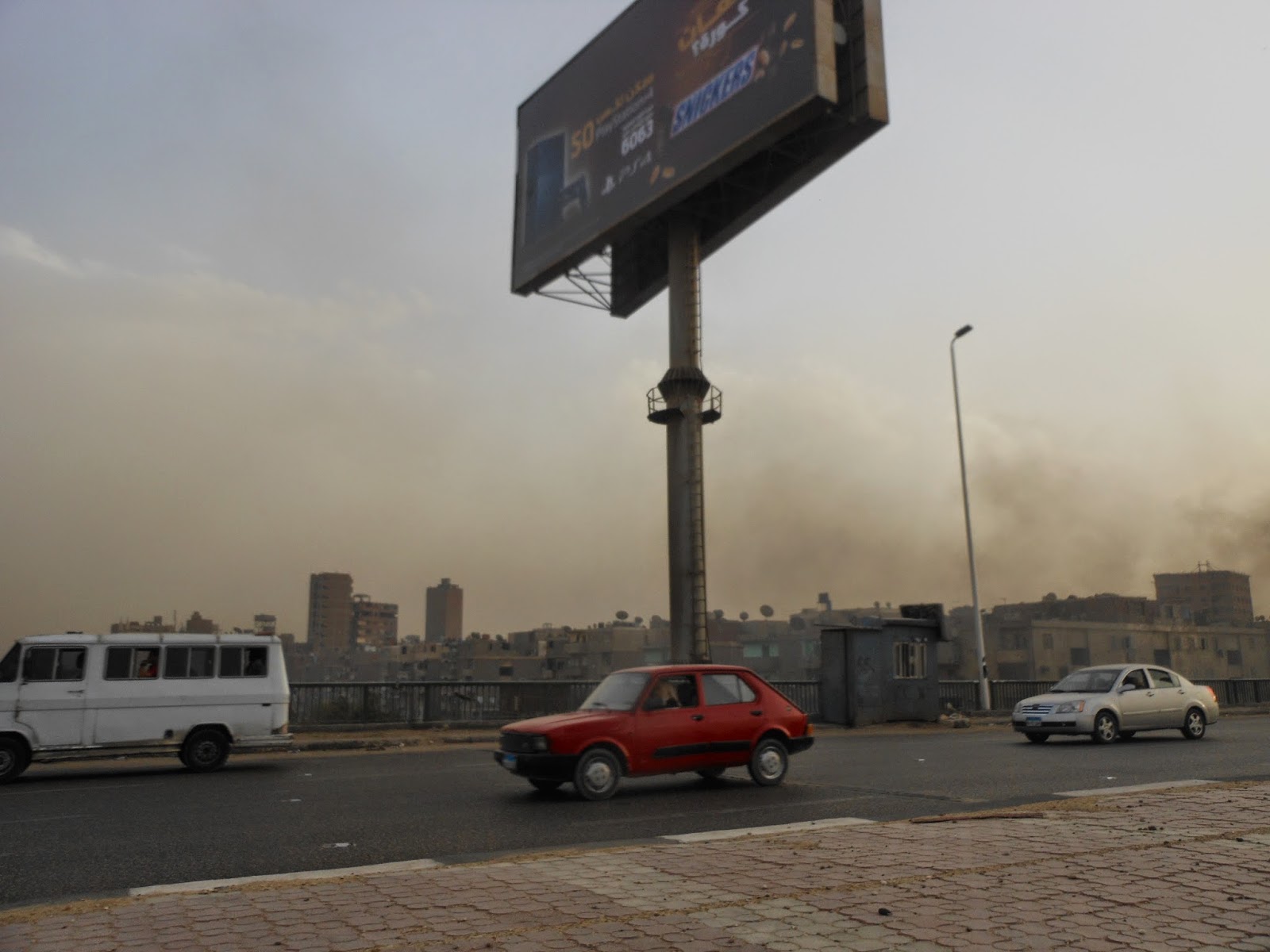 The first glimpse of the pyramid seemed to make the sacrifice worthwhile, as you could see tip of the pyramid towering over the other buildings at sunset. 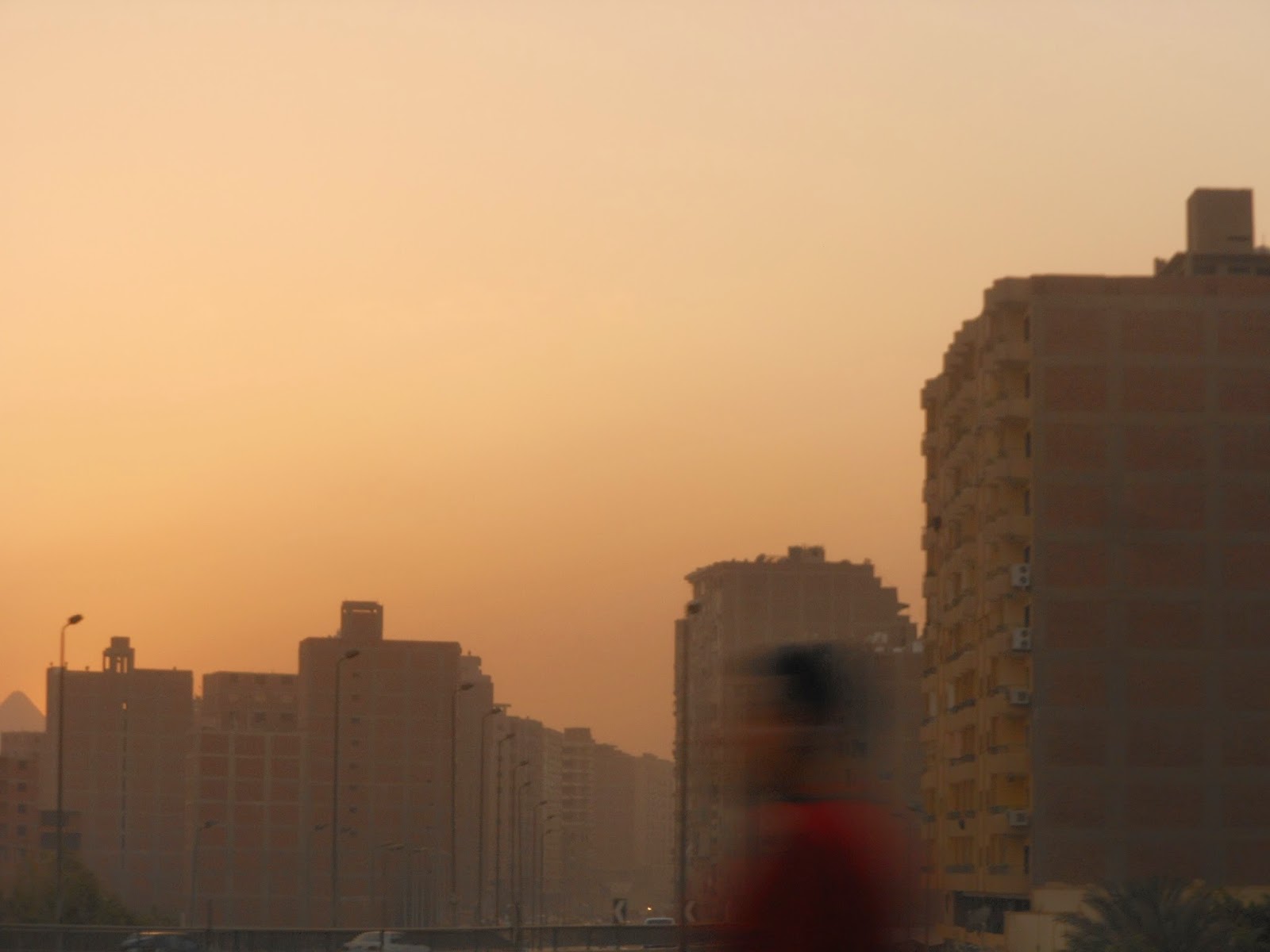 After the driver queried 5-6 people on the street regarding the location of the guest house, it was clear he didn’t know where it was (not surprising), but it also became clear that he didn’t even know how to get to the Sphinx (alarming).  With each questioning we got a little bit closer and we finally got a good view of the pyramids. I decided I better take the opportunity to shoot some video before the sun went down.  And then it happen…


At first I thought the 2 guys that appeared out of the nowhere, as we were slowly moving through traffic, were simply addressing the driver.  Quickly, my instincts told me this may be a distraction to get my camera or my bags.  I subtly stored my cameras, wallet and passport in my bags and leaned across them, strategically grasping the handles to ensure there would not be a quick grab-and-go operation.  It was then that the pirates boarded our vessel.  The captain jumped in the front passenger seat and given that my bags and I took up the entire back seat, the first mate opted for a seat on the trunk of the car.
I was relieved when the ransom demand was the same as the shopkeeper on the street.  “You come see my shop, then I show you hotel, because driver not know hotel”.  Fortunately, I was loaded with legitimate excuses – I had tickets to the light show and it was starting in 20 minutes, I had to go back to the airport in less than 2 hrs, etc.  The captures quickly moved to a simpler strategy – which was not clearly stated, but understood by all – if you give me money, I will show the driver how to get to the hotel now.
At this point I decided to go on the offensive.  Over the years I have developed a relatively fool proof strategy.  Whereas I used to dread the approach of the aggressive foreign salesman that aims to make you feel uncomfortable, I know opening engage them to gain the upper hand.  This is successful, when you understand a couple facts. First, although their English appears fluent at first – they are often limited to a vocabulary that is focused on their sales or scams.  Second, just as you are caught off guard when they engage you – they are even more off guard when you engage them.  Finally, and most importantly, these guys are usually harmless and will move on quickly when they find that you are not as vulnerable as they initially thought.
With that in mind, I started the banter with the captain.  If he is going to direct my driver to the guesthouse – I wanted to interview him for the job.  Does he know the guest house?  Is it a good guest house? Does he often jump in cars and offer to direct people to their guest house? And of course, how much does he charge?  He was not prepared to answer these questions, so just gave me the standard “No problem, my friend” and “Yes, yes” - except for the price which he decides to begin the negotiations at $20.  When I let him that is ridiculous and suggest I’ll think that I will just get out here and grab another cab. He quickly changes the subject.

This doesn’t help his cause much.  When I say that I am from the US, he lets me know that he has been to the US…California.   What a coincidence I live in the state right next to California – so ask which city did he go to?   He is clearly puzzled and doesn’t respond.  So I push the issue – What city?  He finally answers “New York.”  When he asks me for the second time where I am flying to tonight – I put him on the spot.  “You know the answer to that question, because you asked me a couple minutes ago”.  He grins sheepishly.  I don’t let him off easily, “Come on, you remember”.  I give him a hint, “Remember you went diving there with you uncle”.  He correctly answers “Yes, Doha”.

All the while, I have a general idea that we are going in the direction we need to go, we are remaining in crowded traffic and I have a clear exit that I can employ with my bags in hand if need be – so I am actually beginning to feel fortunate that we have been provided this help with our navigation problem.  Sure enough within a couple minute we arrive at the entrance to the Sphinx and I am the first to spot the guest house, despite the fact that I am the one from the other side of the world.  Now I let the driver and pirates know the terms of the deal  - I am going to settle all payments AFTER I get out of the car.  The captain had already downgraded his demand to $10 early in the route – which was a decent price and since that was the smallest denomination I had and I didn’t figure I was going to get change – I went with that as my ransom. The driver I paid in Egyptian money.  As I walked away and the first mate plead from the top of the car, "What about a dollar for me?"  Feeling quite pleased with myself and a little cocky at this point, I told him he should settle his wages with the captain before he goes on the next mission. 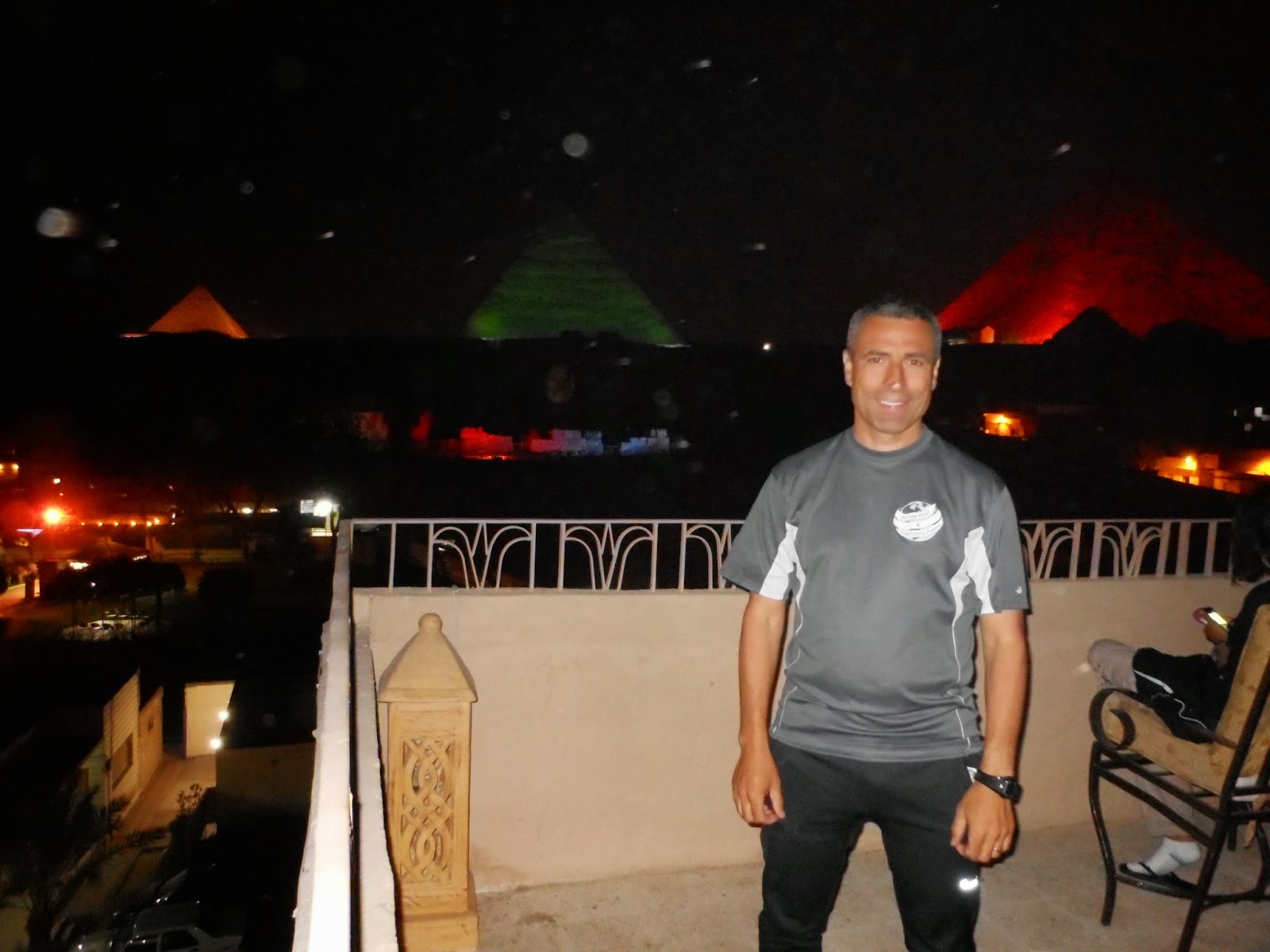 In all honesty, there are dangerous associated with travel and for all family and friends following me (especially Lila and the kids) – this story should reaffirm my travel skills and hopefully make you realize that I am in less danger that average.

Also, although this was a frustrating few hours in Egypt, the overturned and burned car in my running picture and the entrenched tanks at the airport and along the highway are stark reminders that the Egyptian people have recently had far worse difficulties than I had this evening. 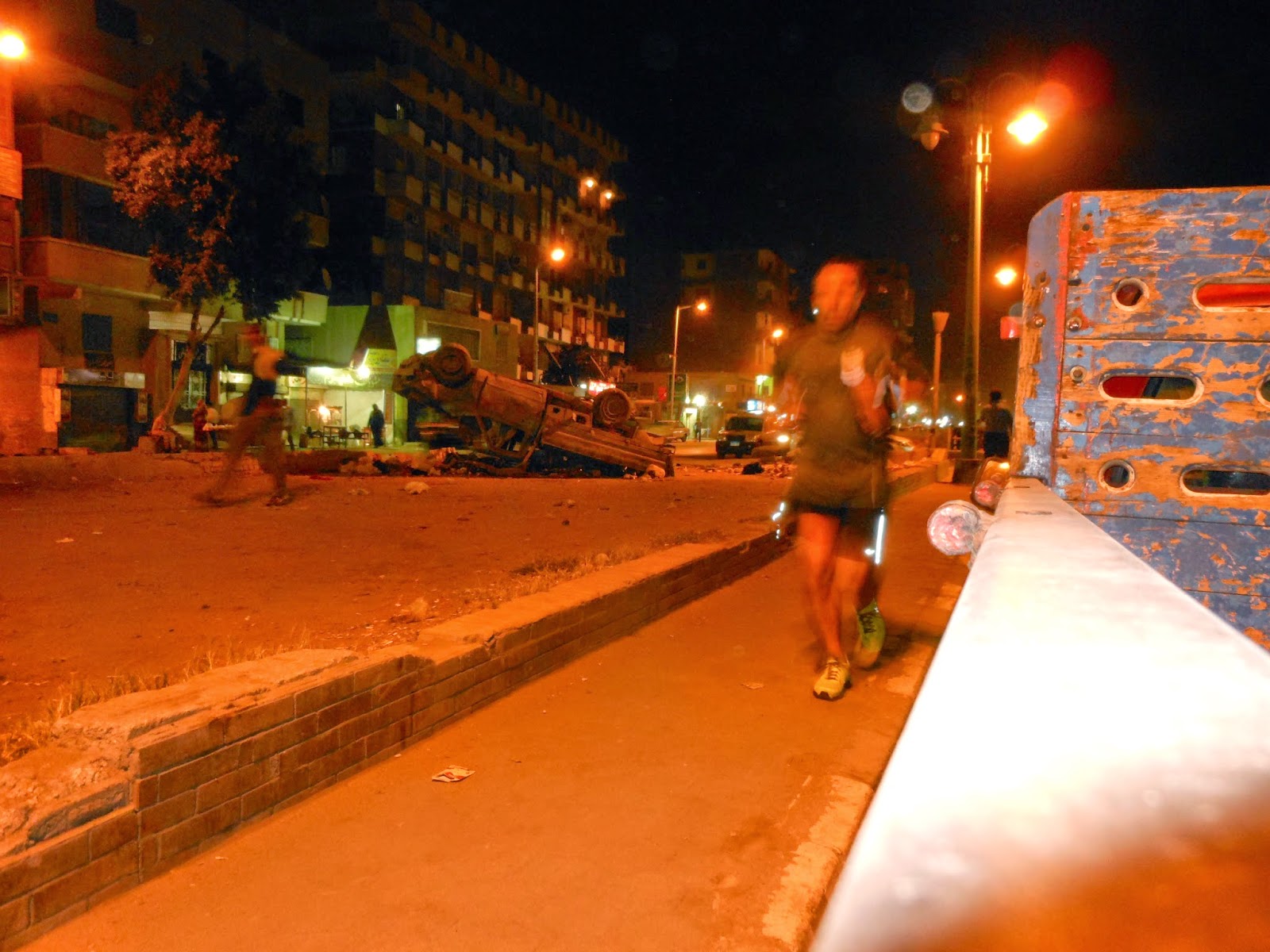 Posted by Marcus Cranston at 8:04 PM